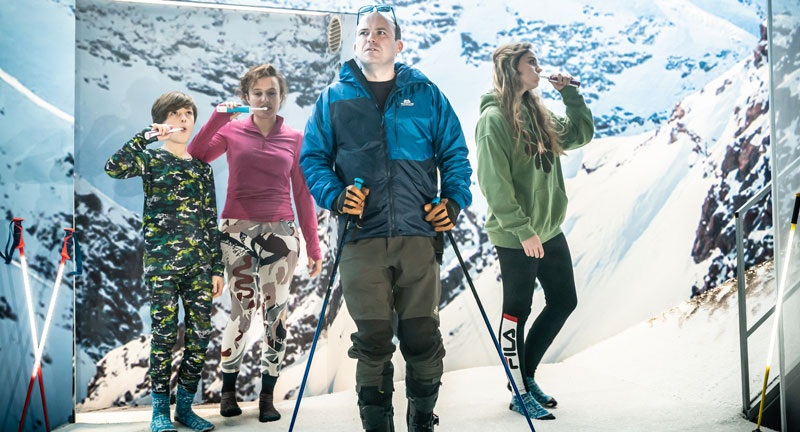 With its stunning cinematography and ski-slope drama, Ruben Östlund’s 2014 film Force Majeure seemed a surprise choice for a stage adaptation when it was announced by the Donmar Warehouse’s artistic director, Michael Longurst, two years ago. After Covid-19 delays, it has finally begun its run, proving that this intense story exploring relationships and masculinity works just as well, albeit differently, as a piece of theatre.

It follows Swedish husband and wife Tomas and Ebba and their children Vera and Harry who have come to a French ski resort for a week’s break from their busy lives for some rare family time together. Everything changes when an avalanche appears to threaten the resort, prompting Tomas to flee for his life without any thought for anyone else including his wife and family. It is the catalyst for exposing the fissures in the couple’s relationship and Tomas’s traditional sense of his masculinity when he is forced to question whether he is the hero he imagined himself to be.

Thanks to Longhurst’s direction and Tim Price’s accomplished adaptation, the comedy is broader and more laugh-out-loud than Östlund’s gentler comedy drama while the themes have been distilled and made more explicit. The ambiguity of the last scenes of the film has been largely lost, although the presumably unstageable finale on an alpine road has been cleverly reworked.

Rory Kinnear and Lyndsey Marshal are brilliant as Tomas and Ebba as they try to navigate the emotional and psychological crisis that hits them. Sule Rimi and Siena Kelly stand out as their friend, Mats, and his girlfriend, Jenny, who hilariously try to cope with the troubled couple before finding their own relationship under strain.

Jon Bausor’s steeply angled white platform shifts from ski slope to bedroom, enhanced by Lucy Carter’s lighting design. You can almost feel the chill of the snowy slopes when the cast set off on their skis, aided by the work of movement director Sasha Milavic Davies. Many of the features of the film – including a ubiquitous vacuuming cleaner – have been ingeniously integrated into the stage version, capturing the essence of the original while creating a new and entertaining play that leaves you questioning how you would react in a moment of crisis.

Running at the Donmar Warehouse in London until 5 February 2022.