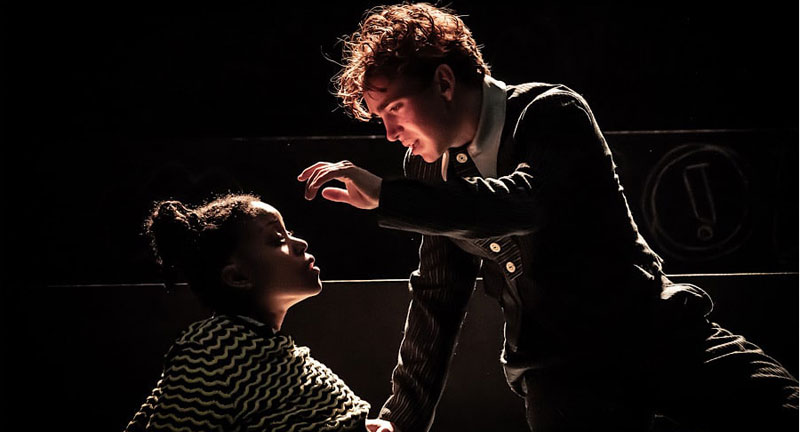 The musical based on Frank Wedekind’s 1891 play Spring Awakening was a hit on Broadway in 2006 but made less impact when it came to London’s West End three years later. Rupert Goold’s revival at the Almeida offers a fresh and exciting new take on the show that suits the darkness of the story.

Set in Germany in the early 1890s, the musical turns the narrative into a more timeless tale of teenage angst and rebellion, injected with a modern vernacular and a rock-style score that bring it right up to date. It follows a group of young people navigating the stresses of emerging sexual desire, exams, parental cruelty and reactionary systems. Wendla begs in vain for her mother to explain the facts of life, while Melchior has plenty of learning but no experience or emotional maturity. Their troubled friend Moritz battles with trying to understand his sexual awakening that feels at odds with their Protestant community which instructs them that bodily desire is immoral.

Under Goold’s direction, they are school children gossiping and giggling over crushes while teetering on the brink of adulthood, ordered by parents and teachers to grow up but without being given the knowledge to do so. Miriam Buether’s stark design places them on steep steps like bleachers in a school gym, constructed of blackboards which the cast – and video designed by Finn Ross – cover in chalk markings.

The music by composer Duncan Sheik, jointly orchestrated with Simon Hale, is haunting, rousing and compelling, with lyrics and book by Steven Sater. It tingles the spine from the moment Wendla shares her anxieties with the first song, “Mama Who Bore Me”, a lament that becomes an anthem of frustration. The show-stopping “Totally Fucked” is a particular cry of rebellion and outrage, emphasised by video chalk markings that link it to modern injustices and bigotries. There are also songs of aching beauty, in particular the finale, “The Song of Purple Summer”, as well as moments of humour to lighten the darkness. This production also restores a song cut from the 2006 Broadway production, “There Once Was a Pirate”, a ballad of separation that harks back to the pirate games the children have only just grown out of playing.

In the smaller space of the Almeida, the musical has greater intimacy and rawness, enhanced by a more anglicised sound to the language. Despite the modernity of some of the lyrics, it feels more located in the 1890s than the original production, complemented by Nicky Gillibrand’s costume design. The energy of the show is undiminished, with Lynne Page’s choreography adding a fierce physicality that at times becomes a riot barely under control.

The talented, mostly young cast features some outstanding performances. As Melchior, Laurie Kynaston proves himself an expressive singer as well as a fine actor, while Amara Okereke perfectly embodies Wendla’s child-like innocence mixed with self-will and desire. She has a stunning voice too. Stuart Thompson is gentle and vulnerable as Moritz – and particularly heart-breaking when he sings “Don’t Do Sadness” – but without the manic energy that has characterised previous incarnations of the role. Carly-Sophia Davies shines in the smaller but vital role of Ilse, the goth-like girl cast out by the community, who haunts the action throughout. Catherine Cusack and Mark Lookyer are excellent in all the adult roles, at times coming across as grotesque monsters – a credit to Carole Hancock and Nina Van Houten on wigs, hair and make-up. For fans of Spring Awakening (like myself), this is a must-see new production – and one that must surely gain more admirers for this powerful coming-of-age musical.