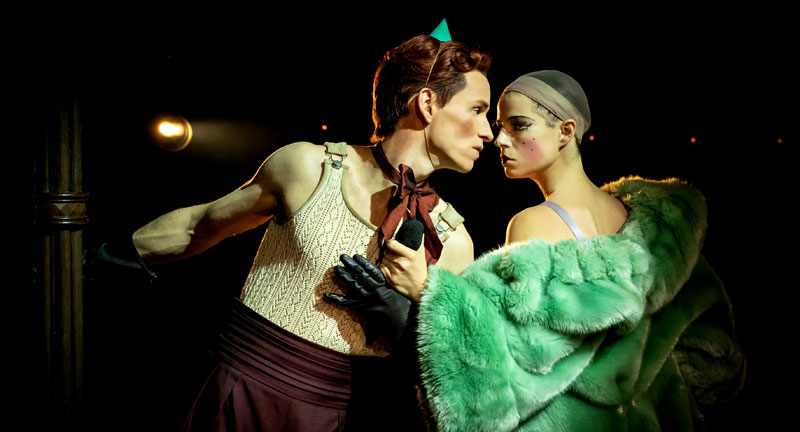 Any revival of Kander and Ebb’s 1966 musical Cabaret comes with baggage. The iconic film version, directed and choreographed by Bob Fosse and starring Liza Minnelli, has been followed by acclaimed new interpretations in the West End and on tour, creating unforgettable images and performances. Award-winning director Rebecca Frecknall has turned her back on these and taken a fresh look at the book and music, helming a mesmerising and visually stunning new vision for the show.

Some of the choices are surprising but that makes it all the more interesting, especially for anyone familiar with past productions. The stage is literally set as soon as the audience enter the building, with the Victorian interior of the Playhouse Theatre, and its frontage, transformed into the fictional Kit Kat Club at the heart of Joe Masteroff’s story, based on a play by John van Druten and books by Christopher Isherwood. The traditional proscenium design has been replaced by a stage in the round where the cabaret venue’s performances are woven into the narrative.

Omari Douglas is excellent as the sweetly innocent young American writer, Cliff, who has come to Berlin at the start of 1930 to find material for his novel and ends up witnessing the rise of the Nazis. He becomes friends with his long-suffering landlady, Fräulein Schneider, and another of her lodgers, a Jewish grocer, Herr Schultz, whose blossoming but troubled romance is beautifully told in two powerful performances by Liza Sadovy and Elliot Levey. Anna-Jane Casey shines as the sailor-loving lodger, Fräulein Kost, while Stewart Clarke brings plenty of charm and a hint of menace as Cliff’s German friend, Ernst Ludwig.

The stand-out performance is Jessie Buckley as the glorious but fragile Sally Bowles. She is as impressive singing the comic masterpiece “Don’t Tell Mama” in a pair of lacy pants as she is in a stripped-back “Maybe This Time” and a raw, tortured “Cabaret”. Through it all, Eddie Redmayne is ever-present as a sinewy, sinuous Emcee, brilliantly performing the cabaret songs that provide a gloss to the main narrative such as “Money” and “If You Could See Her”. He and the superb ensemble twist and bend in Julia Cheng’s striking choreography, combining a dynamic fluidity with moves that are sometimes close to contortion.

With Tom Scutt’s spare, expressionistic design and Isabella Byrd’s lighting, the circular stage revolves and changes throughout, creating a space that can be Fräulein Schneider’s busy guesthouse one moment and a Weimar-era cabaret club the next. The band, under musical director Jennifer Whyte, magnificently bring sparkle and spirit to Kander’s music, expertly balanced with crystal-clear vocals thanks to sound designer Nick Lidster. Along with its immersive setting, this masterful, inventive revival is an experience not to be missed, joining the list of the musical’s unforgettable productions.