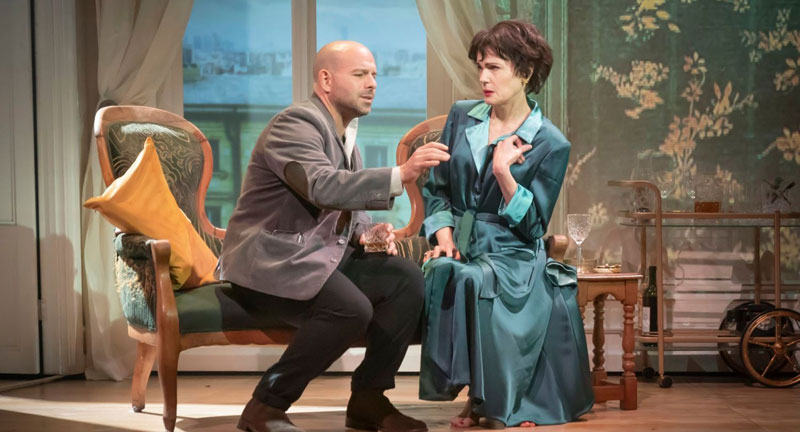 Two years before she died, the great Hollywood star Ava Gardner enlisted British journalist Peter Evans to ghost-write her autobiography. She ended up blocking its publication, but 23 years after her death, Evans gained permission to bring out a book featuring their interviews. These dialogues inspired actor Elizabeth McGovern to bring Gardner’s story to the stage as Ava: The Secret Conversations.

Distilled into 90 minutes, it offers glimpses of the real woman behind the myth through McGovern’s brilliant portrayal of Gardner – at times reminiscent of one of Tennessee Williams’ larger-than-life female characters. Through the conversations, we learn about her life from her childhood on a farm in North Carolina through to her marriages to three stars of the time: movie star Mickey Rooney, band leader Artie Shaw and another legend, Frank Sinatra.

Anatol Yusef rises to the challenge of playing not just Evans but all three of Gardner’s husbands, as the story shifts from the interviews at the retired star’s Knightsbridge home to memories from her past. These transitions benefit from 59 Productions’ set and video design and Elliot Griggs’ lighting, with the stage raised and framed like a cinema screen. McGovern also impressively embodies the star’s different ages from a fresh 18-year-old wannabe starlet to a 65-year-old living with the after-effects of a stroke.

Gardner’s story is fascinating for anyone interested in film and the Golden Age of Hollywood, referencing some of her best-known movies from Show Boat to The Barefoot Contessa as well as other stars of her era. As a journalist who is in the middle of ghost-writing an autobiography, I was especially interested in how it presents this process, with some uncannily familiar conversations between interview and interviewee (although I have so far avoided falling in love). Directed by Gaby Dellal, it is an enthralling piece of theatre that brings to life Gardner’s incredible life story.

Running at Riverside Studios until 16 April 2022.