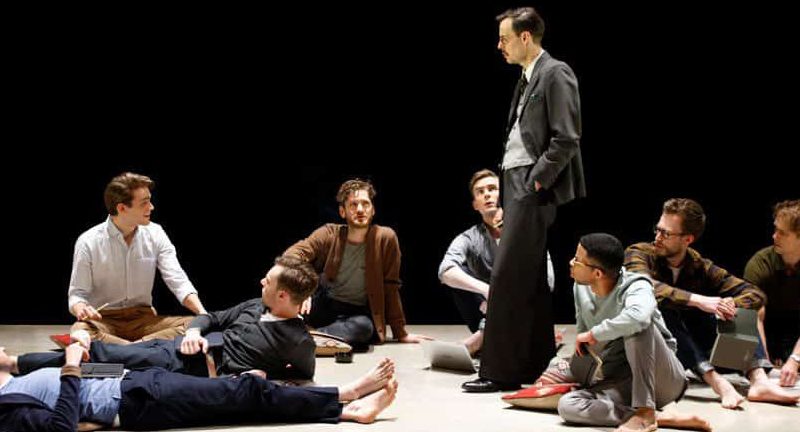 In Howards End, EM Forster famously wrote of the need for people to “only connect” – a philosophy that ran through all his fiction. In The Inheritance, Matthew Lopez has drawn on this classic novel to explore different kinds of connections, both between friends and lovers and between the generations. Loosely using the book’s structure and characters as a starting point, the two-part play follows the lives of a group of gay men living in New York in the present day and the legacy of past lives, most notably the decimation of the city’s gay community with the outbreak of AIDS in the 1980s.

Centring on young couple Eric and Toby, it opens on a carefree Obama-era world of dinner parties, brunches and concerts, celebrating a time when gay men are free to marry and have children together. Against the backdrop of the election of Trump and fears about LGBT rights being eroded, the couple’s own world comes under threat as they face eviction from their rent-controlled three-bedroom Upper West Side apartment – Eric’s family home since his grandparents moved there after the war.

For Lopez’s characters, homes are central to their sense of safety, and without them, they are in danger of becoming rootless and losing their way. This is seen most keenly in the house that Eric is bequeathed by a friend, Walter, albeit without his knowledge early in the story – the key plot device borrowed from Howards End. Located north of New York City, this quaint colonial-style mansion has been a place of safety and healing throughout its 400-year history, with its own part to play as a refuge during the AIDS epidemic.

They characters are also driven by a need to escape. In a positive way, this is through the power of literature to open up the mind to new ideas and experiences. Homeless prostitute Leo is able to see a new direction in his life after Toby takes him under his wing and introduces him to great literature. Less positively, fears of intimacy and the AIDS epidemic drive Walter’s partner, Henry, to run away from their home in upstate New York to throw himself into work and world travel. Toby himself is in constant flight, escaping his dysfunctional family background through a fake back story of privilege that makes him something of a lost boy – driven home by his full name, Toby Michael Darling, inspired by Wendy’s brother in Peter Pan. Rather than confronting his past, he avoids the truth by turning his personal fiction into a book and then a play and losing himself in alcohol and drugs.

Despite these serious themes plus some heart-breaking moments and scenes of meaty polemic about gay life and politics, The Inheritance is often very funny. It is packed with cracking one-liners as well as a knowingness about itself as a literary work. EM Forster himself appears on stage to guide the action for much of Part One, creating the story in collaboration with the characters – a meta-fictional layer that Lopez controls masterfully. Forced to confront his own fears of being outed and his refusal for his gay novel Maurice to be published until after his death, Forster is brought to vivid life by Paul Hilton. He also brings great power to his portrayal of Walter, who provides a chain of memory back to less tolerant and more fearful times.

John Benjamin Hickey is excellent as Walter’s partner, Henry Wilcox – the only character to take his name from Howards End. As a Republican-voting Trump-supporting property developer, he provides a counterpoint to the liberal outlooks of the other gay characters, although ultimately his attitudes are found to be wanting in his lack of responsibility and connection to a wider community. Kyle Soller is compelling as Eric whose journey to find purpose and security in his life is the thread running through both parts. Andrew Burnap brings both intense energy and humour to Toby, while Samuel H Levine is impressive in the two roles of the broken drug-addicted Leo and privileged wannabe actor Adam. They are part of a fine ensemble, from rising stars such as Hubert Burton and Luke Thallon through to Vanessa Redgrave in a small but moving part that provides another connection to the past. Paul Englishby wraps their performances in a gently uplifting score that ensures the production delivers plenty of emotional punches.

Despite being in two parts over something like seven hours, Stephen Daldry’s tight direction means it never drags, drawing you into these people’s lives and caring about their futures. There are lines and plot twists that elicit audible gasps in a play where the characters often speak directly to the audience. Bob Crowley’s simple but effective design, impressively lit by Jon Clark, allows the actors to watch from the sides of a bare simple platform as if they – like the audience – are sharing in the story. It is all part of The Inheritance’s celebration of community as the ultimate safe place, through friendship and responsibility and through understanding what we have inherited from those who came before.