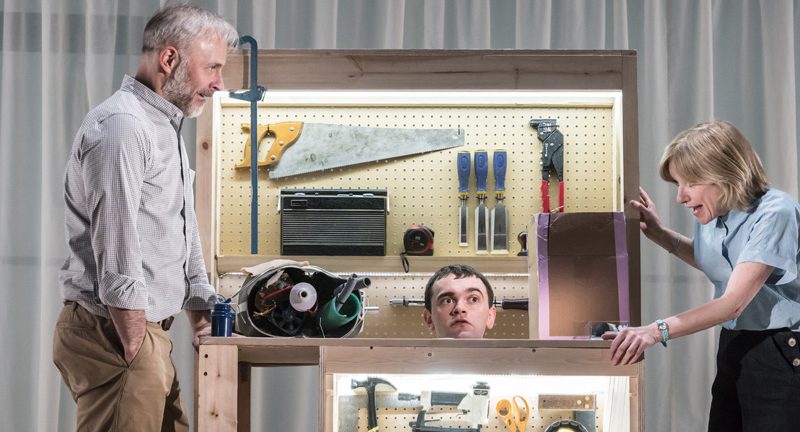 However carefully you read the instructions of your flat-pack furniture, the chances are you’ll find it doesn’t always come together as planned. The premise of Thomas Eccleshare’s new satire, Instructions For Correct Assembly, is that this applies just as much to parenting – you can strive to give your children a safe, supportive upbringing and follow all the rules but there is no guarantee they will turn out perfect.

Anyone who has tried to build an Ikea bookshelf or be a parent will find resonances in this fantasy about a nice middle-class couple, Harry and Max, who purchase a flat-pack teenage robot called Jån. Eccleshare mines plenty of clever comedy in their faltering efforts to fit the pieces together and come up with the settings that create the “white and polite” model they crave. Like a real-life child, Jån learns from his environment, often leading to errors such as obscenities or far-right sentiments, but these can always be adjusted with a tap of the remote or a twiddle of the processing chip.

However, it quickly emerges that their realistic robotic boy bears an uncanny resemblance to Nick, the son that Harry and Max are grieving. Like Eccleshare’s previous play Heather, the light-hearted elements of fantasy and theatrical device are a way to explore more serious themes, in this case a couple’s sense of loss and their fear that they have failed as parents. Thanks to strong performances by Mark Bonnar and Jane Horrocks as Harry and Max, there are powerful moments of emotional clarity when this comes to the fore but there is a tendency for it to be overwhelmed by the overall concept.

Brian Vernel is excellent as both the hilariously unpredictable Jån and troubled teen Nick while Michele Austin, Jason Barnett and Shaniqua Okwok are family friends watching Hari and Max’s new project with sympathetic but bemused fascination. It is inventively directed by Hamish Pirie, with an ingenious set by Cai Dyfan made up of flat-pack-like straight lines and layers that dismantle as the truth of the play emerges – with polystyrene packing balls never far away. In its tale of a robot child, ending with a small twist, the idea will seem familiar to fans of TV series like Dark Mirror and Philip K Dick’s Electric Dreams but, with its strong cast and striking design boosted by a touch of illusion, it is smart and entertaining, confirming Thomas Eccleshare as a writer to watch.