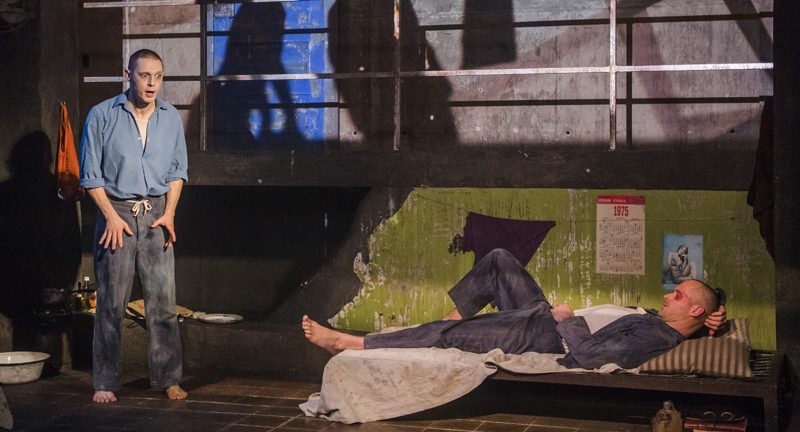 Manuel Puig’s classic novel Kiss of the Spider Woman has been through several incarnations, including the author’s own stage version, a film and a musical, but the new production at the Menier Chocolate Factory goes back to the source. Puerto Rican playwright José Rivera and British writer Allan Baker have adapted the original 1976 book to create an intimate, intense drama of love, friendship and what it means to be free.

Set in Argentina during the repressive, turbulent period of the mid 1970s, it follows the developing bond between two very different men: Molina, a camp, sensitive gay window dresser who has been jailed for gross indecency, and Valentin, a brutish, heterosexual political agitator who has been tortured after being suspected of a terrorist attack. As the weeks go by in their shared cell in a Buenos Aires prison, they find a connection through Molina’s re-telling of his favourite classic movies, nurturing a relationship that frees itself from conventions about gender and sexual orientation.

The pair also find a kind of freedom through imagination as Molina recalls a succession of camp B-movie melodramas from film noir to zombie horror, beautifully brought to life on Jon Bausor’s stark prison set through animated shadow-like projections from Andrzej Goulding. Otherwise, the focus is on the two men with occasional reminders of the regime through a stern prison warden played by Grace Cookey-Gam.

Samuel Barnett is powerful and moving as Molina, a garrulous bundle of barely contained nervous energy, counterpointed by Declan Bennett as the tough, brooding Valentin who tentatively learns to explore more tender emotions beneath his anger over political injustice. Under director Laurie Sansom, the emotional connection between the two men is slow to build as they stick to their own sides of the cell/stage but, once they bond, it becomes more charged as they share each other’s space. Surprisingly funny at times, the production has plenty of touching moments without becoming sentimental. While this odd couple find a private freedom with each other, the frequent disruptive blasts of the prison klaxon underscore that danger is never far away.