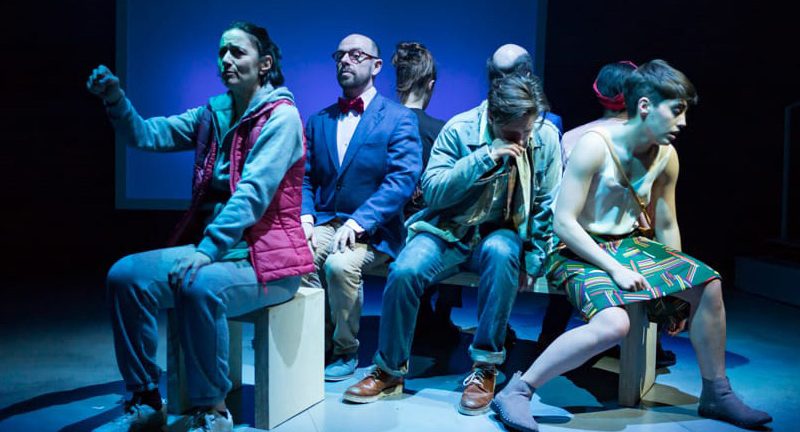 Reality shifts for Turner Prize-winning artist Simon Dykes who wakes up one morning to find he is a chimp in a chimp-run world where humans are an uncivilised species living in zoos and the African jungle. This is the starting point for a witty and unsettling new stage adaptation of Will Self’s novel Great Apes that highlights the thin line between primitive and civilised behaviour and explores what it means to be human.

The skilful adaptation by Patrick Marmion fortunately departs from the novel’s original conceit that civilised chimps communicate through only gestures, howls and grunts. The howls and grunts are still there, but these apes also speak fluently in English of philosophy, literature, psychology and science. They use Twitter and YouTube, shop at Ikea and watch Love Island, bringing in satirical humour about modern life, from art to office politics.

You cannot fault the actors’ commitment to behaving like apes as they strut around the stage, groom and sniff each other, kiss bottoms and generally behave like chimps straight out of a David Attenborough nature documentary. There are no chimp masks or costumes, apart from loose brown trousers to signify how these civilised apes view clothing below the waste as taboo. It is down to the cast with movement director Jonnie Riordan and chimpanzee physicality and vocalisation expert Peter Elliott, who ensure you quickly suspend disbelief that you’re not actually watching chimps talking about Wittgenstein, Dante and Freud. Simon’s disturbing new reality is given added edge through the startling soundscape of sound designer Dan Balfour with lighting design by Matt Haskins.

Despite the absurd premise, Bryan Dick is intense and believable as Simon who has to confront his new chimp reality. The cast masterfully pull off this bold concept with all the earnestness needed to make it funny, including Ruth Lass as eminent psychiatrist and alpha male Dr Zack Busner who takes on Simon’s case. It is tightly directed by Oscar Pearce but, while it is only two hours long, it is – like the 500-page book – an extended fable based on one idea, too reliant on wordplay and the comedy of recognisably human characters acting like chimps, however amusing that might be. But there is no denying this is a memorable piece of theatre that will make you look anew at your fellow humans.