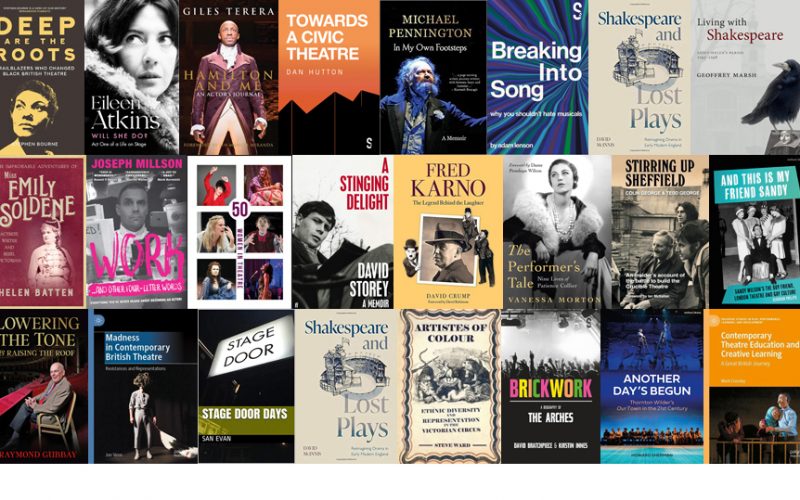 The longlist for the annual STR Theatre Book Prize has been published, offering a selection of 35 theatre-related titles that were published in 2021.

Created in 1998 by the Society for Theatre Research, the prize aims to encourage the writing and publication of books on British-related theatre history and practice, both those which present the theatre of the past and those which record contemporary theatre for the future.

This year’s three judges are theatre director Jatinder Verma, who co-founded Tara Arts, Paul Vale who writes for The Stage, and Erin Lee, head of the National Theatre Archive. The panel is chaired by Howard Loxton, a member of the Society for Theatre Research committee.

A shortlist will be announced shortly and the winner on 9 June 2022. Find out more at str.org.uk.

50 Women in Theatre
An overview of influential women in post-war theatre including 25 interviews with leading female theatre-makers.

A Stinging Delight: A Memoir by David Storey
A powerful memoir by the artist, acclaimed playwright, Booker Prize-winning novelist and rugby player.

Another Day’s Begun: Thornton Wilder’s Our Town in the 21st Century, by Howard Sherman
This book shines a light on Our Town’s continued impact in the 21st century and makes a case for the healing powers of Wilder’s text to a world confronting multiple crises. It features extensive interviews with more than 100 artists about their own experience of the play.

Are You Going To Do That Little Jump? The Adventure Continues, by Robert Gillespie
Actor Robert Gillespie looks back at his career, taking readers into the world of the actor manager, the art of film, of commercial theatre, rep, ground-breaking fringe theatre, television, TV comedy, directing and producing in theatre, writing satire, and the surreal world of commercials.

Artistes of Colour: Ethnic Diversity and Representation in the Victorian Circus, by Steve Ward
This book explores the wealth and depth of talented Black and other ethnic performers and the largely forgotten contribution they made to the success of circus in the 19th century.

Breaking into Song: Why You Shouldn’t Hate Musicals, by Adam Lenson
Through a series of essays, this book asks what audiences can do to stay open-minded about musical theatre and what creatives can do to make new musicals better. Examining both sides of the divide, director and producer Adam Lenson asks how those who both love and hate musicals can further expand the possibilities of this widely misunderstood medium.

Brickwork: A Biography of The Arches, by David Bratchpiece and Kirstin Innes
The story of Glasgow’s legendary venue The Arches: nightclub, theatre, creative hub and party place.

Contemporary Theatre Education and Creative Learning: A Great British Journey, by Mark Crossley
An analysis of the relationship between professional arts practitioners and professional educators in Britain. It grounds theoretical elements in real-world challenges, featuring a broad range of practitioner and educationist voices.

Deep Are the Roots: Trailblazers Who Changed Black British Theatre, by Stephen Bourne
This book celebrates the pioneers of Black British theatre, beginning in 1825, when Ira Aldridge made history as the first Black actor to play Shakespeare’s Othello in the UK, and ending in 1975 with the success of Britain’s first Black-led theatre company.

First Act Shakespeare, by Robert Pennant Jones
An introduction to Shakespeare’s plays, combining scholarly insight and personal history. It offers a summary of each of the 37 plays, brought to life by illustrations by Clive Francis.

Fred Karno: The Legend Behind the Laughter, by David Crump
The remarkable story of the legendary acrobat, comedian, writer, music hall impresario, film producer and the undisputed king of slapstick.

Hamilton and Me: An Actor’s Journal, by Giles Terera
The actor and writer presents his intimate and revealing journal of his time playing Burr in Hamilton in the West End.

In My Own Footsteps: A Memoir, by Michael Pennington
The acclaimed actor, director and writer looks back on his extraordinary stage career.

Living with Shakespeare: Saint Helen’s Parish, London, 1593-1598, by Geoffrey Marsh
A microhistory of London’s St Helen’s Parish, revealing the lives of Shakespeare’s neighbours. It weaves primary research and discoveries together with historical narratives to transport readers into Shakespeare’s world and give them a real glimpse into his daily life.

Lowering the Tone & Raising the Roof, by Raymond Gubbay
Gubbay’s autobiography brings to life his extraordinary 50-year career as one of the most experienced and well-connected impresarios in British music and entertainment.

Madness in Contemporary British Theatre: Resistances and Representations, by Jon Venn
An exploration of the relationship between madness and performance. It tackles close readings of key plays by writers such as Sarah Kane, Lucy Prebble and debbie tucker green.

Namedropping in the Wings by David Collison
Collison, a renowned sound designer in the 1970s and 1980s, worked on more than 50 West End musicals. His memoir tells the story of an incredible backstage career in London theatre.

Nation and Race in West End Revue 1910–1930, by David Linton
This book sets out to explain how and why the London West End revue was such an exciting, popular and influential form throughout the 20th century. It calls for a new understanding of how popular musical performance forms operate and connects different popular theatre genres, linking revue to contemporary practices across theatre and performance today.

Newport Operatic Society: The First One Hundred Years, by David Kenny
Written by a former Society member, the book delves into archives to extract tales and titbits from the history of one of the UK’s best amateur operatic societies.

Shakespeare and Lost Plays: Reimagining Drama in Early Modern England, by David McInnis
This innovative study situates Shakespeare’s works alongside the hundreds of plays known to Shakespeare’s original audiences but lost to us. It reassesses the value of lost plays in relation to both the companies that originally performed them and to contemporary scholars of early modern drama. It revisits key moments in Shakespeare’s career and the development of his company and provides a richer, more accurate picture of dramatic activity than has been possible before.

Speculative Enterprise: Public Theaters and Financial Markets in London, 1688–1763, by Mattie Burkert
An academic study into the relationship between theatre and economic systems in the 18th century, including analysis of plays by Colley Cibber, Richard Steele and Susanna Centlivre.

Stage Door Days: Theatre in a Pandemic Year, by San Evan
This book provides insights into the work of a stage door keeper (SDK), focusing on the everyday experiences of working in theatre.

Stage Ghosts and Haunted Theatres, by Nick Bromley
A tour of some of the British Isles’ phantom-filled venues, offering a collection of untold supernatural experiences with some historic stories intertwined with details of the individual theatres where ghosts in many forms have been encountered.

Stirring Up Sheffield, by Colin and Tedd George
Written by the Crucible Theatre’s first artistic director Colin George, and his son Tedd, this is the story of a group of visionaries who came together to build a revolutionary thrust stage theatre in Sheffield. With a radical design that redefined the actor/audience relationship, it aroused fierce opposition but also galvanised a new generation of Britain’s actors, directors, designers and playwrights.

Stop Me If I’ve Told You This Before, by Peter Bourke
Stories from the world of theatre re-told by actor Peter Bourke who has had a long and successful career on stage and screen.

The Improbable Adventures of Miss Emily Soldene: Actress, Writer, and Rebel Victorian, by Helen Batten
A portrait of an almost forgotten star who trod the boards, travelled the globe and tore up the Victorian rule book.

The Performer’s Tale: The Nine Lives of Patience Collier, by Vanessa Morton
A biography of Patience Collier – an actress whose career spanned a golden age of performance from the 1930s to the 1980s – and an overview of theatre, film, TV and radio in Britain over half a century.

The Unknown Granville Barker: Letters to Helen & Other Texts 1915-1918, edited by Simon Shepherd
This book draws on the British Library’s archive of material on playwright, theatre director and Shakespeare scholar Harley Granville-Barker to provide a reassessment of his views, focusing on the correspondence between him and his second wife.

Theatre and Archival Memory: Irish Drama and Marginalised Histories 1951-1977, by Barry Houlihan
This is the first book to present a detailed and scholarly study of the key figures and productions which actively shaped the development of the modern Irish repertoire. It focuses on marginalised and previously unexplored performance histories, using the device of archival memory as a way for scholars and theatre-makers to study the development, influence and impact of marginalised Irish drama.

Towards a Civic Theatre, by Dan Hutton
Director Dan Hutton argues that a theatre which isn’t civic in outlook is not worth fighting for. Full of ideas and provocations from a range of theatre practitioners, and drawing on examples from inside and outside of the performing arts, his book makes the case for a new kind of theatre fit for purpose in an already tumultuous 21st century. It is a toolkit, a guide, an offer to audiences and a call to arms for artistic leaders of tomorrow.

We Travelled: Essays and Poems, by David Hare
Alongside his poetry, playwright David Hare writes on a range of subjects from the photographer Lee Miller to the Archbishop of Canterbury, from the actress Sarah Bernhardt to serial abuser Jimmy Savile, from a celebration of Mad Men to a diagnosis of the incoherence of Conservatism in the new century.

Will She Do?: Act One of a Life on Stage, by Eileen Atkins
The acclaimed actress and award-winning writer tells her story, from her early life to winning a Tony for The Killing of Sister George.

Work and Other Four Letter Words, by Joseph Millson
A behind-the-scenes, no-holds-barred account of the first decade of the stage and TV actor’s career, through the impossible slogs of auditions and the endless disappointments, the fragile successes, providing insights into what really makes an actor.