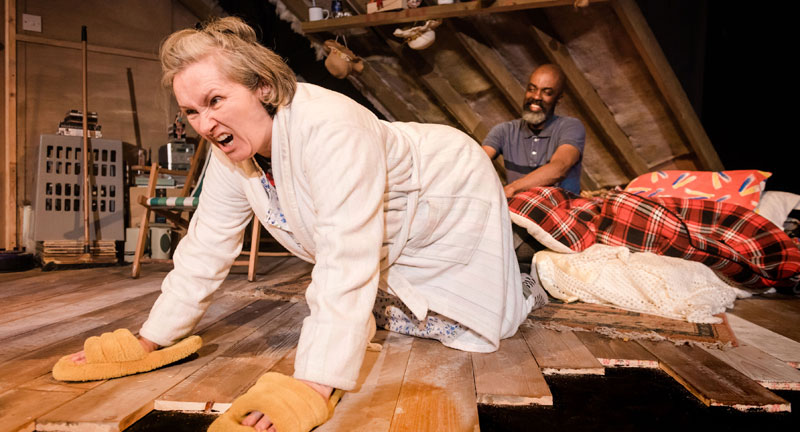 In Jane Eyre, Charlotte Brontë created the archetype of the mad woman hidden away in the attic. In Victoria Willing’s new play, Sad, Gloria is hiding in the attic and is mad as hell but, here, she takes centre stage. This new dark comedy explores what it means to be a woman in late middle age, still full of desires and hopes and fears rather than just a one-dimensional supporting character or stereotypical “boomer”.

Gloria, played with exuberance and bite by Debra Baker, has shut herself away in the attic of her home after her Christmas Day turkey killed her mother. Her daughter has moved to the other side of the world and she unexpectedly finds herself in the throes of an existential crisis. Her only visitors are her husband Graham, patiently bringing her food and emptying her toilet bucket, and her friend, Magda, played with clipped charm by Izabella Urbanowicz. Otherwise, Gloria cannot face the outside world – a sentiment that may resonate for anyone still recovering from Covid-19 lockdown isolation.

The wider action of the play suggests that Gloria, suffering from sadness and grief, may be right in escaping the world outside which is represented by Daniel, an immoral and thoroughly reprehensible neighbour and housing officer, played with comic sleaziness by Lucas Hare. Despite his contact with the other characters, this secondary plot never fully fits with Gloria’s story – but then this is a play about the “messiness” of life.

Alongside a strong performance by Kevin N Golding as Graham, Sad is also an exploration of the spice and volatility of a mature relationship between older people – again a topic not often depicted on stage. The drama may be messy but it is pulled together by Marie McCarthy’s polished direction, drawing plenty of humour out of a play about sadness. The messiness of Gloria’s attic hideaway has been designed with great attention to detail by Alys Whitehead, with highly effective lighting design by Alex Thomas. Surrounded by the detritus of her life, Gloria could be a character from a Beckett play, like Winnie in Happy Days, and Sad is at its strongest when Baker’s Gloria is alone on stage, raging against the world.