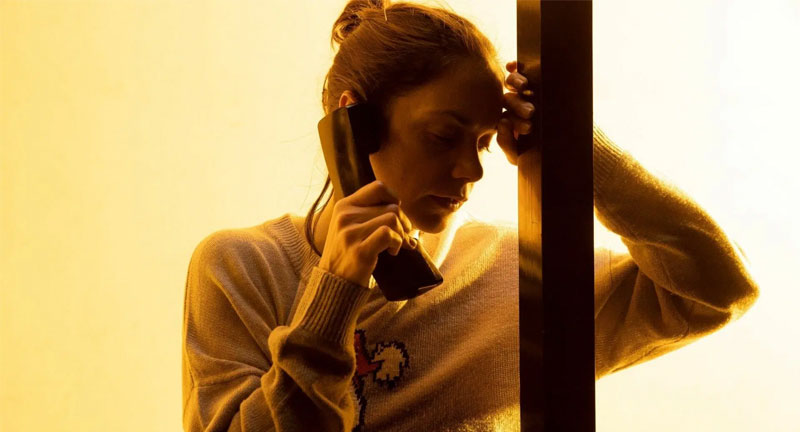 By no stretch could Jean Cocteau’s “monodrama”, The Human Voice, ever pass the Bechdel Test on the representation of women. A lone unnamed woman talks to her ex-lover on the phone after he has abandoned her, laughing, sobbing, pleading, flirting, driven by despair and desperation. Her whole world appears to have been built around this equally unnamed man who has left physically and mentally devastated. At no point does she speak to another woman or even talk about herself outside of the context of the failed relationship.

First performed in 1930, The Human Voice, or La Voix humaine, may feel outdated but, in Ruth Wilson’s impressive, bravura solo performance, the emotional collapse is raw and horrifying. She fleshes out this anonymous character into a believable and identifiable person with a beating, broken heart. Anyone who has been dumped would surely recognise the obsessive need for a phone call, just to hear your lover’s voice one more time.

Cocteau was a leading avant-garde figure of his day, linked to the Dadaist and Surrealist movements, but The Human Voice is more conventional than some of his other work such as his films. However, monologues were not as ubiquitous as they are now, and Cocteau challenges the audience by presenting a dialogue where only one side can be seen and heard. However, director Ivo van Hove takes a more abstract approach, as the woman’s phone conversation evolves into more of a one-sided psychological drama.

Van Hove’s adaptation, originally performed in Dutch in 2009 in Antwerp, updates Cocteau’s text to the present day, with a modern pop soundtrack (although the use of a shared “party” phone line is a little odd in 2022). The sleek minimalist design by Jan Versweyveld places Wilson in a white box, mostly separated from the audience by a glass screen. The team of sound designers and technicians ensure this is not a barrier to her voice but it adds to the play becoming almost a clinical study of a woman suffering a mental collapse. Wilson’s performance is mesmerising but ultimately there is a strange detachment that curbs engagement with her character’s agonising despair and sense of abandonment.

Running at the Harold Pinter Theatre in London until 9 April 2022.