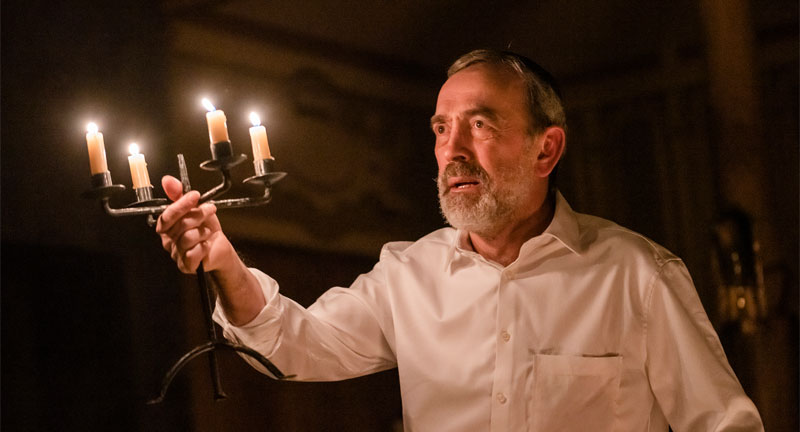 The Merchant of Venice is one of Shakespeare’s most problematic plays, to put it mildly. Its implicit antisemitism has long troubled theatre-makers, who seek to portray money-lender Shylock as more than a Jewish stereotype while at the same time struggling to tone down or mitigate the bigotry of the other characters. Abigail Graham’s production at the Sam Wanamaker Playhouse confronts the antisemitism head on and dials it up to its full horror, creating a bold and at times radical new take on the play.

Shylock has always been the play’s signature role in contrast to Antonio, the actual merchant of Venice, but in this new production, Shylock becomes its only shred of decency – even after he makes his bitter demand for a pound of Antonio’s flesh. In an exquisite performance, Adrian Schiller brings gentle dignity to the part – a loving father and hard-working businessman trying to do his job in the face of unwavering and shocking hatred from his clients. In this version, his story adds even darker shade to the interweaving “romantic comedy” plot, where Antonio’s friend, Bassanio, tries to win the hand of rich heiress Portia in marriage through a “Deal or No Deal”-style three-casket challenge.

As in other modern productions, Graham has adapted the suitors’ fable-like challenge into an actual game show, here with the prize of Portia dressed alluringly in a slinky gold-spangled dress on a podium. Romance is nowhere to be seen in this brutally capitalistic Christian world where lust for money and sex are the norm. Even the surface of the stage, designed by Sarah Beaton, is an epoxy carpet of two-pound coins.

From the opening scene, where the Venetian elite play drinking games whenever someone says “Jew”, this is a callous, decadent society shot through with prejudice. Antonio, played with smiling malevolence by Michael Gould, is the epitome of arrogance and entitlement, with hints of sleaze and corruption. Even Portia is no longer the classic heroine admirably pleading for mercy: she turns out to be just as bigoted, materialistic and cruel, taking delight in the torturous treatment of Shylock in the final court scene. Sophie Melville brilliantly portrays Portia’s hard edges while still bringing out what humour remains in the play.

The most radical departure for this production is the moving and unexpected ending – so stop reading if you are yet to see the show. One of the play’s numerous modern-day problems has been the clash between the lighter rom-com plot and the hate-driven destruction of Shylock. By the middle of the fourth of the play’s five acts, he has lost everything, punished by the elite of Venice. He then disappears from view and the narrative returns to the comic plot. It often jars, suggesting how little the characters care about what they have done to him, but Graham takes the radical step of axing the last two-and-a-half scenes. Instead of Shylock’s presence and identity being erased, his distraught daughter Jessica, normally left happily married and converted to Christianity, appears struck by regret about the betrayal of her father and her new friends’ attempts to negate her heritage. Played by Eleanor Wyld, she breaks into Jewish song, grabbing a loudhailer and drowning out the playful banter between Bassanio and Portia and ultimately erasing Shakespeare’s final scenes. Although the bigoted elite have won this battle, it signals that radical acts can face up to injustice and inequality, offering a sense of hope and a rallying cry at a time when antisemitism is on the rise.

Running at the Sam Wanamaker Playhouse at The Globe in London until 9 April 2022.

Pictured top: Adrian Schiller as Shylock in The Merchant of Venice at the Sam Wanamaker Playhouse. Photo: Tristram Kenton