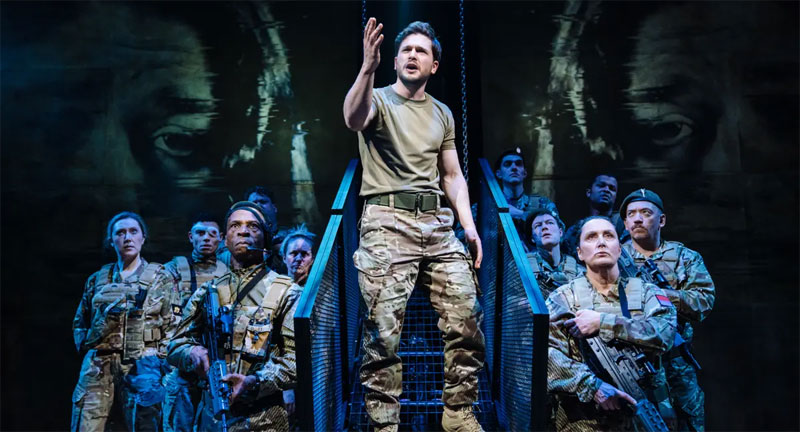 Events have rather overtaken Max Webster’s new production of Shakespeare’s war epic, Henry V, at the Donmar Warehouse. Nearly two weeks after the start of its run, Putin invaded Ukraine, bringing war back to Europe and creating a topical new context for the play. Retelling the events leading up to Britain’s defeat of France in the Battle of Agincourt in 1415, the 1599 drama presents an authoritarian leader who invades a neighbouring European country based on a dubious historical claim, bringing death and destruction. With Webster using modern military dress and sound and video effects, this morally ambivalent play is more unsettling than ever.

Until John Gielgud and Laurence Olivier helped to turn Henry V’s battle speeches into rousing jingoistic calls to arms during World War Two, the play was long seen as a more subversive exploration of the injustices of war. The king – whose father stole the throne from Richard II – uses arcane arguments about rights of succession to declare war on France, embarking on a messy conflict that breaks moral codes and leaves many thousands dead. Shakespeare shows us not just the historical figures waging war but also the ordinary people dragged into military service for a cause that some of them don’t understand or believe in.

It is the ordinary people who bring the show to life. Danny Kirrane stands out as Pistol, the boastful braggard who sees war as a chance to line his pocket, alongside strong performances by Melissa Johns as both Mistress Quickly and Williams, Claire-Louise Cordwell as Bardolph, David Judge as Nym, and Stephen Meo as Llewellyn and, briefly, Falstaff, catapulted in from the end of Henry IV Part 2. Llewellyn, traditionally played for laughs in his love of leaks, is violently passionate in his Welshness, suggesting it is not just English nationalism that poses a threat.

Previous productions of Henry V see the French, especially the prince, as a target for comedy and caricature but Webster transforms them into more noble, heroic characters, defending their country from a cynical invader. They also speak actual French, mostly using 19th-century writer François-Victor Hugo’s translation (with captions in English on screens), emphasising how imperial expansion has a cultural cost as well as a human one. This is further underlined by Millicent Wong, playing the Chorus and Boy, speaking some of her lines – and a few new ones – in Mandarin.

The complexities of the play are summed up in Henry himself, played by Kit Harington. He is an inspiring leader, able to turn on the charm, but at the same time a heartless bully – cruel and merciless like war itself. Harington brings charisma to the role but is less convincing as a ruthless, cold-blooded warmonger. Andrzej Goulding’s video design, Lee Curran’s lighting and Carolyn Downing’s sound bring the noise and spectacle of war to the stage, with an initially plain set designed by Fly Davis that evolves into a flaming English flag. Overshadowing it all is a quote projected onto the stage at the start, written by German Jewish philosopher Walter Benjamin, who killed himself rather than return to Nazi Germany: “There is no document of civilisation which is not at the same time a document of barbarism.” With this production, it is hard to ignore the barbaric beating heart not just of this play but of nationalism itself.

Running at the Donmar Warehouse in London until 9 April 2022.