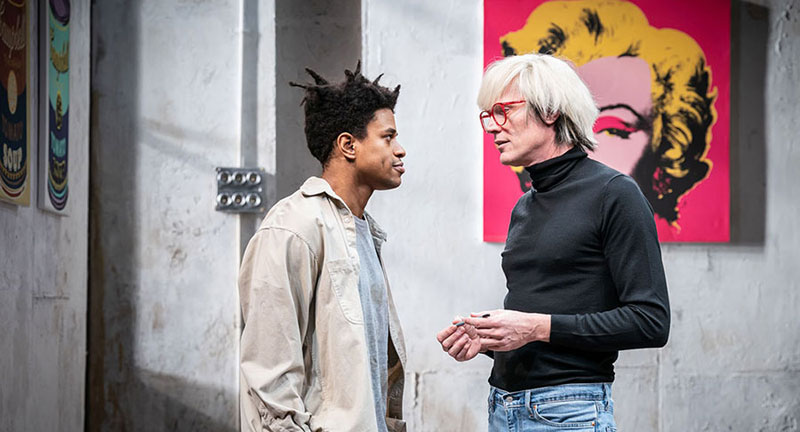 Andy Warhol was well established as one of the biggest stars of modern art when Jean-Michel Basquiat – 32 years his junior – came onto the scene in the early 1980s. Despite their differences in outlook, style and background, the pair formed an unlikely friendship and ended up collaborating on a series of paintings. This intriguing partnership has inspired writer Anthony McCarten to imagine how these two artists worked together, using it as a springboard for exploring the role of art and the artist and the creative process.

It is a perfectly structured play, full of sharp one-liners and articulate insights. It neatly sets up a string of oppositions, showing how polar opposites can crash together and create something new. Warhol is a buttoned-up germophobe who sees art as a cultural commentary dealing with surfaces while Basquiat is messy and chaotic, seeing art as an act of protest with spiritual meaning. But McCarten’s drama reveals them both to be dealing with pain and anger, finding inspiration from each other to create new work.

Sofia Barclay and Alec Newman provide excellent support as Basquiat’s girlfriend and the art dealer who brings the two artists together, but The Collaboration is essentially a two-hander driven by two powerful central performances. Directed by Kwame Kwei-Armah, it is full of lively exchanges that never slip into dry debate, with a simmering chemistry between the two artists. Paul Bettany is a waspish but surprisingly warm-hearted Warhol while Jeremy Pope brings angst and energy to the younger Basquiat. Anna Fleischle’s set conjures up the artists’ very different studios, serving as a canvas for an enthralling play that is light on drama but strong on character.

Running at the Young Vic Theatre in London to 2 April 2022.