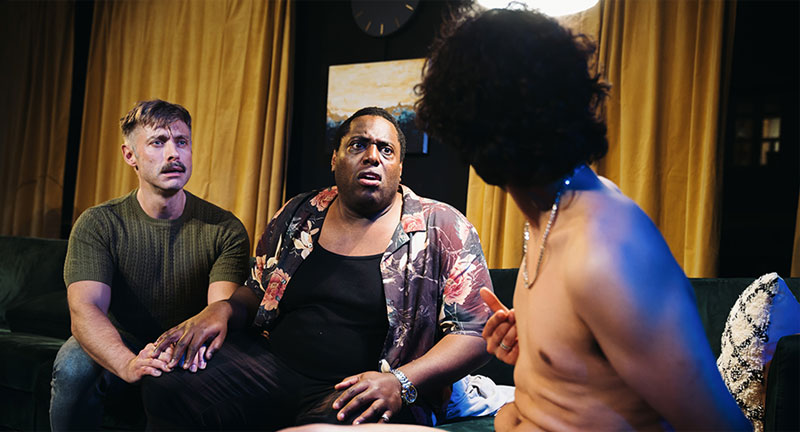 Michael and Phil have been together for 16 years, thriving in an open relationship while outwardly conforming to all the trappings of heteronormative suburbia: they have a stylishly decorated house, all the latest tech, and even a six-year-old son. In Tom Wright’s new play, Very Special Guest Star, we meet them as they prepare to embark on a threesome with a 20-year-old man, Quasim, who chatted them up in a bar. So far, it’s a scenario familiar from other “plays with gays”, exploring the shifting power dynamics in relationships and sex and the gay experience while fit men wander round in their underwear. But this comedy drama spins off in an unexpected direction, tackling race, family, parenthood and other issues that cannot be mentioned without giving away too much of the twisting plot.

Directed by Rikki Beadle-Blair, it is a taut 70-minute play, described in publicity as a “social thriller”. It gently builds an unsettling sense of menace as questions start to rise about the identity and motivations of the “very special guest star” that Phil and Michael have invited into their home. It goes to dark, troubling places, tackling social responsibility and liberal guilt, but always swings back to comedy, especially thanks to Edd Muruako’s perfectly pitched performance as the house-proud and somewhat neurotic Phil. Alan Turkington is also excellent as Michael, struggling to subdue his rising feelings of anxiety while coolly downing Manhattans. Jonny Khan completes the threesome as Quasim, switching from cocky confidence to heart-breaking vulnerability. Funny and entertaining, Very Special Guest Star does not shy away from delving into more problematic questions that give it a darker undertow.

Running at Omnibus Theatre in Clapham, London, to 12 December 2021.