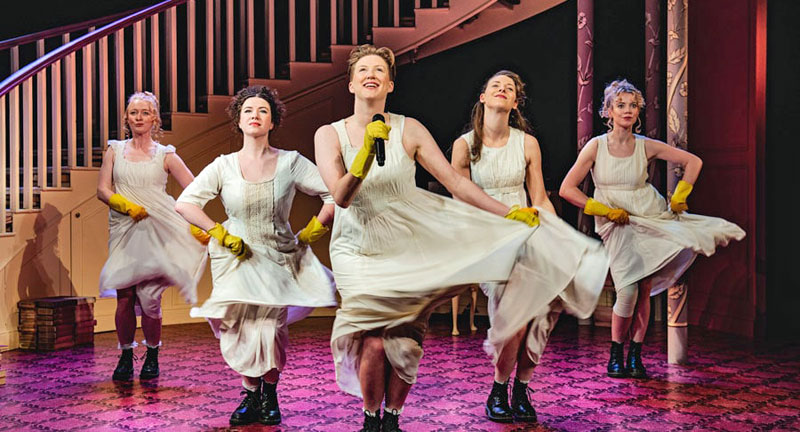 All preconceptions about Jane Austen’s stories are joyfully blown apart in Pride and Prejudice* (*sort of). This is no prim and posh drama but a profanity-filled comedy that celebrates the original novel while playfully exposing and picking apart Austen’s world. Originally staged at The Tron in Glasgow, it features a variety of accents from Scottish to Northern Irish, with a text ruggedly and hilariously translated into modern vernacular.

With an all-female cast, it is framed as five servants coming out from the shadows of Austen’s book to tell the story of the Bennet sisters and their pursuit of love. The impressive quintet of Tori Burgess, Christina Gordon, Hannah Jarrett-Scott, Isobel McArthur and Meghan Tyler take on all the roles, from Lizzie and Jane Bennet to the severe Mr Darcy and the nice-but-dim Mr Bingley. Directed by McArthur with Simon Harvey, they lucidly (and pretty accurately) present the story familiar from numerous film and TV adaptations, with Regency set and costumes designed by Ana Inés Jabares-Pita. Like a riotous karaoke party, modern pop songs have been ingeniously added into the mix, reminding us that there are some emotions that are as “universally acknowledged” now as they were in 1813.

You don’t need to know, or even like, Austen’s books to enjoy the show but there are a few in-jokes thrown in for Austen fans as well as satirical commentary on her novels and the patriarchal, unequal society of her time. It highlights how women were in vital need of a husband for economic reasons and how working-class stories – namely servants – were rarely represented in fiction. The story and characters are placed in a 21st-century context, touching on toxic masculinity and other topical issues. But it never becomes overly didactic, prioritising laughs and broad anarchic comedy with little letup in its well-oiled momentum.

Now playing at the Criterion Theatre in London to 13 February 2022.