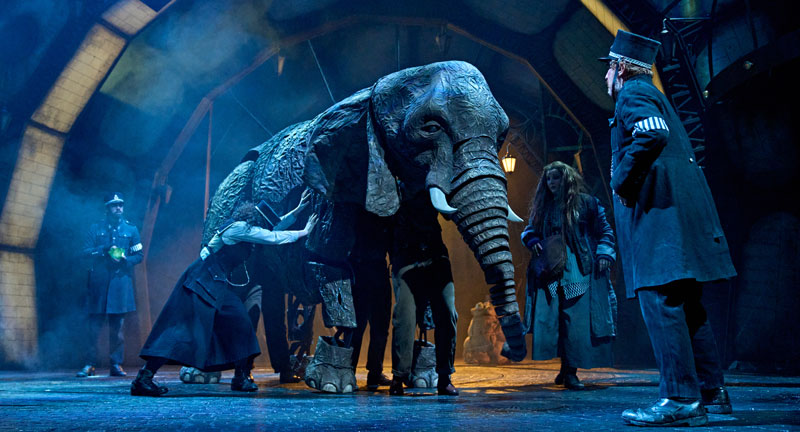 Mark Ludmon reports on how a life-size elephant is brought to the stage in the Royal Shakespeare Company’s new musical, The Magician’s Elephant

We need to talk about the elephant in the room. Through the magic of theatre, an African elephant has been brought to the stage in the Royal Shakespeare Company’s new musical, The Magician’s Elephant, which opens this month. Adapted by Nancy Harris and Marc Teitler from a children’s book by Kate DiCamillo, it is a story of a cold, bleak town where the inhabitants find new hope and togetherness after a magician accidentally transports the poor animal from its sub-Saharan habitat.

To bring this magnificent life-size creature to the stage in Stratford-upon-Avon, the show’s creators worked with puppetry designers Mervyn Millar and Tracy Waller, who have come up with something awe-inspiring and unforgettable. They set out to create more than just a generic elephant but one that has a character with personality, Millar explains. “The challenge is making the right elephant for the story, to fit this design world, to fit this character journey. The puppet is an object, a symbolic object, and it needs to be a character.”

However, the elephant is not supposed to be realistic or an imitation, he adds. “This is a show that includes illusion and magic, and there is a sort of illusion and magic in the puppetry side of it, but it is to do with this act of imagining that the audience do. The puppeteers are looking at videos and imagining elephants and thinking about elephant psychology but when we look at how to put that through the puppet, we are not trying to imitate it. We are trying to create something artificial that inspires you to imagine something. If we’ve got our work right, you imagine an elephant in that space and it’s your elephant, not my elephant, or Tracy’s elephant or the others in the room imagining it.”

Millar, who is the show’s puppetry director, says the design process for a puppet starts with anatomy, especially when creating an animal. “There’s a lot of drawing, a lot of looking at photographs and videos. We know from reading the book and reading the script, that this is not a giant jumbo adult elephant, it’s a youngish female African elephant who suddenly finds herself in a very cold, strange and barren and difficult place. We are looking at videos and studying behaviour and looking at how we can find the right anatomy and the right mechanisms for that character, looking at different possible textures. ”

The elephant’s basic construction features aluminium, plywood, bits of steel and bits of resin composite, placed in such a way to allow the puppeteers to get the best movement. The skin is a type of laminated plastic material like paper that has been heat-melted to create the folds, ridges and bubbles. “It’s not supposed to look exactly like elephant skin, not exactly like leather or paper but it is supposed to remind you of a lot of different things at the same time.” The trunk is made up of lots of sections – “stringing of the trunk is fabulously complicated” – but at the same time it was important to make sure the large head was soft and light enough for puppeteer Zoe Halliday to handle throughout the show.

The elephant is controlled by a team of three experienced, skilled puppeteers who also include Wela Mbusi and Suzanne Nixon. “Knowing that you’re working with very experienced puppeteers radically changes the way that you design a puppet,” Millar points out. “The puppet is a tool for performance, it’s like a musical instrument, it depends on the player what you’re going to get out of it. You can give them the same story and you’ll get a different result.” The puppeteers worked on the elephant’s character during rehearsals and had to be ready to perform live on stage without needing to speak to each other.

But bringing the elephant to life is not just down to the puppeteers themselves, Millar says. “The fourth and fifth puppeteer around the elephant are the other actors. We are working with the puppeteers but when the puppet sees another person, that connection needs to feel real. The actor has to imagine that if this was an elephant, you definitely wouldn’t stand any closer than this. It would be hot and leathery and scary and intimidating to be close to.”

For The Magician’s Elephant, the puppeteers have freedom at times to improvise. “Most of the grounding work is in terms of breathing, weight, making you feel that it is heavy, making it feel like it has thoughts, and the best way we found of doing that is to get puppeteers who can improvise,” Millar explains. “It’s a particularly interesting challenge in a musical context where everything is quite set and very tight to introduce an element that, for its success, has to have a kind of liveness that is slightly unpredictable. Part of the process of creating the show is releasing this slightly unpredictable object into the rehearsal room and seeing what the other actors do to it and see how brilliantly the musical director Tom Brady copes with the different lengths of time it might take to do this.”

The real test was the first time the elephant was revealed on stage when previews began last week ahead of press night this coming Thursday (28 October). “The moment that counts is when the audience see it, because it’s the audience that makes the character live,” Millar says.

The Magician’s Elephant runs at the Royal Shakespeare Theatre in Stratford-upon-Avon until 1 January 2022. Tickets are on sale now at rsc.org.uk.