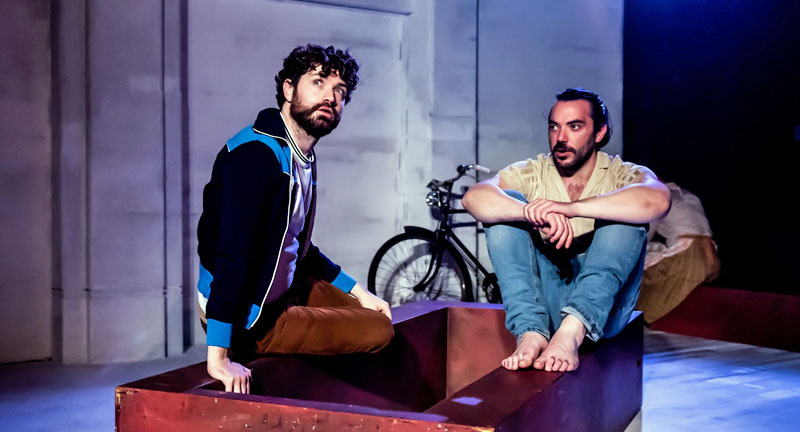 Story and character constantly shift and reshape in Peter Gill’s 1976 play, Small Change. Like fragments of memory and dreams, the narrative switches back and forth in time, replaying conversations, weaving lines together so that past and present become one. At times, it can be bewildering and confusing but Both Barrels Theatre’s new revival takes on the play’s challenges to present a compelling, intense drama of loss and broken hearts.

Mostly set in Cardiff in the 1950s and 1960s, it is told in flashback by a young man, Gerard, who is recalling his childhood from the perspective of present-day 1970s. It depicts the tough lives of working-class families after the war, focusing on Gerard’s mother, Mrs Harte, and her friend and next-door neighbour, Mrs Driscoll. The focus turns to Gerard’s close boyhood friendship with Mrs Driscoll’s son, Vincent, which underpins a brooding sense of anger that runs through the piece. There is also the anger at how industrial areas like Cardiff were allowed to decline and how communities were lost. Liam Bunster’s stark, abstract stage design recalls the cranes and girders of the city’s dwindling port and steel-making industry.

Gill’s writing has a poetic beauty which, due to its Welshness, recalls the lyricism of Dylan Thomas. Under director George Richmond-Scott, the revival reminds us why Gill has been compared to Harold Pinter, with tension and love left unspoken in the relationships between the characters. A repeated invitation to have a beer suggests complex eddies of feeling struggling to be expressed. With movement director Rachel Wise on board, much is conveyed through their bodies as well as their words.

The revival features a strong cast of four, including Sioned Jones and Tameka Mortimer as the mums and Toby Gordon as Vincent, but Andy Rush as Gerard stands out with an intense, mesmerising performance, switching seamlessly from a carefree cheeky kid bantering with his mother to a young man seething with anger and hurt. However, the subtlety of the direction means that anyone unfamiliar with the play and Gill’s work could find the final revelatory scene a bit of a surprise.

Running at Omnibus Theatre in Clapham in London to 2 October 2021.