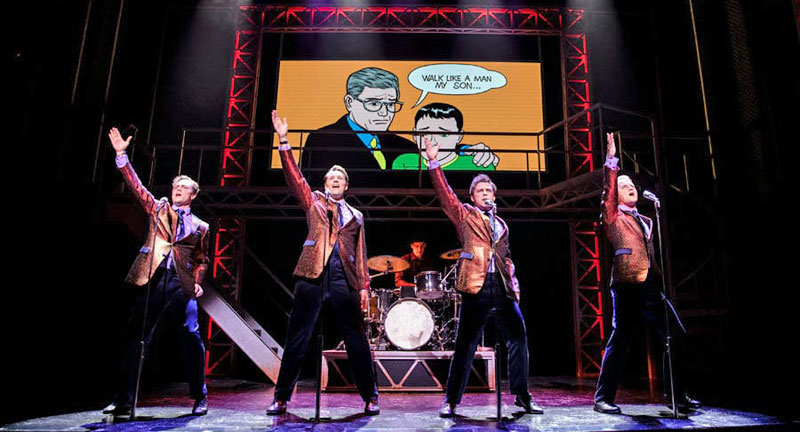 After a break due to Covid-19, award-winning musical Jersey Boys is back in London’s West End. After the Prince Edward Theatre and Piccadilly Theatre, it now has a new home at the new-look Trafalgar Theatre, making it a more intimate show that suits its confessional style.

It tells the story of 1960s rock ‘n’ roll group The Four Seasons, fronted by Frankie Valli. While other jukebox musicals such as On Your Feet give a sanitised version of their subjects, Jersey Boys is notable for giving a warts-and-all account, albeit endorsed by the surviving members of the group – and the Mafia. From the group’s early years through to their break-up, it is transparent about the boys’ law-breaking, spells in prison, involvement with gangsters, gambling, debts, infidelities and squabbles. It astutely charts the shifting dynamics within the quartet as original instigator Tommy DeVito finds his dominance undermined by Valli’s growing confidence and fame as well as by songwriter Bob Gaudio’s talent and success. At the same time, through all the ups and downs, it celebrates family, community friendship and loyalty.

Based on interviews with Valli, DeVito and Gaudio, writers Marshall Brickman and Rick Elice cleverly divide the narration between each of the Four Seasons, who take turns to give their own perspective on the group’s “rollercoaster” journey. Despite the darker elements, it is an uplifting story, buoyed up by well over 20 tracks from the group’s back catalogue, performed impeccably by the cast and five-strong orchestra led by musical director Katy Richardson.

The latest cast features four superb leads: Ben Joyce impressively achieves Valli’s smooth three-octave range throughout alongside Adam Bailey as Gaudio, Karl James Wilson as Nick Massi and Benjamin Yates as a cocky DeVito. With a mix of drama and music, it is a slick and compelling piece of theatre under director Des McAnuff and choreographer Sergio Trujillo, who created the original Broadway production in 2005. Jess Goldstein’s costumes and Klara Zieglerova’s set nostalgically summon up the ’60s, with dynamic lighting design by Howell Binkley.

But it is the music, in arrangements by Ron Melrose, that really bring the show to life and get the audience dancing in their seats. The most well-known hits are there, from “Sherry” and “ Walk Like a Man” to “Oh, What a Night”, “Bye Bye Baby” and the show-stopping “Can’t Take My Eyes Off You”. Thirteen years since it first opened in London, Jersey Boys is the musical booster that the West End needs.