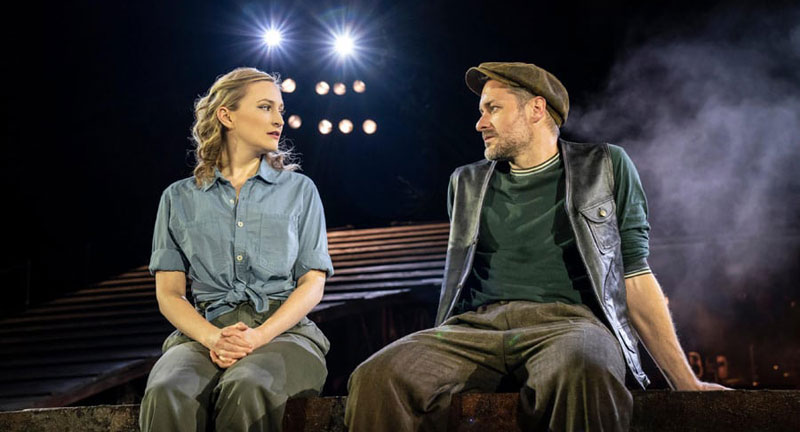 Memories of light, frothy productions of Rodgers & Hammerstein’s classic musical, Carousel, are swept away in Timothy Sheader’s new version at Regent’s Park Open Air Theatre. Instead of shying away from its problematic depiction of male violence, it confronts issues of domestic abuse and toxic masculinity.

This approach is not at odds with the original story. In the 1956 Hollywood film, heartthrob Gordon MacRae comes across as a sympathetic hero as fairground barker Billy Bigelow, wooing the young Julie Jordan before turning desperately to crime. At the Open Air Theatre, Declan Bennett is charismatic as Billy but he has a dangerous, more menacing edge. This harks back to the source material that Richard Rodgers and Oscar Hammerstein II drew on: a dark Hungarian play, Liliom, by Ferenc Molnar which tackled the bleakly cyclical nature of domestic violence with an anti-hero who is beyond redemption.

This new production focuses more than ever on Julie, played brilliantly by Carly Bawden. It sensitively explores how her love and loyalty to Billy leads her to make excuses for his violence in the face of a community that distrusts him. However, while this theme runs through the direction and choreography, the show has not been transformed into a single-issue drama. It remains a compelling show, peppered with humour, telling the story of a flawed relationship against the wider backdrop of a working-class fishing community.

Although the text still hints at it being in New England, the setting feels more abstract, with Tom Scutt’s stripped-back set gaining a more otherworldly feel, especially as night draws on and the stage is bathed in Aideen Malone’s lighting. The performers also retain their natural British accents, such as Bennett’s distinctive Coventry inflections and Sam Mackay’s cockney tones as Jigger Craigin. Welsh actor Christina Modestou is excellent as Julie’s friend, Carrie Pipperidge, while Joanna Riding is powerful as Julie’s protective cousin, Nettie Fowler.

With Riding’s Lancashire accent and the use of brass-band sounds in the music, there is a sense of northernness to this story of mill workers and fishermen but it is far more than this. Tom Deering’s inspired arrangements and orchestrations bring not just brass bands into Hammerstein’s score but other styles such as electric rock guitar, 1960s psychedelic prog rock and more contemporary neo-classical effects.

The result is a magnificent re-invention of both the score and the drama, with expressive choreography by Drew McOnie, not least in the stunning ballet sequence performed by Amie Hubert and William Atkinson. The songs gain meaning and clarity, from “If I Loved You” and “What’s the Use of Wond’rin’?” through to the stirring “You’ll Never Walk Alone”. This is a fresh, exciting production that impresses with its originality but still provides delight for Rodgers & Hammerstein fans.