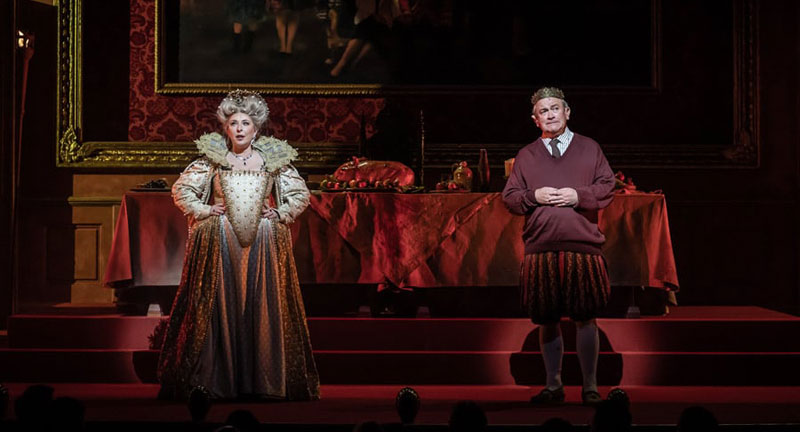 We are rather starved of satire in Britain these days. Spitting Image is back but languishes on BritBox rather than primetime TV while The Mash Report was cancelled by the BBC before being adopted by Dave. However, for the past five years, Channel 4 has given us The Windsors, a gloriously silly and outrageous satire on the royal family, filled with caricatures as over the top as Spitting Image but performed by some of the UK’s best comic talents. Its writers Bert Tyler-Moore and the late George Jeffrie have turned it into a stage show and, while most of the TV series’ cast were unavailable, it assembles a mix of old and new actors for an experience just as daft but with extra topicality and more risqué jokes.

The TV comedy regularly sees the royals facing an existential crisis but it is taken to the next level in The Windsors: Endgame. As on TV, Camilla is a Machiavellian plotter, working behind the scenes to gain real power for her and her husband. After the abdication of Elizabeth II, she resolves to restore an absolute monarchy under Charles III, taking Britain back to a Tudor-style totalitarian kingship. Only Princes William and Harry, and their wives Kate and Meghan, are left to save the country. Although it is a self-contained story, it all takes place in The Windsors “universe”, where Kate is from a “Romany gypsy” background, Meghan is a new-age therapy fanatic and royal accents are comically extreme.

Harry Enfield, Tom Durant Pritchard and Matthew Cottle are brilliantly funny reprising their TV roles as Charles, Harry and Edward, with the latter breaking the fourth wall as a kind of MC who also doubles up in many of the minor roles. Tracy-Ann Oberman steps in magnificently as Camilla – a cross between Lady Macbeth and a pantomime villain – while Ciarán Owens, Kara Tointon and Joelle Dyson are excellent as Wills, Kate and Meghan.

Jenny Rainsford and Eliza Butterworth join the cast to build on the TV’s show’s inspired double act of princesses Beatrice and Eugenie as two naive, out-of-touch aristocrats. Their part in the narrative is to save their father Andrew’s reputation as he faces the ongoing allegations over Jeffrey Epstein – a cue for some of the more tasteless, topical and risqué jokes.

Directed by Michael Fentiman, the show has the feel of a light-hearted varsity revue, with the addition of occasional comic songs to music composed by Felix Hogan. With elements of panto, music hall and Shakespeare thrown in, it is a quintessentially English mix of styles with a pleasingly old-fashioned feel. Most importantly, it is an hilarious and (mostly) affectionate satire on a peculiar and peculiarly British institution.