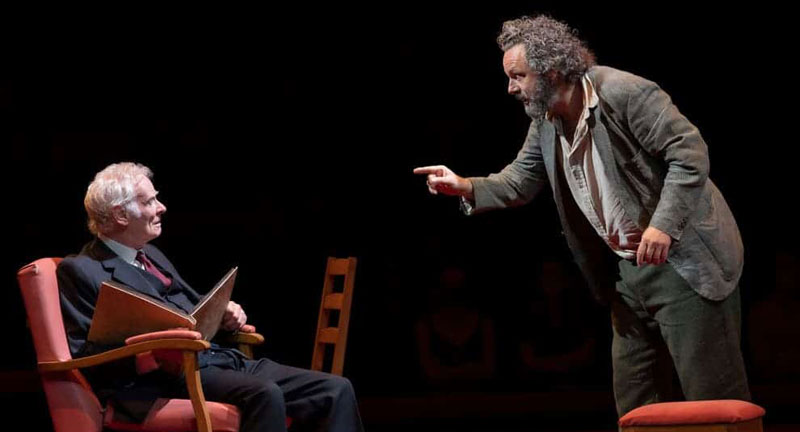 The characters and stories of the Welsh village of Llareggub are wonderfully brought to life on stage in the National Theatre’s stage adaptation of Dylan Thomas’ Under Milk Wood. Originally written as an audio drama, it has been reinvented as a memory play, with strong performances by a mostly older cast.

Additional dramaturgy by Siân Owen, frames Thomas’ story within the setting of a care home for the elderly, as middle-aged Owain Jenkins (Michael Sheen) visits his elderly father, Richard Jenkins, whose memories and identity have been consumed by dementia – a touching performance by Karl Johnson. As Owain starts to remind his silent dad of their former home in Llareggub, the care home staff and residents are transformed into the characters of Thomas’ original poetic play.

It is a clever idea but detracts from the core storytelling which is when this production soars. Sheen’s delivery is spell-binding as the descriptions of a day in the life of Llareggub burst into life. Siân Phillips is phenomenal in roles including Polly Garter longing for her dead lover, while other casting see Susan Brown as the nagging Mrs Ogmore-Pritchard, Michael Elwyn as music-obsessed Organ Morgan, and Anthony O’Donnell as land-locked seafarer Captain Cat.

Directed by Lyndsey Turner with impressive movement direction by Imogen Knight, the show boasts many fine performances, vividly imagined on Merle Hensel’s flexibly minimalist set with dynamic lighting design by Tim Lutkin. At its best, Thomas’ poetry soars as the storytelling shifts like memory in Sheen’s proficient hands, throwing new light on the text and bringing out its beauty and achingly nostalgic poignancy.