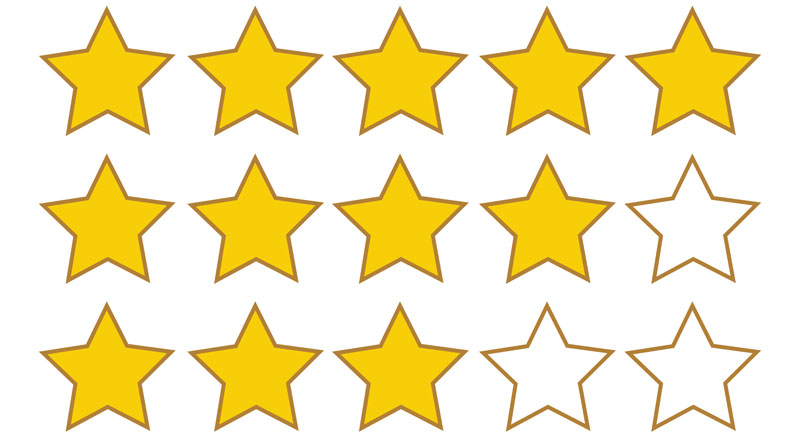 In the first of a series of articles, I look at the history of star ratings and how they came to be adopted for theatre criticism. This is based on the first section of my dissertation on the star rating system in theatre for an MA in Theatre Criticism and Dramaturgy at Royal Central School of Speech and Drama in 2019.

Michelangelo’s majestic ceiling of the Sistine Chapel in the Vatican City is considered to be one of the world’s greatest works of art. A quarter of Britons ranked it number one in a survey by research group YouGov, well ahead of Da Vinci’s Mona Lisa and The Last Supper.1  However, it rates only 4.5 out of five stars on holiday website TripAdvisor, based on visitors’ overall experience as well as artistic achievement.2  Marcel Proust’s In Search of Lost Time series regularly tops lists of the world’s great literature and has an average rating of four out of five on Amazon.3  “I was irritated and, frankly, bored witless,” comments “Sid Nuncius”, one of Amazon’s “top 100 reviewers” who scored the first volume, Swann’s Way, one out of five stars. With the rise of the internet, everyone’s a critic now, and the star rating system has become part of this democratisation.

Star ratings are ubiquitous, reducing experiences of artistic works to the same evaluative system as a hotel stay or brunch. For my MA in Theatre Criticism and Dramaturgy at Royal Central School of Speech and Drama, I examined how ratings have become embedded in British theatre criticism, tracing their lineage within the development of critical writing. With a focus on Edinburgh Festival Fringe, I argued that star ratings reflected how theatre criticism had developed a role of “consumer guidance” and were part of a wider trend for all kinds of objects from films to fridges to be commodified and rated in a neoliberal capitalist society. After carrying out an audience survey and drawing on interviews and other articles, I concluded that, despite hostility from critics and artists towards what they see as a reductive and ineffective system, the complex economic relationships within the theatre sector meant that, as long as late capitalism maintained its hold, star ratings were here to stay. I will expand on these topics in follow-up articles.

The urge to rank and rate is part of an innate human desire to categorise the world around us which arises out of the development of language.4  The rating of artwork and experiences can be dated back to 1820 and Mariana Starke’s guidebook to the sights of continental Europe where, as shown below, she used exclamation marks to highlight “objects best worth notice in the respective galleries of sculpture and painting”, rating them “according to their merit”.5 She marks on a scale up to six although she provides no further details about her criteria. Examples of artworks receiving six exclamation marks include the “transcendent and inimitable” Borghese Gladiator statue by Agasias of Ephesus at the Louvre Museum in Paris;6 she awards only three to Michelangelo’s “wonderfully fine” ceiling in the Sistine Chapel.7

From 1844, other travel guides such as Baedeker adopted a similar system using stars for points of interest and then hotels.8  Ratings decided by editors and experts subsequently became commonplace for hotels in the twentieth century. Tyre company Michelin introduced a single star rating in its guide to restaurants in France in 1926, expanding to the current three-star rating in its 1931 edition, ahead of its entry into the British market in 1974.9  The first star ratings in restaurant reviews came in 1963, introduced at the New York Times by food editor Craig Claiborne, initially with a maximum of three stars, rising to four the following year10  – a practice that has spread to Britain. The growing popularity of this mechanism for communicating quality was adopted by New Labour for measuring public services, such as a zero-to-three scale of stars for the National Health Service in 2001 although these proved to be unreliable indicators and were scrapped and replaced by more complex metrics.11

In terms of star ratings for artwork, early examples include Edward O’Brien’s The Best American Short Stories, published annually from 1915, using a rating system of zero to three stars based on “literary prominence”.12  The earliest record of films being graded is critic Irene Thirer in the New York Daily News on 31 July 1928, using a scale of zero to three stars, where three meant “excellent” and zero meant “the picture’s right bad”.13  While the Daily News continued the practice, ratings did not become more common until the 1950s when French film magazine Cahiers du cinéma began to poll critics, distilling their judgment down to a scale of one to five stars, “with a bullet reserved for movies that the magazine didn’t like”.14  Critics Gene Siskel and Roger Ebert introduced the most famous rating scale for films in the US in the 1970s on their PBS TV show Sneak Previews, ranging from two thumbs down to two thumbs up.15  However, stars have become the dominant symbol, predominantly from zero or one up to five, and not just for films but for all kinds of artworks, consumer products and experiences, from hotels and restaurants to music and books. The dominance of the five-star system has been strengthened since the arrival of the internet, used by consumers on websites and apps such as Amazon, TripAdvisor, hotel-booking sites and movie database IMDb. From consumer products and leisure experiences to public services, star ratings have become an instantly recognisable symbol in British society.

In contrast to film, the introduction of star ratings in theatre criticism was relatively late. The catalyst was the growth of the Edinburgh Festival Fringe which, by 1996, had grown so large that The Scotsman newspaper introduced a rating system of one to five stars to help readers navigate the programme of around 1,500 shows.16  Another pioneer was the UK’s first theatre website, WhatsOnStage.com, where a five-star system has been used since its first review in 1997 for Ben Elton’s Popcorn in London’s West End.17  Other newspapers such as The Guardian followed suit in the late 1990s, both for the Edinburgh festivals and nationally, although some including The Observer resisted until more recently.18  Now, a star rating system – either from zero to five or from one to five – is used with critics’ reviews by every British national newspaper, entertainment media such as Time Out and nearly every theatre website. One of the last to succumb was The Stage which, despite objections from critics, introduced a star system for reviews in 2014 “in response to readers’ demands”19 while Sunday newspaper The Observer uses them online but not in print.20  The few exceptions in 2020 include online theatre magazine Exeunt, which specialises in more analytical, long-form reviews, and critic Lyn Gardner on theatre app Stagedoor.21

Theatre has also been a late adopter when it comes to consumers being able to share their own star ratings. Early attempts by the Edinburgh Festival Fringe Society to introduce “customer ratings” by mobile phone text messages proved to be open to abuse22 and consumers can now submit only written reviews without stars via the Fringe’s website and app.23  Stagedoor, launched in 2017, is the only theatre website and app to allow anyone to submit a star rating, described as “pioneering”,24 although it has no safeguards to ensure the user has seen the show. Theatre can be awarded star ratings on TripAdvisor but these are long-running shows such as West End musical The Lion King, with emphasis on the overall visitor experience.25  The result is that consumer ratings have not had as much impact on British theatre as in film, for instance, and, while it is worth further study, I focused my research on theatre criticism. In my second article, I will place star ratings within the evolution of the wider practice of criticism from its earliest expressions to the present day.

This is an edited extract from my dissertation. Please note that neither the dissertation nor the articles have been “peer-reviewed”. If you have any comments, please email me at markludmon@hotmail.com.

Top graphic by Adam448 via Pixabay