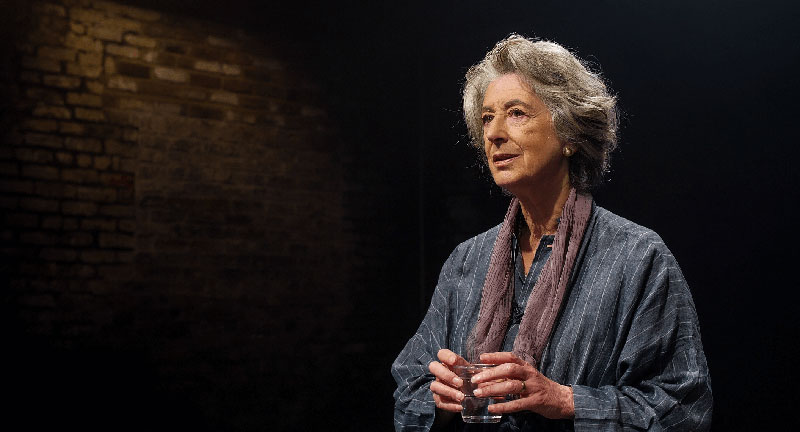 Maureen Lipman gives the performance of a lifetime in the online revival of Martin Sherman’s play, Rose. Best known for comedy and roles like Evelyn Plummer in Coronation Street, she is heartbreaking and compelling as a Jewish woman who has witnessed the horrors of antisemitism and experienced the dislocation of being a refugee without a home.

Originally performed by Olympia Dukakis at London’s National Theatre in 1999, the play is set on the cusp of the new millennium, against the backdrop of conflict between Israelis and Palestinians. Aged 80, Rose takes us from her childhood with her family in a tiny shtetl in Ukraine under threat of the anti-Jewish pogroms. After fleeing to Warsaw in the run-up to World War Two, she sees the Nazis’ extermination of the Jews at first hand in the destruction of the Warsaw Ghetto before finding herself a displaced person, tossed around Europe before ending up in the US.

The play charts the emergence of the state of Israel through to the present day, provocatively exploring it from the perspective of a woman who is agnostic but still clings to her Jewish culture. The creation of the “Promised Land” in Israel merely provides Rose with one more place where she feels she does not belong.

It is also a play about memory. Rose vividly describes her experiences, from Ukraine and Warsaw through to sailing to Palestine with other Jewish people in 1947 on the SS Exodus, but she often wonders how much her memories have been shaped by media, from news reels to Fiddler on the Roof. Lipman infuses her performance with perfectly pitched humour, balancing the horror and heartache and what turns out to be a simmering anger and grief in the play’s deeply moving conclusion.

In the latter half, the play becomes a meditation on the Israeli-Palestinian conflict in the 1990s and the modern state of Israel but, intelligently directed by Scott Le Crass for Hope Mill Theatre online, it stops short of being polemical, tempered by Rose’s recurring use of the rhetorical device, “On the other hand….”. It is chiefly a powerful portrait of one woman’s journey through history as a refugee, learning to adapt and change to survive, but how that act of survival can come at the cost of losing a sense of home and identity.