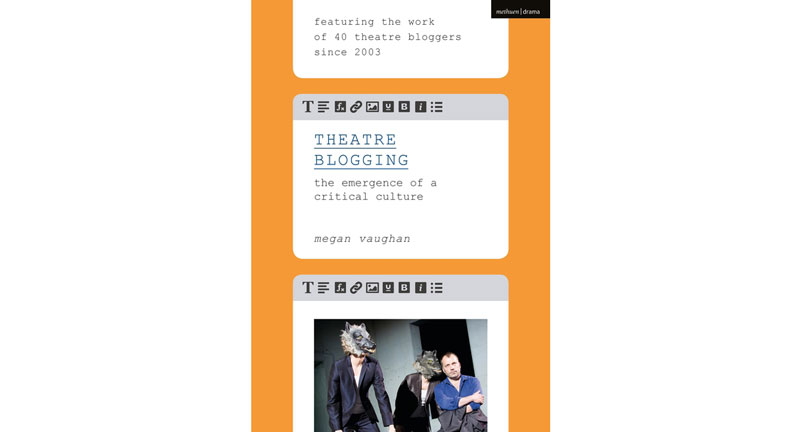 With her blog Synonyms for Churlish, Megan Vaughan was part of a cohort of bloggers who have been shaking up the world of theatre over the past 15 years. One of her claims to fame is a review using emojis in the style of a WhatsApp chat, which was in line with bloggers’ efforts to challenge the traditional forms and style of criticism in the mainstream media. She applies some of this rebellious spirit to academic writing in her new book, Theatre Blogging: The Emergence of a Critical Culture. It is underpinned by rigorous research and an in-depth understanding of her topic but she introduces revealing personal insights and touches of humour as well as the odd emoji.

Theatre blogging was addressed by some of the writers in Duška Radosavljević’s 2016 collection, Theatre Criticism: Changing Landscapes, but this is the first book dedicated to it, focusing on the UK, USA and Australia. Vaughan looks back at how “weblogs” and “blog rolls” emerged about 15 years ago as a relatively more democratic and accessible medium for talking about theatre in contrast to newspapers where most of the critics were still white male middle-class Oxbridge graduates. While Vaughan’s book celebrates the greater diversity of voices through theatre blogging, she notes that not a lot has changed in the mainstream, where arts criticism has been shrinking, and that the precarious, unmonetised nature of blogging means it still requires the luxury of spare time and an alternative source of income – something that means many bloggers are still from traditionally privileged racial and socio-economic backgrounds. However, drawing on her own experience, Vaughan explores how monetising through advertising or Patreon subscription risks changing a blog’s identity and credibility. A chapter featuring highlights of a WhatsApp conversation between bloggers opens up many of the topics covered by Vaughan’s research, revealing more about the day-to-day experience of blogging as well as highlighting the sense of community that binds them together.

Her book charts some of the key moments in the emergence of the theatre blogosphere, including responses to the cancellation of My Name Is Rachel Corrie in 2006 and the differing views on Martin Crimp’s Attempts on her Life in 2007, Andrew Lloyd Webber’s Love Never Dies in 2010, Simon Stephens and Sebastian Nübling’s Three Kingdoms in 2012 and Howard Barker’s In the Depths of Dead Love in 2017 – usefully illustrated by the reproduction of key online articles. The book not only highlights what makes blogging different to traditional forms of criticism but also identifies the value of blogging within the landscape of theatre, where it opens up the discourse beyond just news, interviews and overnight reviews. With space for longer articles and multiple perspectives, blogs have been dubbed “outsider criticism” but now an important part of discussions around theatre, “to implore the theatre industry to, please, just do better”.

What has especially irritated traditionalists is bloggers writing about the more emotional and visceral experience of theatre. Their reviews are transparently personal and subjective, exposing the myth of objective evaluation that continues to shroud mainstream criticism. This explicit subjectivity has led to attacks that it is inferior but, without seeing it as a binary struggle between old and new, Vaughan’s book suggests that these kinds of different approaches are essential for criticism to survive. While the book’s title says it is about theatre blogging, it is an important exploration of the future of arts criticism as a whole (although she makes little mention of the consumerist five-star rating system forced on mainstream critics and valiantly resisted by most bloggers).

Two-thirds of the book are a well-curated anthology of online posts, putting into print articles that are buried on dormant blogs or completely lost to the digital void because of loss of data or hosting problems. These articles make this not just a book about the future of criticism but also about theatre practice through several illuminating posts about theatre-making by the likes of Ava Wong Davies, David Eldridge, Jill Dolan, Chris Goode, Andrew Haydon, Daniel Bye, Vinay Patel and Maddy Costa. They throw light on debates such as the place of texts in productions, representations of race, the structure of the theatre industry, and embedded criticism where a “critic” works within a production team. These articles make this a fascinating read for theatre practitioners as well as anyone interested in the future of criticism. With its insights and passion, the book is an inspiring call for new forms and new voices. 😍