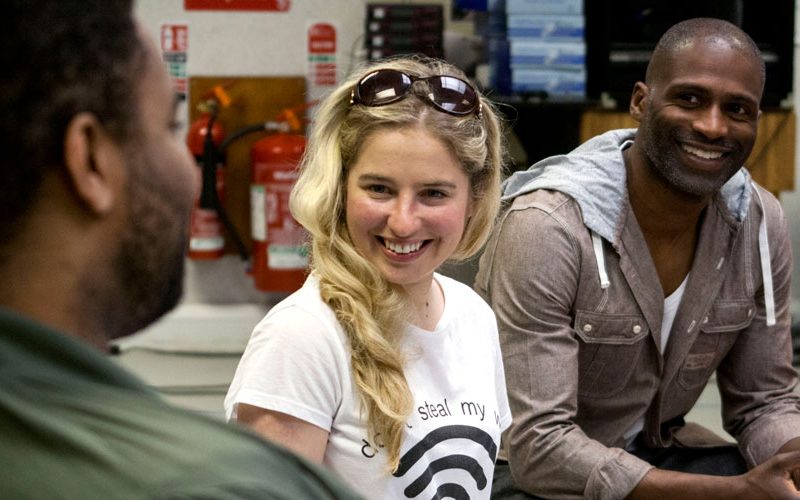 Mark Ludmon speaks to Elizabeth Newman about Pitlochry Festival Theatre’s efforts to reach audiences during shutdown including the premiere of David Greig’s new play, Adventures With the Painted People

In Willy Russell’s Educating Rita, new student Rita is asked by her tutor how to overcome the difficulties of staging Ibsen’s Peer Gynt. Her famous response is simply: “Do it on the radio.” Right now, the difficulties of staging any play are insurmountable because of the coronavirus but, thanks to BBC Arts’ online Culture in Quarantine programming, Rita’s solution is proving to be the best alternative right now for at least one postponed show.

Alongside new commissions, documentaries and streaming past productions, BBC Arts’ schedule will include the world premiere of David Greig’s new play Adventures with the Painted People on Radio 3 on 7 June at 7.30pm. The show – his first new original work in six years – was one of the highlights of the 2020 season at Pitlochry Festival Theatre in Highland Perthshire, running in repertoire from July until September. The stage premiere has now been postponed to 2021 along with new productions of the musical Gypsy, Tennessee Williams’ Cat on a Hot Tin Roof, Noël Coward’s Private Lives and Amanda Whittington’s Kiss Me Quickstep and a new adaptation of Sense and Sensibility by Glasgow-based playwright Frances Poet. So the theatre’s artistic director, Elizabeth Newman, was excited when BBC Arts contacted her about bringing Greig’s much-anticipated new play to audiences sooner rather than later.

As originally planned for the stage production, Newman is directing the radio play herself, in collaboration with audio specialist Naked Productions, and it will feature the two actors who were lined up to perform it in Pitlochry in July: Olivier Huband and Kirsty Stuart. Set around Pitlochry and the River Tay in 85AD, it follows a Pictish woman, Eithne, and Lucius, a Roman architect from Tunis, whose paths cross after a military skirmish. “It follows their relationship and what it means to be a To man and what it means to be a Pict,” Newman explains. “It’s an allegory for where we all find ourselves as regards to trying to navigate identity in a really complex situation.” Greig has described it as “a story of people meeting in extraordinary times, of borders being crossed, of cultures changing, and of love”.

Adventures with the Painted People is just one example of how Pitlochry Festival Theatre is continuing to connect with audiences during shutdown. The show was developed as part of the theatre’s three-year artistic project, Shades of Tay, which was launched last year and is producing other work going online from the end of May. The 25 pieces of new writing, ranging from audio dramas to short films and podcasts, have been commissioned from a diverse range of writers, predominantly Scottish, such as Timberlake Wertenbaker, Jo Clifford, Frances Poet, Stephen Greenhorn, Hannah Khalil, Daniel Bye and May Sumbwanyambe. They will be performed by the ensemble of actors lined up for Pitlochry’s summer season and will form part of a live festival after the theatre reopens. Since March, the theatre has also made a wider programme of entertainment for all ages available online under the banner of #PFTLightHopeJoy, with something new daily at 10am, 1pm and 6pm. With live theatre performances unable to go ahead, the online activity is widening audiences for the Perthshire theatre across the UK. “We want to use this opportunity to reach even more people and make new friends,” Newman says. “We hope hearing Adventures with the Painted People on BBC Radio 3 will encourage them to return to Pitlochry Festival Theatre or visit us for the first time when we can reopen.”

It all builds on Newman’s efforts to increase the profile of Pitlochry Festival Theatre after she took over two years ago. She had been at Bolton’s Octagon Theatre since 2008, initially as an associate director and then artistic director for three years. Since arriving in Pitlochry, she has worked with the team there to not only reach more people in the surrounding region but extend further across Scotland and beyond. The theatre dates back to a tent-like structure created in 1951 by amateur dramatics producer John Stewart, inspired by Regent’s Park Open Air Theatre, followed in 1981 by today’s permanent building beside the River Tummel, a tributary of the River Tay. But, in its continuing impact after shutdown, it is clear that it is more than just a building.

Collaboration has been an important part of Newman’s strategy, such as a partnership with Edinburgh’s Royal Lyceum Theatre to co-produce Neil Simon’s romantic comedy, Barefoot in the Park, from March this year. This production, directed by Newman and starring Olivier Huband with Jessica Hardwick, Clare Grogan and Hamish Clark, was halted after only five performances at Pitlochry and unable to transfer to Edinburgh in April. Since the coronavirus hit, the theatre has also collaborated with theatre company Paines Plough to produce work from writers Jo Clifford, Stef Smith, Corinne Salisbury and Karine Polwart as part of Come To Where I Am – “stories and plays from the places that shape us” – which goes online via YouTube this week and will later be staged once theatres are reopened. These collaborations reflect Newman’s ambition to create work that goes further afield. “It’s all very much about how we are connected to the theatre landscape and therefore able to connect with more people in general.”

She has also spearheaded more diversity in the theatre’s programming, including more works by women, and increased accessibility. “There is more support for people who haven’t been able to come to the theatre before. It is very much about being a theatre for everyone but also a theatre for a lifetime – the idea that you can come to Pitlochry Festival Theatre at any age and be able to find something for you.”

Despite the theatre’s physical shutdown, they hope to continue with improvements to the site as part of the Vision 2021 plan, originally announced six years ago by the theatre’s board and then artistic director John Durnin. This will include the creation of a studio theatre as a second performance space. However, with 85% of funding coming from tickets and dining, Newman and executive director Kris Bryce have been raising money since shutdown, including a JustGiving.com appeal to help them keep going. So this hiatus for live theatre is turning out to be a busy time for Newman: “We are continuing to make work and prepare for 2021.”

Originally published on 18 May 2020 on BritishTheatre.com.