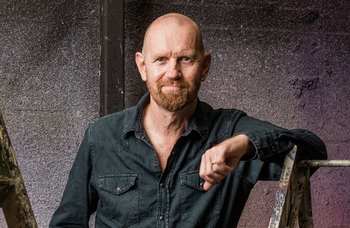 The UK premiere of Broadway hit musical Something Rotten! is among a wave of new productions announced today by Sean Foley for his first full season as artistic director of Birmingham Rep.

It will also feature a new musical based on Patrick McCabe’s award-winning Irish novel Breakfast on Pluto, starring Fra Fee, and a new play, Calmer, by Lolita Chakrabarti, directed by actor Adrian Lester.

They join other new shows and touring productions running at The Rep from September onwards in a programme put together by Foley after he came on board last summer. It encompasses both the 825-seater house, the 300-seater Studio and the 150-seater The Door.

Aiming to offer “artistically ambitious popular theatre”, Foley said that the theatre’s three spaces provided an opportunity to combine popular comedies, musicals and classic dramas with new writing, bringing in emerging early-career artists and smaller touring shows. “What I’m trying to do is to put on shows that people will enjoy and come to see, try to do theatre that connects with people.”

He also said the season reflected his ambitions for The Rep to celebrate artists from the region, both those living there now and those who have moved away such as Lester who was born in Birmingham.

Pointing out that Birmingham has the most diverse population of any city in the UK, he said: “It is important that the theatre that sits in the centre of Birmingham, and the only producing theatre in Birmingham, has work on its stages that is representative of every part of that city. The Rep has been a leader in diversity and representation, and that is something we will be doing better.”

Foley himself will be directing Something Rotten!, which was nominated for 10 Tony Awards after it opened on Broadway in 2015 under director Casey Nicholaw. Set in 1595, the show follows brothers Nick and Nigel Bottom who are struggling to compete with their contemporary Shakespeare and invent a new theatrical form, the musical. It features music and lyrics by Wayne and Karey Kirkpatrick and a book by Karey Kirkpatrick and British writer John O’Farrell.

He described this as a “new production” with “a little bit of a rewrite” for a new audience in the UK, not least to make Nick and Nigel a pair of Brummies, but he insisted there would be “no throwing out the baby with the bath water” to make it significantly different. “It’s a spectacularly fun show.” He added that he hoped it would especially resonate with West Midlands audiences as Shakespeare and the Royal Shakespeare Company come from the region. It will run from 8 to 31 October 2020.

Breakfast on Pluto, adapted by Bob Kelly with music by Duke Special, is a co-production with Landmark Productions and Galway International Festival, running in the main house at The Rep from 3 to 26 September. It is being produced in association with London’s Donmar Warehouse where it will also have a short run.

The show is an uplifting coming-of-age story set against the backdrop of the Troubles, with Fee playing Patrick/Pussy Braden who leaves rural Ireland for 1970s London in search of a long-lost mother and a technicolour new life. Directed by Des Kennedy, it also features Niamh Perry, David Ganly, Kate Gilmore and Rickie O’Neill. As the narrative explores gender identity, the creative team has brought in actress Rebecca Root, who is a trans woman, as a consultant.

Chakrabarti’s new play, Calmer, will receive its world premiere in The Studio from 16 to 31 October in a co-production with Belgrade Theatre Coventry, with Lester making his directorial debut. It is described as a darkly funny, raw and touching examination of love, guilt and family. It follows three generations of women: an eminent psychiatrist whose life is starting to unravel, her mother who is a self-help guru and her 18-year-old daughter who is going through her own crisis.

Other new shows include Bright Places developed by Birmingham-based writer Rachael Mainwaring through The Rep’s artist development scheme, Foundry. Exploring the impact of multiple sclerosis on the lives of three women, it will have its world premiere at The Door from 23 September to 3 October.

Two seasonal favourites created by the theatre also return to The Rep: Nativity! The Musical and The Snowman will play in the main house over Christmas.

As part of the commitment to new work, Foley announced that new plays are under commission from a raft of writers including Tanika Gupta, Gurpreet Kaur Bhatti, Terry Johnson, Asif Khan, Anil Gupta and Richard Pinto, Katherine Chandler and Casey Bailey. Gupta has also been appointed as the theatre’s first literary associate.

The Rep has also announced two new associate companies. The McOnie Company, set up by Birmingham-born director and choreographer Drew McOnie, will stage major work in the main house and new theatre-dance pieces across all three auditoria as well as provide artist development for Birmingham-based dancers.

The other is Told by an Idiot, led by Birmingham-born and bred artistic director Paul Hunter, which will develop its unique and internationally recognised participation programme Taught by an Idiot for the city in partnership with The Rep’s own Creative Learning offer.

Looking ahead to 2021, The Rep will bring the touring play, Gatsby, into its main house from 2 to 20 February. Based on F Scott Fitzgerald’s novel and directed by Maria Åberg, it is a joint production between The Rep and Bristol Old Vic, Northern Stage, English Touring Theatre, Royal & Derngate in Northampton, Lyric Hammersmith Theatre and Oxford Playhouse. It starts in Bristol in September.

Pilot Theatre’s acclaimed adaptation of Malorie Blackman’s book Noughts & Crosses – currently a BBC TV series – will stop off on its tour at The Studio from 3 to 7 November.

Also in The Door, Lewis Doherty will present Hawk, a one-man sci-fi horror story that is the third and final installment of his Beast Trilogy, in September.  Demi Nandhra’s Life Is No Laughing Matter about mental illness, suicide and radical cure attempts runs in The Door from 14 to 17 October, while storytelling and lipsync cabaret collide in queer coming-of-age comedy Yours Sincerely by Will Jackson from 11 to 14 November. Jasmine Lee-Jones’s award-winning play Seven Methods of Killing Kylie Jenner, produced by London’s Royal Court Theatre, will run at The Door from 1 to 5 December.

Foley has put his first full season together while still working as a freelance theatre director, including the Olivier-nominated comedy The Upstart Crow currently in London’s West End.

Originally published on 9 March 2020 on BritishTheatre.com.