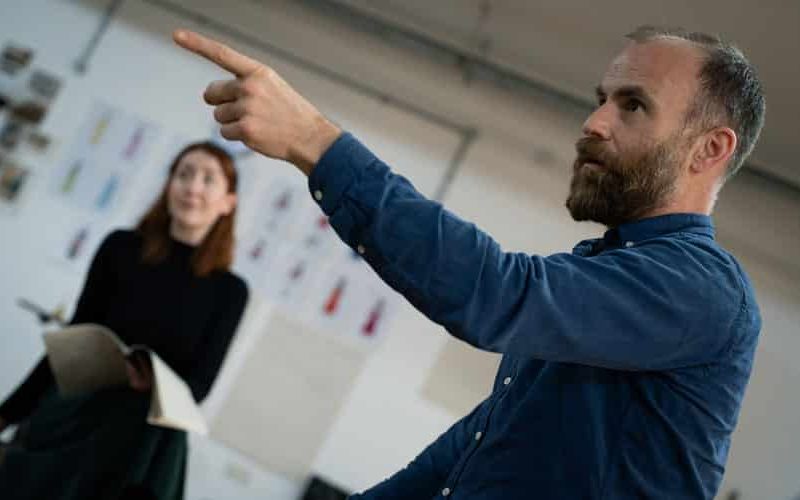 After 27 years, theatre company Northern Broadsides is undergoing a “reboot”. After taking over as artistic director last year, Laurie Sansom is preparing to open his first show, a touring revival of JM Barrie’s Quality Street, alongside other exciting plans for the future. Most recently artistic director of Northampton’s Royal & Derngate and then National Theatre of Scotland, he is looking forward to building on the legacy of founder Barrie Rutter. “It’s a company that celebrates the Northern voice, takes joy in adapting work to any space, both traditional theatres and non-velvet spaces, and has a place as one of the UK’s longest-running, most prolific touring companies based in the North,” Sansom says when asked what appealed to him about the job. “But most significant of all are its bold, accessible, unpretentious productions that have been playing to packed houses across the country for 27 years. Broadsides has consistently punched above its weight considering the small Arts Council grant and its three-and-a-half staff members by having a clear identity and being accessible to everyone. It’s simply a privilege to work on a reboot for the company.”

Now aged 47, Sansom grew up in Kent but his career has been taking him to the North since the early days. Before Northampton and the National Theatre of Scotland, he was associate director to Alan Ayckbourn at the Stephen Joseph Theatre in Scarborough, North Yorkshire, where he directed over 20 new plays. His extensive directing credits in London and around the UK include a production of JB Priestley’s Dangerous Corner for the West Yorkshire Playhouse (now Leeds Playhouse) which transferred to London’s Garrick Theatre.

Quality Street may be a surprise choice for his first production: it was a huge hit when it opened in London in 1902, followed by many revivals and tours, but it fell out of fashion by World War Two. However, not only was it written by the creator of Peter Pan but Sansom discovered it was “genuinely funny, full of twists and turns”. Set in a northern town, it follows a woman who disguises herself as a younger, wilder alter ego to win the affections of her lover who appears to have lost interest in her after 10 years away. With rehearsals underway (pictured), it is being directed by Sansom with a cast led by Jessica Baglow and Dario Coates. “When looking for a title for my first production for Northern Broadsides, I wanted to make sure it delivered a really good night out and brought people together for a good laugh at a time when the country felt at loggerheads with itself,” he explains.

For Sansom, the “slam dunk” was also discovering that the enduringly popular Quality Street tins of chocolates were named after the play because it was such a hit, with its two main characters featuring in the brand’s logo to this day. The chocolates have been made in Halifax since their launch in 1936, making the Yorkshire town’s Viaduct Theatre the perfect place for the first stop of the tour from 14 February before it heads across the North and other English cities. With the theatre company based in Halifax’s Dean Clough Mill, Sansom says: “It’s impossible to avoid the presence of the Quality Street factory in Northern Broadsides’ home town of Halifax – the purple letters even glitter down over the train station’s platform – and, as I also knew I wanted to celebrate Broadsides as one of Halifax’s cultural gems, it was the first of Barrie’s plays I picked up.”

Sansom is adding another dimension to the 119-year-old text by framing the Regency action with contemporary tales from people working at the confectionery company today. “Throughout rehearsals, we have worked with people who, between them, have hundreds of years working within the Quality Street factory. They’ve been sharing stories about thwarted love affairs, messy relationships and growing old disgracefully, and giving their take on the place the factory has had in the life of the town and how things have changed beyond recognition over the years. Their stories and commentary on the action will feature as the frame of it, perhaps like a live-action version of Gogglebox!”

This marks the beginning of a new producing model for Broadsides, developing shows with different “creation squads” formed from the local community. “We’ve created them in the hope that, as a new model of co-creating work with local people, it will transform the stories we tell together, re-invent how we make popular productions of classic plays and discover a new generation of northern artists,” Sansom adds.

Future plans for these “creation squads” include a new production of a “major classic” by a female playwright in collaboration with teenagers from schools in Leeds, Halifax and Bradford to explore the power of teenage girls to disrupt authority and elitist institutions. Another initiative will be a programme to support a new generation of diverse playwrights together with the company’s partner theatres across the region. Northern Broadsides will also continue to make work in collaboration with asylum seekers it has met through St Augustine’s Centre in Halifax, combining Yorkshire folk songs and stories with musical traditions from around the world. A new poetry project is about to start, taking place in the homes of South Asian women in Kirklees and Dewsbury, both in West Yorkshire.

Under Sansom and executive director Kay Packwood, Northern Broadsides will not forget its heritage making Shakespeare’s plays accessible to wider audiences. The company’s first-ever production in 1992 was Richard III, with Rutter in the title role, while its last under interim artistic director Conrad Nelson last year was Much Ado About Nothing. At this stage, Sansom can reveal only that Northern Broadsides will tour “a brand new production of a Shakespeare play the company has not tackled before”. Tantalisingly, he also says they plan to produce “a forgotten play by one of the region’s most important female writers, starring one of the country’s leading actors”. Although he may himself be a southerner by birth, Sansom is ensuring Northern Broadsides maintains its mission to champion theatre old and new with distinctly Northern voices and perspectives.