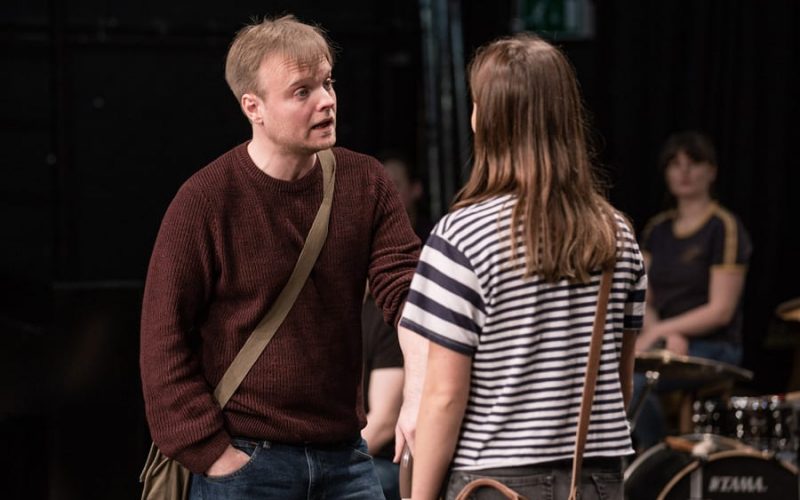 Once the musical has been breaking hearts since it first came to the New York stage nine years ago. After the USA, Dublin and London’s West End, the show is finally embarking on its first UK tour, starting later this week in Croydon. But don’t expect a carbon copy of the original production: a new creative team led by director Peter Rowe is on board, bringing their own vision to the book and score. “It’s very different in terms of the staging of it,” says musical supervisor Ben Goddard. “We very much started as we would with any play and any musical that Peter and I have worked together [on]: we took it off the page and said what are we going to do with it.”

Based on Glen Hansard’s 2007 movie, Once the musical follows the romance between Guy and Girl: two struggling musicians, a guitarist from Dublin and a pianist from the Czech Republic. The original production won eight Tony Awards including best musical and, after coming to London’s Phoenix Theatre in 2013, two Olivier Awards including outstanding achievement in music. It benefits not only from a book by leading Irish playwright Enda Walsh but stirring, emotive music and lyrics by singer-songwriter Glen Hansard and Markéta Irglová, including the beautiful duet, Falling.

For the UK tour, Martin Lowe’s original arrangements have been adapted by Goddard for the particular skills of its 16-strong cast of actor-musicians but the music has as much power as ever, judging by a rehearsal that journalists were allowed into earlier this month (pictured). “The songs are very potent and cut right to the soul,” he says. With Hansard’s style and personality remaining at the core, Once is different from other stage musicals, Goddard adds. “It’s a very, very, very delicate score which means that essentially at the core of it is the singer-songwriter. I think there’s always an element within musical theatre about the performance of it, whereas this really lets the music do the job for you. It draws you in because, ultimately, the music and the words have come from one person.”

The idea of the music drawing you in has influenced the staging. The ensemble remain on stage at all times, even in the more intimate scenes between the two leads, responding through both music and movement to the story. Rowe says this is one way that it differs from the original show directed by John Tiffany. “The focus and the charge that are provided by that on-stage collection of people, involved in both watching and serving the story, is particular to this production.” That difference is mainly “about getting as many people in the story as much as possible”, Goddard adds. “What we have tried to do in this production is make sure every single person tells the story… Everybody on stage has a responsibility towards the arc of it.”

They have also literally gone back to the drawing board with the set, not least because it will be playing venues even bigger than the Phoenix Theatre. Rowe spent time with designer Libby Watson going round pubs in Dublin for ideas on how to create the right look for a show that has the feel of a live gig. “It’s a compilation of the bits that we liked most from a lot of those pubs,” Rowe explains, “particularly pubs that had a small stage for performing music on, which most of them do. I think that the feel of it is that it doesn’t stop, so it goes off into the wings… It feels like that when you come into the theatre so that you are in an Irish pub where people are in the middle of a music session.” As audiences arrive, the ensemble will spend 15 minutes jamming before the main show starts, although there are no plans to invite people up on stage to enjoy a Guinness as in the West End production.

For its Guy, the tour has Daniel Healy who was part of the West End cast and understudy to Arthur Darvill and Ronan Keating when they starred in the lead role. He also played the part when Rowe directed Once for a short run at the New Wolsey Theatre in Ipswich and Queen’s Theatre Hornchurch in September and October last year. Emma Lucia also returns as Girl after debuting in the role in Ipswich. Although it is a romance between these two people, Rowe says that Once the musical is much more than that. “It’s a celebration of music-making and the power of music.”

Originally published on 17 December 2019 on BritishTheatre.com.