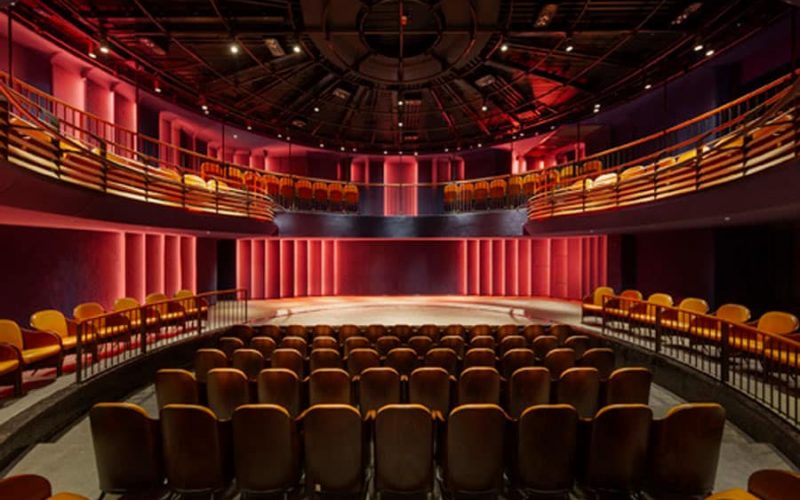 Mark Ludmon visits London’s new Boulevard Theatre to meet its two directors and the cast and creatives of its first show.

The first-ever show has now opened at London’s newest theatre, the Boulevard, in the heart of Soho. The cast of Dave Malloy’s musical Ghost Quartet, Carly Bawden, Zubin Varla, Maimuna Memon and Niccolò Curradio, are the first to perform before audiences in the 165-capacity space that has been created as part of the redevelopment of Walker’s Court, next to Berwick Street. It takes its name from the Boulevard Theatre which was once a neighbouring sister venue to the former Raymond Revuebar and a destination in its own right for theatre and comedy, including The Comic Strip team and stand-ups such as Eddie Izzzard, until it shut in 1989. While the new theatre occupies a similar space, it has been built from scratch to modern designs from architects Soda Studio and theatre consultants Charcoalblue.

The rectangular auditorium’s modern interior features stalls and balcony in a style inspired by Art Deco. It has been designed so that the space can be rotated at both stalls and balcony level thanks to the wiring and technology all being built in. The set-up allows for at least six different configurations, from traverse and thrust to the current staging of Ghost Quartet in the round. For Carly Bawden, the space is ideal for the “intimacy” of Dave Malloy’s sung-through musical in which four friends each tell their own dark and magical tales, infused with love, loss and whisky. “It’s pretty perfect for the show. I love how close everyone is, how close everyone feels. You can pretty much eye-ball everybody in the audience which is really thrilling as an actor. It’s a really beautiful, intimate space.”

The current configuration also delights Zubin Varla who loves playing in the round. “I can tell that the audience feel very connected to us from the looks in their eyes, from the way they lean in so far. There is a huge sense of being embraced in a space like this.” The closeness means that every spectator has their own unique experience, points out Maimuna Memon. “When I’m playing so close to someone, it is like roulette where you sit and what you experience so everyone will get a different experience from where they are sitting.” Whereas traditional proscenium theatres create a fourth-wall distance between the actors and the audiences sitting out in the dark, the cast of Ghost Quartet find it very different playing a small space so close to the spectators. “You can certainly see the audience members,” Maimuna says. “There’s no wall between us. As an actor, it can be quite daunting, especially on your first show, to look straight in an audience member’s eyes. You don’t know how they’re going to react, everyone is going to be different, but we try to welcome them in as much as they can and hope they enjoy it. We learned so much from our first preview because what this show needs is audience members. Some people feel uncomfortable when you look them right in the face but, as the show goes on, they start to relax. It’s so important that they’re right there because they are integral to the story.”

The intimacy of the Boulevard’s space is also part of its appeal for Ghost Quartet’s director, Bill Buckhurst. “It feels really immersive in a positive way when you’re watching the show here. The relationship between actor and audience becomes really exciting, really dynamic in this space. One of the major themes of the show is storytelling. It’s about the simple act of telling stories to each other. So this space really lends itself very well for that because it allows for a really shared experience. You can really communicate well with every single audience member in here because you’re so close on that level.”

To have a song cycle as the first show has been a great way to kick off the opening, says Rachel Edwards, the Boulevard’s artistic director. “There is something really celebratory about music. So to hear this fantastic music in this tiny, beautiful, postage stamp of a theatre is just absolutely thrilling.” She has pulled together an impressive line-up for its first season, with Ghost Quartet followed by the London premiere of Cormac McCarthy’s The Sunset Limited, directed by Terry Johnson, and then a revival of Lucy Prebble’s The Effect directed by Anthony Nielson. After that, Yaël Farber directs Athol Fugard’s Hello and Goodbye, and then, taking the season into November 2020, Kathy Burke directs Billy Roche’s The Cavalcaders. “My taste is quite eclectic so the season reflects that,” Rachel explains. “We have some fantastic people coming through the door, and they are all so very different from each other. For me, especially this first year at the Boulevard, it’s about trying to get really good artists into the building but also about just experimenting and seeing what works because we will be exploiting lots of different configurations.”

Alongside these productions, leading West End and cabaret stars will bring late-night entertainment every night from Wednesday to Saturday, such as Black Cat Cabaret hosted by Dusty Limits which begins a weekly residency from tonight (2 November). Other regular events include music night Soho Sounds: Jazz and Finale featuring musical theatre stars such as Natasha Barnes and Fra Fee. Sundays will feature music, poetry and live podcasts. Then there is the new bar and restaurant, which is open from 8am weekdays and 10am at weekends until 1am Mondays to Saturdays and 9pm on Sundays – a destination in its own right from breakfast through to late-night cocktails.

Making the Boulevard more than just a theatre space was important to Fawn James, the grand-daughter of Paul Raymond, the founder of Raymond Revuebar and the broader Soho Estates property group. As director of Soho Estates, which she joined 10 years ago, she sees the Boulevard as a key part of her vision to keep Soho as an arts and entertainment district. “I wanted there to be equal emphasis on different aspects of the business, so we are primarily a theatre but you can join us in the building from eight o’clock in the morning. You can have breakfast, lunch, dinner…. It’s a place to come and have conversations and explore creativity. You could come and see a show and then stay in the bar and have a drink and chat about it, and there’s the late-night programme as well, so it’s something for everyone which is what we were wanting to achieve.”