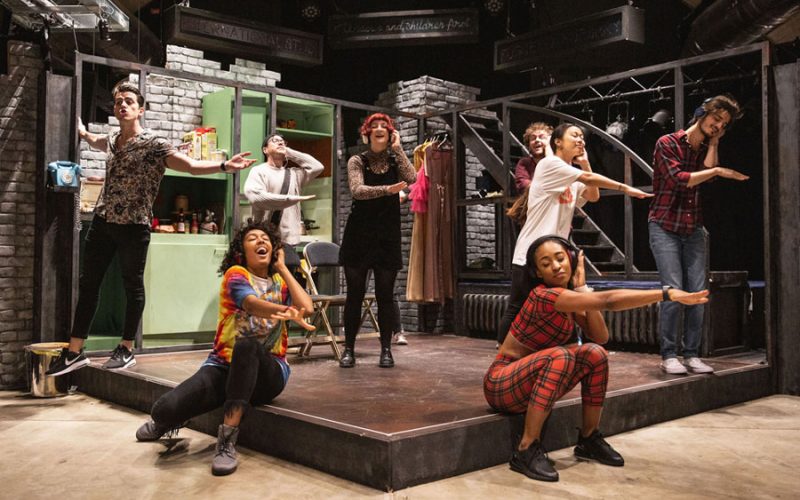 As the lads in the record shop eye up Barry’s custard creams, we can tell we’re not in Chicago anymore. Comedian and composer Vikki Stone has injected a distinctly English vibe into the new version of the musical based on Nick Hornby’s bestselling 1995 novel High Fidelity. Originally set in Camden in north London, the story was relocated to Chicago for the 2000 film version with John Cusack and then to Brooklyn when the musical premiered on Broadway in 2006 with a book by playwright David Lindsay-Abaire, music by Tom Kitt and lyrics by Amanda Green. Starring Will Chase, it lasted only 10 days before closing, but Paul Taylor-Mills, artistic director of Battersea Power Station’s new Turbine Theatre, believed that, with rewriting and a new director, the musical would find its feet in 2019 back in its original London setting.

Taylor-Mills loved both the musical and Hornby’s original book and felt the timing was right to bring it to Turbine Theatre where it will run from 21 October to 7 December this year. It follows thirty-something Rob who runs “the last real record store on earth” that has become a hangout for lonely music aficionados. Alongside an obsession with lists, he is trying, and failing, to get over his love for ex-girlfriend Laura. With its portrait of men struggling with emotional connections, Taylor-Mills feels the world is now ready for the musical. “I’m a huge fan of Tom, David and Amanda who worked on the show originally but I think it just wasn’t the time for this show, in 2019 where we have a very different lens on the world after the #MeToo movement.”

He brought in Stone who is not only a successful composer but an award-winning stand-up who combines comedy with song. She was already a fan of Hornby’s book and, after re-acquainting herself with it and listening to the Broadway musical recording, she set to work on introducing custard creams and other details to bring the story back to Camden. The show had already been through a number of revisions since Broadway, including an attempt to relocate it back in Chicago, but Stone and Taylor-Mills were especially concerned that, in 2019, the emotionally challenged Rob should not come across as just a lad. “The thing about Rob is that, even though he hasn’t got his stuff together, deep down you like him,” Stone explains.

Another key ingredient in the mix for the new production was the director, Tom Jackson Greaves, who has won acclaim for his work as a director, choreographer and movement director including choreography for the current tours of Amélie The Musical and Priscilla Queen of the Desert. Delving into the story for the first time, he was struck by what it has to say about the challenges of emotional connection and communication for Rob and the young men in the record shop. “They don’t have a way of reaching out and talking about their emotions,” he says. “This is so timely.” He feels it is more relevant than ever in the age of mobile phones and social media, when “face-to-face contact is really tricky and we struggle with that more and more. “Actually the heart of this story, it’s about love, it’s about forgiveness, but it’s also about communication. This is a time when we need to be talking about that and men being able to talk to each other about how they’re feeling and then being able to talk to their partners about how they’re feeling. That’s a really universal thing that we can all really connect with. We all feel that in some way, shape or form.”

They have brought together a talented young cast including Oliver Ormson as Rob, Shanay Holmes as Laura, Robbie Durham as Barry, Carl Au as Dick, Bobbie Little as Liz, Rosie Fletcher as Anna, Robert Tripolino as Ian and Eleanor Kane as Marie as well as Joshua Dever, Jessica Lee and Lauran Rae. With Jackson Greaves also adding new choreography, the creative team is completed by David Shields on design, Dan Samson on sound design, Andrew Exeter on lighting design and Helen Siveter as associate director. “The story is a cast of misfits, people that are lonely and people that are reaching out,”Jackson Greaves adds. “The story is about people who are reaching out and wanting love and wanting friendship and they don’t have it. That straightaway makes me go, I want to know about those people and I want to see their journey.”

Like the first-person narrative of the novel, Ormson’s Rob regularly breaks the fourth wall, drawing the audience into his romantic misadventures. Jackson Greaves hopes that everyone will feel they are actually sitting inside the shop, with the Turbine Theatre space reworked with some of the spectators sitting on beanbags and sofas. “I hate the word ‘immersive’ but it should feel like, as an audience, you are plunged into a story and then you are part of it and you are integral to the storytelling because you’ve got Rob talking to you the whole time.” In the hands of this new team, the time and place could finally be right to connect with Rob and the misfits in the last real record store on earth.

High Fidelity runs at The Turbine Theatre at Battersea Power Station in London from 21 October to 7 December 2019.