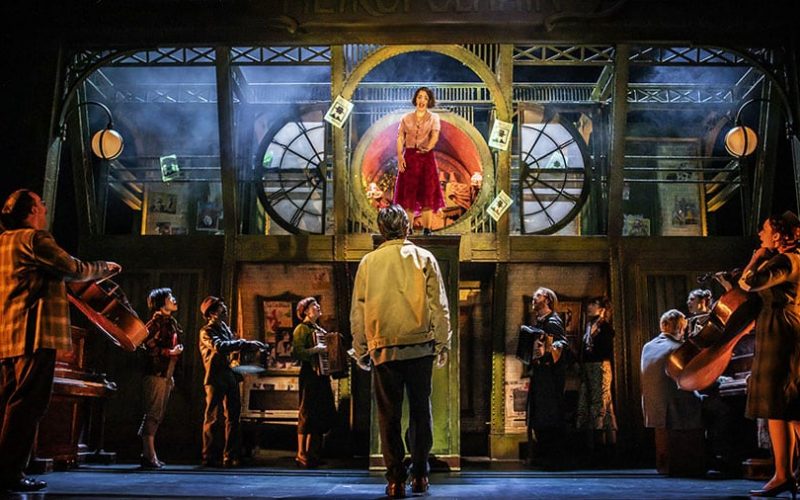 Michael Fentiman traces the journey of Amélie The Musical from film and Broadway to The Other Palace in London. Mark Ludmon reports

Eighteen years on from the release of hit French film Amélie, the stage adaptation is very much a show for our “divided” times, according to Michael Fentiman, director of the UK production. “The film always spoke about remoteness, but its moral is a simple one that ultimately, even in times when you feel most divided from the world, fate and human nature will pull you back to something more communal, something more hopeful, something more loving.” Starring Audrey Tautou, the 2001 film captured hearts around the world with its quirky, romantic story about a young Parisian woman who has withdrawn from the world but secretly performs acts of kindness for others. It was adapted for the stage with music and lyrics by Daniel Messé and Nathan Tysen and a book by Craig Lucas, debuting in Los Angeles in 2015 and running, for two months, on Broadway in 2017. After its lukewarm reception Stateside, it was “heavily reworked”, with Fentiman at the helm, before bursting onto the stage at the Watermill Theatre near Newbury in Berkshire in April this year. Its success has been followed by a UK tour, finishing at The Hexagon in Reading and Liverpool Playhouse this month before coming to The Other Palace as its Christmas show from 29 November to 1 February.

Fentiman suspects the original US production struggled because it lost some of the French spirit and “phraseology” of the film. “I think maybe performing it with an American culture behind it, American accents, American music, a sense of Americanness, was probably tonally confusing,” he explains. “Also the production was much more expensive, big and impressive in lots of ways, and maybe that served to cramp something that is very small and delicate and beautiful.” With composer and orchestrator Barnaby Race, they went back to look at every version of the text and songs in the show’s history to try to uncover its creators’ original intention. It now runs to two hours and 30 minutes with an interval instead of Broadway’s 90 minutes without a break but it has a smaller company of 13 actor-musicians including Chris Jared as Nino – the role played by Danny Mac on tour. Fentiman says they also studied the original film’s music by Yann Tiersen, which is full of classical references such as Debussy and Mahler, not to replicate it but to understand its “spirit and heart and essence”. With designer Madeleine Girling, he sought to “conjure” their own version of the film’s “poetic realism” which also led him to make it a production with actors playing all the instruments. “There are things that film can do that theatre can’t, and when theatre tries to replicate film, it always struggles on various levels because it doesn’t physically move in the same way, nor does it emotionally move in the same way, so the actor-musician form gave us a bit of lift-off to find our own version of the charm of the film.” He adds that its appeal has been unaffected by the size of venue on its 20-stop UK tour, which took it straight from the 200-seater barn-like Watermill Theatre to London’s 1,600-seat New Wimbledon Theatre in May. “It seems, in all the different venues, audiences connect to it in the same way.”

French-Canadian actor Audrey Brisson, well-known for physical theatre such as Cirque du Soleil and The Flying Lovers of Vitebsk, was Fentiman’s favourite for the title role because of her “unique bizarre charm” after he worked with her on The Lion, the Witch and the Wardrobe at London’s Kensington Gardens in 2012. (She played a hedgehog.) “Audrey brings out a slightly savant-ish quality which I think is there in Audrey Tautou but it sort of cuts out some of the sugar,” he suggests. The result, he hopes, is a show that finds a balance between being moving and unsentimental. “What’s interesting is some people adore the film and, if they adore the film, then luckily they like the musical, but what’s been great is, if you don’t like the film, if you find the film too much sugar for your tea, you like the musical, and that’s partly due to Audrey’s performance.”

He believes Amélie The Musical will especially resonate with audiences in London. “I think Amélie is about isolation, specifically isolation in the big city, so Paris in this instance, and it’s about the idea that, while you can be surrounded by people, you can fill your life with things that pull you away from people, that keep you disconnected. I wouldn’t say that Amélie is attempting to make any big political statements but what I would say is that, at the moment, we live in quite complex, some would say divided, time.” Its message has especially resonated with young people on tour, he adds. “What we found is that we have got fans, young people that see the show a lot and follow it all round the country, multiple times, and I feel like young people recognise a moment in their lives where they feel isolated, maybe more so now that we live in a time where social media and all these things are going on. We do live in a time when we are having a sort of mental health crisis for the young, anxiety is through the roof, issues of identity and dysmorphia. It’s a complex time to be a young person and you can feel remote and isolated. What I find moving about it is there are people who are feeling like they see hope in the character of Amélie or they see hope in the character of Nino. They see a way out from their particular moment of isolation.“

Amélie The Musical runs at The Other Palace, London, from 29 November 2019 to 1 February 2020. The tour is at The Hexagon in Reading from 8 to 12 October and Liverpool Playhouse from 14 to 19 October. It will tour internationally in 2020, with dates to be announced.

Originally published on 9 October 2019 on BritishTheatre.com.