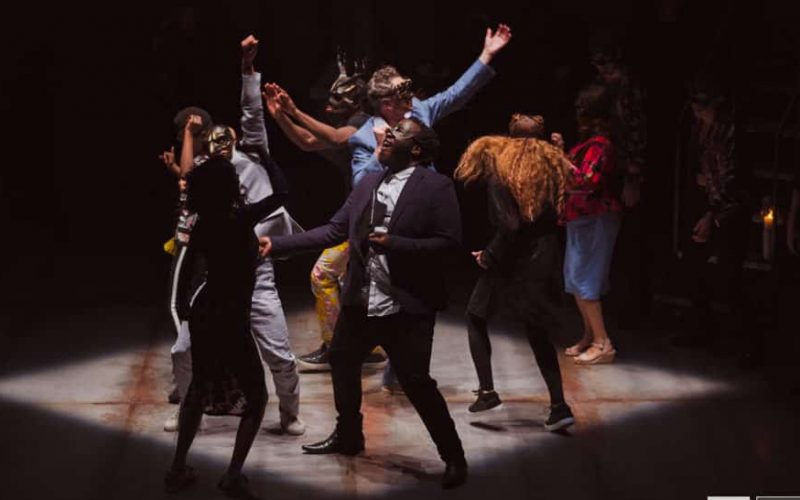 Mark Ludmon examines efforts to improve recognition for the work of movement directors in British theatre.

At this year’s Olivier Awards, 12 of the nominations were for productions featuring the work of movement directors – but these key creatives’ names were not to be heard. The best new play, The Inheritance, earned awards for director Stephen Daldry and lighting designer Jon Clark while nominations also went to Bob Crowley for set design and Paul Arditti and Christopher Reid for sound. By, despite critics praising its “rollercoaster energy”, there was no accolade to specifically recognise the input of leading movement director Polly Bennett. She also worked on two other nominated shows, The Lehman Trilogy and Sweat, and, while celebrating her colleagues’ achievements, she is one of several practitioners calling for awards specifically for best movement.

With 24 categories and a three-and-a-half-hour ceremony, Oliviers organiser SOLT is reluctant to extend the list further. According to a spokesperson, the existing category of best theatre choreographer “encompasses movement direction for plays as well as choreography in musicals, and examples of this type of work are usually eligible each year”. Movement work does make it onto the long-lists from the judging panels but final voting by SOLT members favours musical theatre. Despite a pick of shows featuring actor-movement, this year’s nominees were for choreography on The King and I, Six, Company and Come From Away, which was the winner. As Bennett commented, “Until movement is separated by the people who tell the world what making theatre involves, voters won’t be able to distinguish the two either”.

Grouping the two under the banner of choreography is to the detriment of movement points out movement director Shelley Maxwell who has worked on award-winning shows including last year’s Nine Night and Antony and Cleopatra at the National Theatre as well as Equus which is running at London’s Trafalgar Studios until September after touring. “Though this provides some inclusion, I think it’s quite challenging to measure choreography against movement direction in terms of an awards category,” she says. “They truly are two different skill sets and, as such, I do believe they should be both viewed, judged and awarded accordingly. There are currently many in the industry pushing for this but, as we know, things don’t happen overnight.”

While there are no dedicated categories for movement in Britain, The Irish Times added best movement for the 2018 Irish Theatre Awards. According to one of the judges, Ella Daly, this “allowed us to consider and acknowledge for the first time the significant contribution of movement directors, stage directors and choreographers to the landscape of theatre”. The category still encompasses musical theatre but, by drawing attention to the wider discipline, nominations and awards have been for actor-movement in plays including this year’s winner, movement director Sue Mythen for The Lost O’Casey, a drama about Dublin’s housing crisis.

Being left out at awards ceremonies is part of a broader lack of public awareness of the work of movement directors outside of the people making theatre. The Royal Shakespeare Company’s Romeo and Juliet, which toured until January this year, stood out for the energy and dynamic physicality of its performances but no mainstream newspaper critics and only a handful of regional websites credited the contribution of RSC associate artist, movement director Ayse Tashkiran. With a 15-year career, she is also the co-course leader for Movement: Directing and Teaching at London’s Royal Central School of Speech and Drama – the longest-running course for movement directors in Europe. Although she avoids reviews as “they will never satisfy me”, she believes more could be done to reflect how essential movement is to performance. “I don’t want to point the finger at journalists because I sort of agree with [critic and journalist] Matt Trueman when he says, ‘I don’t want to-do lists of name-checks in a review’. What I do mind is where a journalist has gone through the process of going, ‘The composition is this, the lighting is this’; then I start to feel a bit prickly because I definitely feel that I’m part of the creative team. If you are going to check in with music, I probably had as much to do with your feeling of the music as anybody else. Equally, with lighting, we are in a visual world so if you’ve got the language to talk about lighting, you’ve got the language to talk about movement. My wish would be that, if there is a movement director on the programme, to look at them with equal interrogation in relation to the creative team.”

The problem is not within the industry itself, Tashkiran is quick to point out. “There’s massive visibility within the actual rehearsal room and within the cultures of rehearsal and organisations. It’s integrated, it’s unquestioned. The really great directors are brilliant about movement, and they have such movement ambition. You’re there because you’re going to meet their ambitions, and my job is to match that and take it somewhere that they didn’t even imagine.”  She has traced the job title of “movement director” back to Geraldine Stephenson’s role on the York Mystery Plays for the Festival of Britain in 1951, but she stresses that actor-movement itself is as old as acting itself, covering the physical life of any production. “If one was to do a proper history of movement direction, you’d have to be a little bit careful that what you’re not doing is going, ‘If they’re not in the programme, there was no movement’.”

Tashkiran is a champion for one of the pioneers, Litz Pisk, author of influential 1975 book The Actor and His Body, who was co-owner of a school of “movement arts” in Vienna in the 1920s before becoming a teacher of movement – or “mime”, as it was known – at RADA in London in 1936. She went on to teach movement at the Old Vic Theatre School and then Central while working with director Michael Elliott and his Old Vic company where she was in-house director of movement. The flourishing of movement direction from the 1950s owed much to the development of larger institutions such as the Old Vic, the National Theatre and the RSC with their bigger casts and focus on visual composition, later built on by movement directors including Sue Lefton, Jane Gibson and Struan Leslie. With schools such as Central, Guildhall and Manchester Metropolitan University producing a new generation of movement directors, the discipline is now “flourishing”, Tashkiran says. To reflect this, practitioners themselves need to take action, she adds. “We are making progress in that aspect but we also need to step forward.”

Maxwell’s work has been well credited in reviews of Theatre Royal Stratford East and English Touring Theatre’s production of Equus, directed by Ned Bennett, which premiered at London’s Theatre Royal Stratford East in February before touring. The actors’ muscular embodiment of horses and Ethan Kai’s highly physical performance as Alan Strang led to both movement and movement director being praised by critics, from The Times to BritishTheatre.com. Aside from Maxwell being put forward for media interviews, it certainly did no harm that the only article in the show’s programme was a two-page Q&A about her career. “It is helpful if theatres include movement directors in their creative listings, even if the movement director was only brought in as a consultant,” Maxwell says. “This way the general public and journalists alike are aware that there is a movement director attached to the production. This helps facilitate more exposure as well as providing the potential for them to be credited in reviews alongside their other creative colleagues. Though we don’t create theatre in essence for the glitz, glam and glory, it’s nice when all the factors that go into its creation are acknowledged and recognised.”

After starting out as a performer in dance and musical theatre, Maxwell has been focusing on movement direction for the past three years and is working on two more National Theatre productions, Hansard, running from August, and “Master Harold”…and the Boys and Hansard, from September. “I have witnessed a notable change in the inclusion and mention of the work of movement directors over the years in print,” she says. “Though this is definitely not yet fully common practice, it is a step in the right direction given the scope of the work that many movement directors do when working on productions.” She notes that actor-movement was thrust into the spotlight by award-winning film Bohemian Rhapsody. “Here the actor Rami Malek and movement director Polly Bennett both received accolades for the remarkable work done on embodying the physicality of Freddie Mercury. I think crediting actors on their performances and also acknowledging events of masterful physicality by them is useful in placing the spotlight on all aspects that go into a performance.”

Tashkiran also believes that writing programme notes had a positive impact on journalists after seeing her words influence coverage in reviews such as the RSC’s As You Like It which she worked on with Maria Aberg in 2013. “I expose the process to them and give them a shape and language, and often that language comes back to me in the reviews.” Other platforms such as video, podcasts and blogs offer a chance for movement directors to talk about their work to a wider audience such as the RSC’s use of short online films, Tashkiran suggests. “I encourage all of my graduates to try to participate in rehearsal photos, blogs, write programme notes, do that interface stuff – which is really hard for movement directors to do because they are often paid quite modest fees and running from job to job.”

As well as writing an upcoming new book on movement direction, Tashkiran worked on The Provoked Wife with director Phillip Breen, running at the RSC’s Swan Theatre in Stratford-upon-Avon until September – praised by critic Libby Purves for its “terrific movement direction”. Tashkiran has been an associate artist at the RSC since 2017 but notes she is only the third movement director to receive this title in the RSC’s history, with the rest mostly being actors, directors and writers. “The emphasis on their associates has definitely been the aspects that leave traces, written traces,” she suggests. As movement directors look for their work to be better seen and recognised, she adds that, without leaving traces, movement can be seen as especially ephemeral. “It goes from body to body and it often occupies the in-between spaces, even in a rehearsal process, so the medium of movement direction has to work harder to leave an imprint in the minds of those outside of the rehearsal process.”