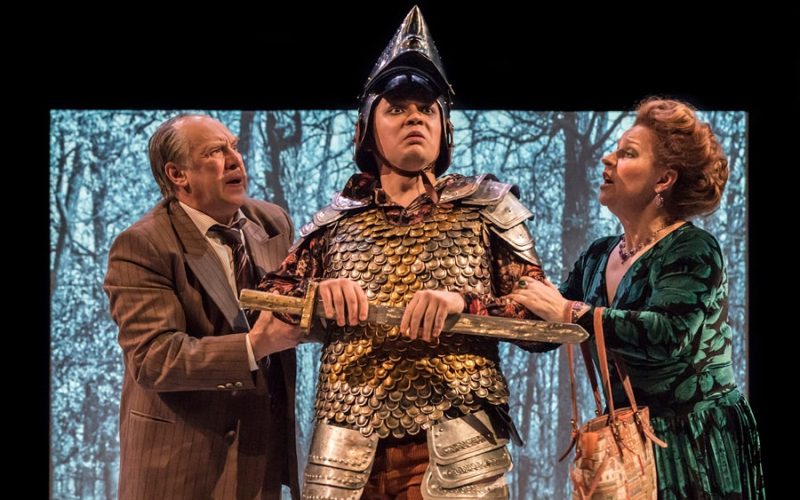 Eight actors sit on plastic chairs across a broad stage which is otherwise bare except for a large white box. The head of one of the actors is projected onto the box as he slowly speaks the obscure prologue to Francis Beaumont’s 1607 play, The Knight of the Burning Pestle. Pavel Akimkin’s sonorous music brings an ominous tone as the cast are gripped by stylised movements that anticipate their characters’ stories. It seems we are in for a night of classic Jacobean drama in the continental European style. But then the stage is suddenly invaded by Nell and George, a couple from the audience, and the action spirals into a chaotic and entertaining show that explores theatrical form and how spectators respond to theatre.

This is another classic reinvented by director Declan Donnellan and designer Nick Ormerod of Cheek by Jowl, but much of this self-aware, self-referential “meta-theatricality” is the work of Beaumont. Although it is massively abridged, it is still built around the staging of a middle-class family drama, The London Merchant, where rich businessman Venturewell tries to thwart the love affair between his daughter Luce and his apprentice Jasper by marrying her off to his friend Humphrey. As at London’s Blackfriars Theatre in 1607, George and Nell step in to complain about the play, eventually propelling another audience member, their nephew Rafe, to join the cast and add a new improvised plot about a valiant knight, reminiscent of Don Quixote.

The play was famously a flop, which was blamed on Jacobean audiences not understanding its satirical irony. Now we are much more familiar with “meta”, both at the theatre and on TV, but there is still something subversive in breaking the fourth wall between the stage and the darkened auditorium, especially at a monolithic venue like the Barbican Centre. Cheek by Jowl brings Beaumont up to date with video cameras, projection and microphones, and it’s not just 17th-century plays and audiences that are being satirised: when Nell says “there should be a beautiful set and costumes”, she speaks for many audiences who miss the realistic naturalism rejected by modern European directors. “It’s a concept,” explains one of the actors defensively, but their stylised performances are repeatedly exposed as artificial by the more lifelike Nell and George sharing their critical commentaries from the side of the stage.

Agrippina Steklova and Alexander Feklistov are charming and hilarious as the couple who exhibit all the qualities that regular theatre-goers normally hate. They chat, heckle and snack their way through the production, not caring that they stop the action in pursuit of an autograph or a selfie. The rest of the cast display looks of increasing exasperation and distress as they pander to the couple’s every demand, drawn puppet-like into their knightly fantasy. Kirill Chernyshenko and Anna Vardevanian as Jasper and Luce and Kirill Sbitnev as Rafe’s reluctant “squire” Tim are delightful in their suffering – Vardevanian in particular looks a broken, traumatised husk by the end.

This is the latest co-production between Cheek by Jowl and Moscow Pushkin Drama Theatre, reflecting the theatre company’s decades-long involvement with Russian theatre. Staged at the Barbican with English surtitles, it is another fantastic opportunity to catch the best in continental European theatre even though, on this occasion, Cheek by Jowl is poking fun at it.

Originally published on 6 June 2019 on BritishTheatre.com.