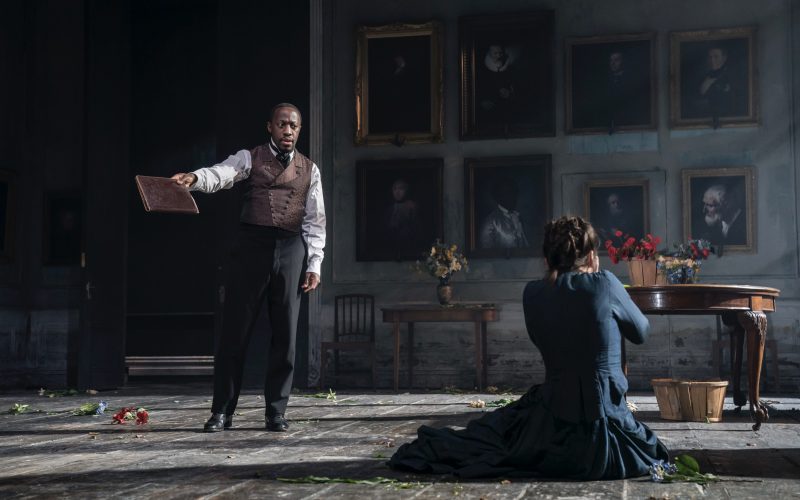 After a year-long Olivier-winning run as Aaron Burr in Hamilton, Giles Terera is preparing for a role that is a world away from Lin-Manuel Miranda’s rap and hip-hop musical. He is currently in rehearsals for a new adaptation of Ibsen’s 1886 drama Rosmersholm that will be seen at the Duke of York’s Theatre in London’s West End from April 24. His role is Andreas Kroll, a conservative teacher who attempts to stop his brother-in-law John Rosmer, played by Tom Burke, from abandoning his traditional heritage to embrace radical political reform, represented by Hayley Atwell’s free-thinking Rebecca. However, Giles does not see it as that different from Hamilton after having success in both musical and “straight” theatre throughout his career. “I think storytelling is storytelling, and people are people, and needs are needs,” he explains. “So no matter what the vehicle to tell the story is, the story is still the same. In our society, everything needs to have its place, we like to be able to label and box things and I don’t really subscribe to that. I think if you’re an artist, whether you are a dancer, an actor, a writer, a painter, you are drawn to the arts because you want to express something that you’ve felt or experienced or seen.”

Before joining the original London cast of Hamilton at the Victoria Palace Theatre in December 2017, Giles already head an impressive track record in musical theatre since winning the lead of Ugly the “duckling” in Stiles and Drewe’s Olivier-winning Honk! at the National Theatre in 1999, including roles in The Book of Mormon, Rent and Avenue Q where he played Gary Coleman. While Giles trained at musical theatre powerhouse Mountview Academy, his degree was in Acting, propelling him into non-musical roles in plays, mainly with the Royal Shakespeare Company and the National Theatre. Over the past three years, he has been in August Wilson’s Ma Rainey’s Black Bottom at the National, Shakespeare’s The Merchant of Venice at The Globe and Brecht’s The Resistible Rise of Arturo Ui at the Donmar Warehouse. “People do want to pigeon-hole me but I tend not to focus on that too much,” he says. “I always like to do different things. It’s attractive if it’s something I’ve not done at all.” As he has never done an Ibsen play, this was one reason that Rosmersholm appealed to him, he adds. “I’m not really familiar with Ibsen apart from some of his more well-known works perhaps, so it’s very attractive for that: what would it be like to spend a few months in this world and how will that stretch me and challenge because I want to do what is going to challenge and excite me.”

This is also what drew him to Hamilton. “I knew that I had not been in the presence of that kind of writing and that kind of storytelling in that way before,” he recalls. “The score, the incredible way that it’s staged, and the choreography – it is storytelling of the absolute highest order.” After handing over the role of Burr to Sifiso Mazibuko at the start of December, he returned to see the show as an audience member a few weeks later. “I just cried my eyes out,” he says. “It was very moving to see it. There were only seven or eight of us who left but Jam [Westman] was still being brilliant as Hamilton as were Cleve [September] and Jason [Pennycooke]. It was great to see new people doing it, bringing other things. When we were performing, I tended to be down at the front and it was great to be reminded of the detail of the piece, the detail of the choreography and staging and storytelling.” Hamilton’s success and its legions of fans meant that performing in the show felt a “massive responsibility”, Giles adds. “The way people feel about that show is very, very special and it’s great to be in the presence of that kind of energy. This connection that the audience have to the piece is palpable in the theatre and outside the theatre, and that is a real joy to be in the presence of. You could ask every member of the 1,500 people in the audience what it was about the show that they liked and you’d probably get 1,500 different answers but, for me, it was a combination of being able to hook you in with really great melodies and great lyrics to a real, essential human experience story.”

In this respect, Giles compares Lin-Manuel’s writing to that of Shakespeare and Ibsen. “All good writers, no matter how different they are, what their backgrounds are, are interested in the human experience and people’s essential relationships with each other, with their children, with their parents, with the people that they love, and that’s what Lin-Manuel really focuses on. In Hamilton, it’s set against a huge geo-political backdrop of the American War of Independence but he beautifully also hones in on the essential human relationships, which is again what Ibsen does.“ Hamilton’s appeal also owes much to Lin-Manuel’s “love of language and imagery and rhyme”, Giles adds. “I did it for a year and I never ceased to be amazed and captivated by his relish of language and his playfulness with it.” Giles draws links with the way language was used by writers and politicians during the American War of Independence and how modern American artists have turned to rap and hip-hop to express themselves. “None of his characters simply use language for its own sake but to effect change. Like Shakespeare, Lin-Manuel is saying human beings use language to change other human beings.”

Social and political change was the inspiration for Ibsen when he wrote Rosmersholm. He returned to his native Norway in 1885 after 27 years’ living abroad in self-imposed exile to find his country in turmoil. As Giles explains, “he was shocked at what was happening politically and how much aggression and fighting there was from both sides and how ugly the atmosphere was between both sides”. In its depiction of an individual torn between a traditionalist past and a liberal future, Rosmersholm still resonates today. “Unfortunately, human beings are quite fond of cycles and, in the intervening 133 years, there are times when societies and communities go through the same thing of how do we communicate with each other, how does a society cohere. In a way, it is very similar to Hamilton where independence is gained and then you say, ‘How are we going to forge a community, a society out of such disparate opposing views?’. If your society is going to survive, you need to find a way of communicating with each other, which is very much where we are now.” While still set in Norway in the late 19th century, Rosmersholm has been adapted by Duncan Macmillan, who won acclaim for his visceral stage version of 1984 with Robert Icke. “What’s brilliant about this adaptation is how Duncan Macmillan has really honed in on the urgency of the piece and the tension and the pressure that the characters are under, especially Rosmer, while at the same time maintaining the beauty of the language and the imagery,” Giles says.

This topicality helps to challenge critics who insist plays by “dead white men” no longer have a place in today’s theatre but Giles agrees there is more to be done to reflect the diversity of modern Britain. “The world changes and, as societies grow, we move in hopefully richer directions in terms of what our communities look like and feel like and sound like. Therefore what should happen is that the art that we create reflects that society.” From the gender pay gap and lack of opportunities for white working-class creatives to the shortage of roles for Asian and Middle Eastern actors, he believes there is still a pressing need for action in the theatre industry just as there are challenges in wider society highlighted by the likes of the Windrush scandal, the failure to house Grenfell Tower residents and the continuing prevalence of gang culture and knife crime. “The things that are happening in our society are pretty much reflected in the things happening within our industry. A lot of those ideas and prejudices are entrenched and therefore need to be brought into the light. They need to be exposed and therefore need to be acknowledged and discussed, and there needs to be an atmosphere where people feel able to have these kinds of conversations. Going back to what Rosmersholm is about, people must first acknowledge the reality of people’s lives and then work out a way to communicate in order to move forward.” It is down to the “gatekeepers of our cultural institutions” to lead the way and reflect society, he adds. “I think there’s a real effort to want to do that but it needs driving and it needs initiative. But it is one thing to talk about it, it’s another thing to get up and do something about it. I think there’s a time for talking and there’s a time for doing.”

When I meet Giles at a studio in Southwark, the cast are just over halfway through five-and-a-half weeks of rehearsal – longer than the standard three to four weeks for commercial West End plays. This has been a great opportunity for director Ian Rickson to explore the text and characters with the cast, which also includes Peter Wight, Lucy Briers and Jake Fairbrother. “We play lots of ‘games’ improvising little moments,” Giles says. “If a character talks about an event that’s happened in the past, we might just explore that a little bit for a few minutes and see what that event would have been because so much of Ibsen is about what happened in the past. They are very simple situational improvisations which help guide us as actors to a richer understanding of the story and the characters and the relationships between people.”

Rosmersholm is keeping Giles busy until the run ends on 19 July but he is also working on a few other projects including early development of an idea with producer Cameron Mackintosh – all Giles can reveal is that it features “a historical figure”. More advanced is The Meaning of Zong, a play he has written for Bristol Old Vic, telling the real-life story of a massacre aboard the slave ship, Zong, in 1781, which was a trigger for Britain’s abolitionist movement. After a workshop last October, they are hoping to stage it in Bristol later this year. He is also working on a book aimed at providing guidance for young actors and theatre-makers. “Helping young artists is very important because it is increasingly difficult for young actors from certain backgrounds.” This is also why he was delighted to be invited onto the board of Mountview to support the training of the next generation of actors and creatives.

Giles has also found time to fit in three concerts, with special guests, at Crazy Coqs at Brasserie Zédel in London on 12 and 26 May where he will celebrate music from the shows he has been in as well as classic songs that have inspired him along his journey. “I used to do a fair few concerts whenever I could but, because of Hamilton, I haven’t really done any in the past couple of years,” he adds. “It’s very exciting. If you’re standing in front of a microphone and there’s a band behind you, it’s still me telling a story about a human being who’s in a situation. The method by which a story is being told might be slightly different but the story is still the story.”

Rosmersholm is at the Duke of York’s Theatre in London from 24 April 2019.

Originally published on 10 April 2019 on BritishTheatre.com.