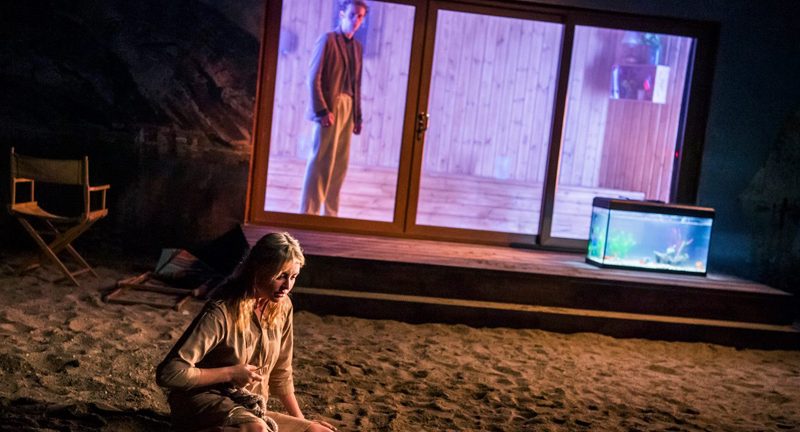 In Henrik Ibsen’s 1889 classic The Lady from the Sea, a woman finds herself caught between her husband’s land-locked family and the call of the ocean and a lover lost at sea. In the new London production from the Norwegian Ibsen Company, these tensions between the present and the past are cleverly explored through a mash-up of English and Norwegian that reflects the characters’ differences and their recurring failures to understand each other.

Directed by Marit Moum Aune, this modern-day version sees British doctor Wangel (pronounced “wangle”) relocated with his two daughters, Hilde and Bolette, to the fjords of west Norway for the sake of his second wife, Ellida, a lighthouse-keeper’s daughter who is drawn to the wildness of the sea. Another Brit, sickly young neighbour Lyngstrand, is a regular visitor, dreaming of escaping south to become a sculptor while his health declines. English is the dominant language until Ellida’s old friend, and Bolette’s former tutor, Arnholm arrives and we hear the beauty of Ibsen’s original words (translated by back-projected surtitles). As Ellida reveals her obsession for a former lover presumed drowned in a shipwreck, her native tongue emerges as the language of her core identity, her past and her passion.

This is a play about people who are haunted by the past – a dead first wife, a lost child, a drowned soulmate – and deluding themselves with unrealistic dreams of escape. But it is also a drama about misunderstandings and the failure of communication which sometimes comes close to farce. Ibsen once referred to the play as a comedy, and Aune taps into this by creating what is easily the funniest Ibsen production I’ve ever seen (although there is little competition). Language is repeatedly misread from the start when Lyngstrand wrongly infers the girls are celebrating Ellida’s birthday rather than their late mother’s. Arnholm believes he has been invited to be given Bolette’s hand in marriage but in fact he has been brought in by Wangel to cheer up Ellida in the mistaken belief they were former lovers. Thanks to performances such as Marina Bye as Bolette and Molly Windsor as Hilde, the laughs keep coming but this risks overwhelming the darker, more serious themes. Edward Ashley, making his stage debut, stands out as Lyngstrand, both comic and tragic in his awkward, immature attempts to woo women while dreaming of becoming an artist despite his unadmitted terminal illness. Kåre Conradi is excellent as the avuncular Arnholm while Adrian Rawlins is gently moving as the hopelessly devoted husband. Pia Tjelta swings from listless to passionate as Ellida who really comes alive only when she speaks in her native language.

For a story about passions and dreams, this production misses out on emotional depth but the lack of connection between the characters certainly fits their world of miscommunication and hidden selves. This is matched by Erlend Birkeland’s impressive set where an expansive beach of sand and pebbles contrasts with the Wangels’ house represented by a small, enclosed wood-lined sauna. While the play’s darker, more expressionistic elements are diminished, this new production draws out interesting ideas around the limitations of language and the way it can keep us apart.

Running at The Print Room at the Coronet to 9 March 2019.