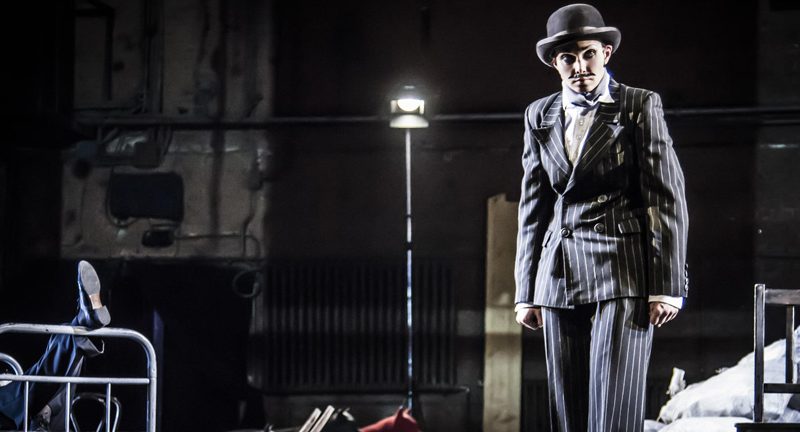 Russian director Yury Butusov has gained a reputation for visually stunning, imaginative re-inventions of classic plays from Shakespeare’s Richard III and Hamlet to a highly theatrical take on Chekhov’s The Seagull. His latest production breathes new energy and ideas into Bertolt Brecht’s The Good Person of Szechwan, which has been brought to London’s Barbican Theatre (with surtitles) after opening at Moscow Pushkin Drama Theatre in 2013. Using Paul Dessau’s score from the play’s 1948 production, Butusov combines music with bold imagery and his highly physical approach to performance for a passionate and powerful re-telling of Brecht’s parable.

In interviews, Butusov says  he was drawn to staging the classic play after meeting the acclaimed Russian actor Alexandra Ursulyak who he cast in the title role. Travelling to London with the production, she brings a mesmerising physicality to her portrayal of Shen Te, the prostitute who tries to do good to those around her after being blessed with a small fortune by the gods. But she finds that goodness alone does not allow for survival in a grasping capitalist society so she takes on the guise of a ruthless, uncaring male cousin, Shui Ta, who can step in to make tough decisions that are not guided by the heart. As Shen Te, she is an admirable if pathetic figure in smeared make-up, stumbling around in high heels, ripped stockings and a black PVC raincoat, but she disappears into her sharply dressed alter ego with his gangster hat and glued-on moustache. In this world where hunger and poverty are never far away, it becomes clear that good can exist only alongside bad and the two are irreconcilable. Butusov emphasises this duality through recurring projections of twins while, on occasions, managing to bring both Shen Te and Shui Ta on stage at the same time for an unsettling Doppelgänger effect.

Alexander Matrosov is impressive as Shen Te’s only friend, the water seller Wang, whose ability to communicate with the gods is explained by portraying him as a man with Down syndrome – a somewhat troubling allusion to the old myth linking the condition with supernatural abilities. The “illustrious” gods, represented by Anastasia Lebedeva as a lone gaunt figure, are not just “powerless” here but wounded and, for much of the time, lifeless. While Brecht wanted his theatre to highlight that injustices can be resisted, that change is possible, this show offers a more cynical vision where, according to one of Brecht’s songs, a just society will come only on “St Never’s Day”.

Although mainly set in a large city in the Chinese province of Szechuan, Brecht gave modern directors an excuse for not casting East Asian actors with his assertion that the location stood in for “all those places that man is exploited by man” – the kind of excuse that failed to impress critics of the lack of Asian casting in Howard Barker’s In the Depths of Dead Love, set in a mythic ancient China, at The Print Room two years ago. Taking full advantage of the expansive Barbican stage, designer Alexander Shishkin has created an austere set of leafless trees that suggests little of the Chinese setting but more of a bleak twilight world where the sun never shines, atmospherically created by lighting designer Alexander Sivaev.

There are rarely moments of stillness in this production where the actors are almost constantly in movement, based on what Butusov refers to as “behavioural plasticity”. This energy is soundtracked by a variety of music in styles ranging from jazz and blues to classical, played by a live band under musical director Igor Gorsky. Brecht and Dessau’s songs remain, mostly still sung in German out of respect for their poetry, but much more has been added including, surprisingly, Ryuichi Sakamoto’s sentimental melody from the Japanese-set film Merry Christmas Mr Lawrence. The musical accompaniment adds emotional power to this masterful re-imagining of a classic that is rarely staged in the UK, honouring Brecht’s deliberately theatrical style but with a visual flair that brings added beauty and excitement.