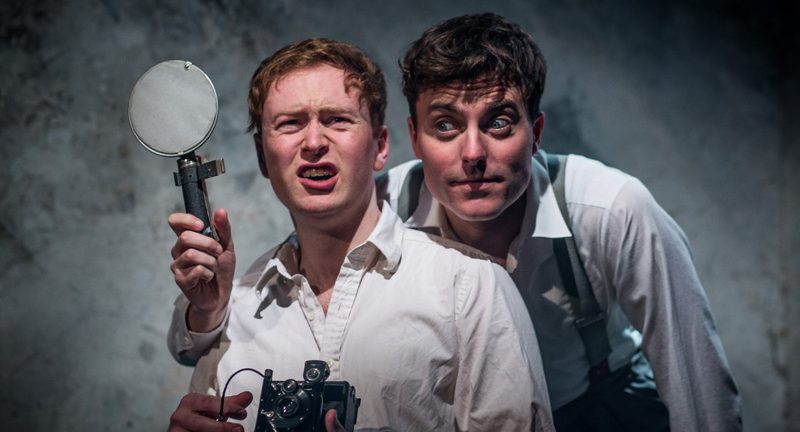 Islands inhabit a special place in the imagination. For Shakespeare’s Prospero, it is a place for magic and self-discovery, while it brings out the savage instincts of man in William Golding’s Lord of the Flies. They are also a place for transformation in David Greig’s 2002 play Outlying Islands which, thanks to Atticist theatre company, is enjoying its first UK revival since premiering at Edinburgh’s Traverse Theatre and London’s Royal Court. His unnamed island is in the Outer Hebrides, only a mile long and half a mile wide, located out in the Atlantic 40 miles from the mainland. Uninhabited by humans, it is visited by two young scientists, Robert and John, who have been hired by the government to carry out a survey of its wildlife including its fork-tailed petrels. Living in an abandoned chapel, they are alone except for the island’s dour old owner, Kirk, and his downtrodden grown-up daughter Ellen who are set to spend the summer in a nearby bothy, keeping an eye on the fresh-faced interlopers.

In its remoteness from civilisation, the island starts to exert its power on the young men who are deeply affected by the savage behaviour of the huge population of birds that fill the cliffs and skies. Nature’s amoral cruelty is embraced by Robert, who views the world like a lab experiment and already favours birds over people, while John struggles against it, clinging on to his British sense of decorum. Ellen undergoes the greatest transformation, emerging from under the control of her puritanical father to discover her own empowered identity that is as much a force of nature as the island – said to have been formed by a female giant hurling a stone out to sea. The mystical feel of the landscape is heightened by its “pagan” history and its manifestation as an otherworldly place where time has evaporated.

As in much of Greig’s work, this play reveals his interest in individuals in environments where they feel a mix of affinity and dislocation. Set in summer 1939, it captures a sense of history holding its breath before the cruel realities of war that potentially lie ahead for these three young people. The atmosphere is heightened by Christopher Preece’s excellent sound design, filling the space with the rush of swarming petrels and swirling winds. Close your eyes for a moment and you can almost feel like you’re on a remote storm-battered island with hundreds of birds massing overhead. Anna Lewis’s set fills the theatre space, evoking the desolate island and the bare shelter of the chapel.

Jack McMillan brings depth and humour to John, a buttoned-up Scotsman from Edinburgh out of his element in the wilds of the Outer Hebrides while Tom Machell gives Robert an engaging charm underscored by a psychopathic intensity. Ken Drury is suitably severe as the puritanical extremist, Kirk, who, despite his supposed Christian values, is concerned more about money and materials than the natural world around him – a key ethical question within the play. Rose Wardlaw is particularly impressive as Ellen, steadily evolving from a quietly obedient daughter to a self-possessed passionate woman as her circumstances change.

A few years after writing Outlying Islands, Greig wrote that he wanted to create theatre that “tore at the fabric of reality and opened up the possibilities of the imagination”. This new production, intelligently directed by Jessica Lazar, captures that drive to push at the boundaries of reality to explore themes around our place as individuals in relation to society and nature. Still fresh and vivid, this is a long overdue revival, preparing us for Greig’s work on the upcoming stage adaptation of Bill Forsyth’s film Local Hero where another outsider is transformed by the near-magical landscape of Scotland.