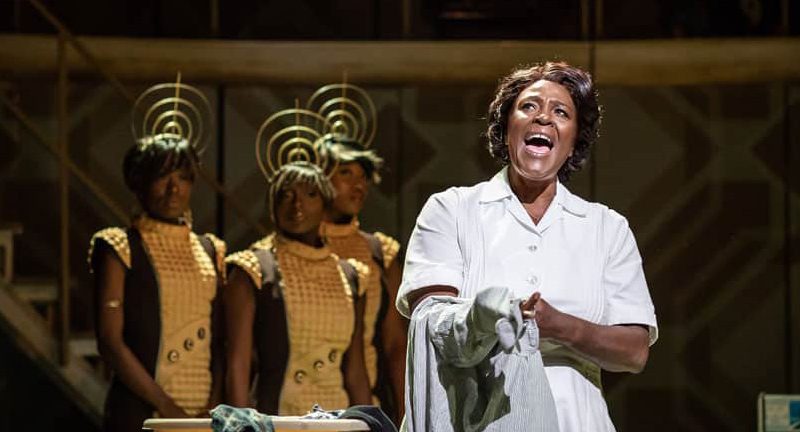 In Britain, we expect great musicals to have an epic sweep, tap-dancing through rollercoaster love affairs or striding through the crossroads of history. In contrast, Caroline, or Change starts as a small domestic story of a divorced single mum struggling to bring up four kids on the low wages of a maid. Drama emerges over what to do with the small change she finds in the dirty laundry of the family she works for, but this steadily opens up into a story with themes as epic as any big West End show.

Set over a few weeks in 1963, it is told against the backdrop of the assassination of John F Kennedy and the final throes of US racial segregation. The waves of history are slow to wash up in the small town of Lake Charles in Louisiana where Caroline, a black maid of 39, is drowning in disappointed hopes and dreams in the basement of the home of the white Gellman family whom she works for. The Gellmans have troubles of their own, with eight-year-old Noah struggling with the death of his mother, unsure about his new stepmum Rose and distanced from his still-grieving father. To Rose, it is “only a game” when she tells Caroline to keep the loose change she finds in the pockets of Noah’s dirty clothes to teach the boy the value of money, but for Caroline it becomes an agonising period of crisis about her life.

With book and lyrics by Angels in America writer Tony Kushner, Caroline, or Change tackles the economic oppression left over from centuries of slavery and segregation that meant that, despite the dismantling of Jim Crow laws, people of colour still tended to make up most of those working in service in the South. Although it is 15 years since the show was first performed Off-Broadway and 55 years after when it is set, African-Americans continue to make up a disproportionate number of those living in poverty. However, by the end of the show, there is an uplifting message of hope, with the growing civil rights movement promising there will be a better future for Caroline’s children.

Despite these weighty themes, the musical is peppered with humour and playfulness. Forget Beauty and the Beast’s singing clock and candelabra: here we have a washing machine and a dryer that come to life in Caroline’s mind, played by Me’sha Bryan and Ako Mitchell, alongside a 1960s-style girl group representing her portable radio, played by Dujonna Gift-Simms, Tanisha Spring and Keisha Amponso Banson, providing us with chorus-like commentary. In stunning costumes designed Fly Davis, they are part of a flawless 18-strong cast who do full justice to Jeanine Tesori’s music under musical director Nigel Lilley. Abiona Omonua stands out as Caroline’s daughter Emmie with powerful vocals and an engaging performance that confirms her as a face to watch. Lauren Ward is charming as Rose who is trying to win over her new stepson while struggling to apply her New York liberalism to having a black lowly-paid maid. When I saw it, Aaron Gelkoff played Noah with great comic timing and presence. However, it is Sharon D Clarke who is the big emotional heart of the show, playing Caroline with a quiet, dignity that keeps in check a passionate, angry soul driven underground by life.

Directed by Michael Longhurst, this production demonstrates why Caroline, or Change has been such a hit since it started at Chichester Festival Theatre in 2017 before transferring to Hampstead Theatre earlier this year. Not only is Clarke phenomenal with her voice and performance as Caroline but the show’s themes around economic inequality are as urgent today as ever. Its plot may seem small-scale at first, but it is epic in its celebration of the unsung heroines and heroes whose sacrifices and lives of quiet desperation were the foundation for the hard-won rights of today’s generation.