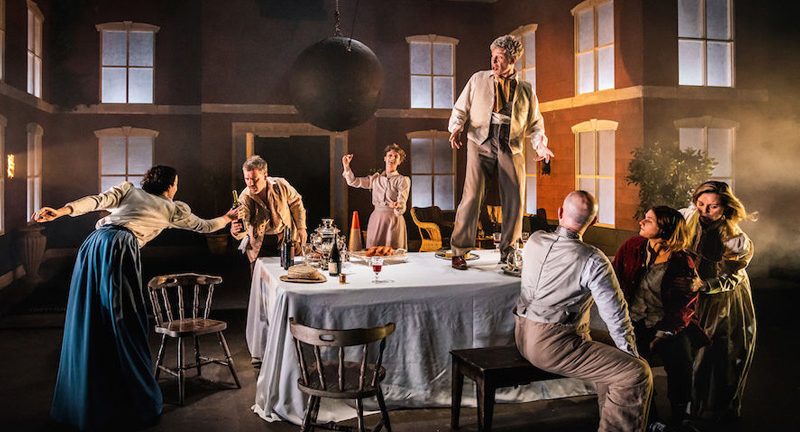 Before he revolutionised theatre, Anton Chekhov had a go at writing his first play at the age of just 19. Rejected for performance, it languished forgotten, without even a title, until it was published some years after his death. With too many characters and too much intricacy of plot, the play – now best known as Platonov – is considered unstageable although savage editing have led to excellent versions by David Hare and by Michael Frayn (who dubbed it Wild Honey). It has now provided the starting point for a funny, clever and highly inventive new show, Chekhov’s First Play, from Dublin-based theatre company Dead Centre.

It opens on a conventional naturalistic set depicting a 19th-century country house in the Russian countryside, familiar to anyone who has seen a traditional production of Chekhov. But we already know this adaptation is going in a different direction as, before the classic red curtain has gone up, the director Bush Moukarzel has told us he will be helping us understand the meaning of the play with a running commentary provided through the headphones that everyone in the audience is wearing.

It is not long before the cracks start to appear as the gloomy, troubled director begins to question his own creative decisions in adapting the play and even his own existence as a theatre-maker. Bit by bit, the show unpeals the layers of dramatic representation of reality so you no longer know what to believe. Written and directed by Moukarzel and Ben Kidd, it takes a wrecking ball to the fundamental assumptions that come with seeing a play, all told with a playful wit and visual flair. With a clever set design by Andrew Clancy, its impact is a testament to skilful work by Jimmy Eadie and Kevin Gleeson on sound, Stephen Dodd on lighting and Grace O’Hara on effects.

At the same time, it still attempts to extracts meanings from Chekhov’s work itself, drawing on motifs and themes from Platonov and his other plays and exploring how – and if – they can be made relevant to a modern audience. It is an exciting, original piece of theatre, boldly performed by Andrew Bennett, Tara Egan-Langley, Clara Simpson, Dylan Tighe, Breffni Holahan and Liam Carney. Their characters may become subsumed within the deconstruction and spectacle, with only echoes remaining of Chekhov’s first play, but they bring an impressive precision that make this a beautifully crafted eruption of theatrical chaos.