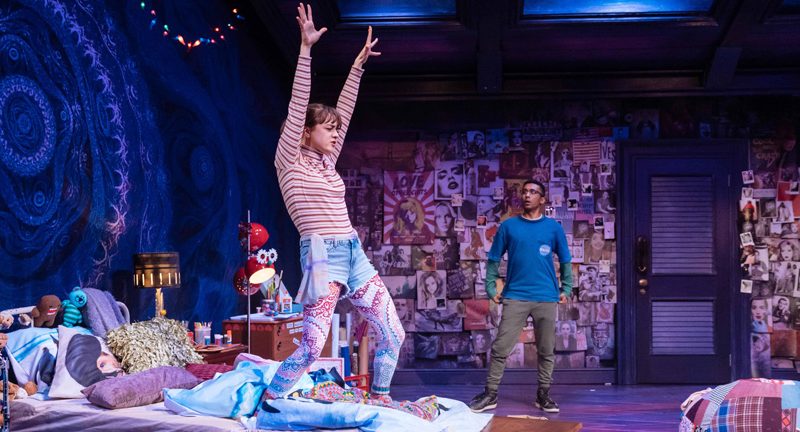 After Shakespeare, Lauren Gunderson was the most produced playwright in the US last year, partly thanks to her finely crafted play, I and You. First performed in 2014, this has now received its UK premiere at Hampstead Theatre, notable for marking the stage debut of young Game of Thrones star Maisie Williams.

With its focus on Walt Whitman’s poetic masterpiece Leaves of Grass, it is easy to see why I and You has been such a hit in America where this 19th-century classic is taught in nearly every school. The play presents the concepts of cosmic unity found in Whitman’s verses through the growing friendship between two 16-year-olds working on a school literature project about the use of pronouns in Song of Myself, the core poem in Leaves of Grass. Caroline is shut away at home because of a serious health condition, connecting with the outside world only through social media and texts, but she is forced to confront her fears by the arrival of Anthony who has volunteered to work with her on the project.

As they become increasingly engaged with Whitman’s transcendental philosophy, they move from being a simple “you” and “I” towards “we” through a greater understanding of each other’s lives and interests. The drama is touching and often funny but the power of the piece relies on a final plot twist that delivers an unexpected emotional punch.

But the play is more than just its finale, chiefly down to a brilliant performance by Williams as Caroline who is “small and bites like a Dachshund”. In an assured stage debut, she brings intensity and sparkle to the role, mixing fierce independence with an unsentimental vulnerability. She is well matched by Zach Wyatt, also impressive in what is his professional stage debut, giving Anthony a youthful exuberance and charm.

Directed by Hampstead Theatre’s artistic director Edward Hall, I and You captures the uncertainties and glorious idiosyncrasies of being a teenager, with Caroline’s creative spirit and potential reflected in her inventively messy bedroom, designed by Michael Pavelka with lighting by Matt Haskins. While the final coup de theatre risks overshadowing what has gone on before, the play charts Caroline’s journey from being shut in emotionally and physically to seeing the bigger picture and embracing the immensity of life and death expressed in Whitman’s poetry. It also confirms Williams, after seven years playing Arya Stark, as an actor with the talent to shine on stage just as much as in front of a camera.