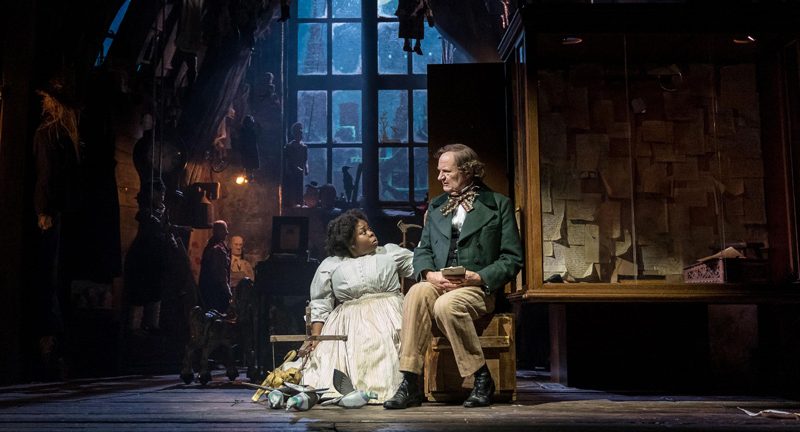 Hans Christian Andersen is responsible for handing down to us some of the greatest and best-loved stories of Western culture from The Ugly Duckling to The Little Mermaid but Martin McDonagh’s new play, A Very Very Very Dark Matter, inventively questions the process of storytelling and what goes untold. Set in the latter half of the 19th century, it reveals that Denmark’s master of fairy tales is stealing all his ideas from a Congolese “pygmy” woman he keeps imprisoned in his attic in a wooden box. He takes her writings such as The Little Black Mermaid and tweaks them to fit his own narrow-minded world view and the expectations of his adoring fans. Grotesquely, he has even chopped off one of her legs to swap it for a “haunted concertina”. But he is not alone: in a visit to England, he discovers that Charles Dickens has had the woman’s sister locked in his own attic, churning out stories and novels that he then claims as his own.

This concept of black women imprisoned, multilated and exploited by two white male behemoths of European literature is unsettling, especially in a play that successfully aims for plenty of laugh-out-loud humour. But this is no surprise from the writer of very dark comedies such as The Lieutenant of Inishmore and Hangmen. Here, McDonagh playfully explores how colonial impulses have silenced black voices and refashioned history to leave out atrocities such as the genocide of an estimated 10 million people by Belgium in its invasion and oppression of the Congo in the 19th century.

McDonagh also undermines the status of heroes of literature, portraying Denmark’s lionised writer as self-obsessed and dim and highlighting Dickens’s careless womanising. There is joy in seeing the great Victorian novelist and his saintly wife Catherine effing and blinding to excess over the dinner table, surrounded by their children, as they desperately try to drive away the boorish Andersen who has long outstayed his welcome.

Jim Broadbent is brilliant and funny as the self-satisfied Andersen, blissfully unashamed of his extreme act of exploitative plagiarism. American actor Johnetta Eula’Mae Ackles brings dignity and strength to the potentially troubling character of the Congolese woman who, typically, has been stripped of her African name and dubbed Marjory. Dickens and his wife are hilariously brought to frank, colourful life by Phil Daniels and Elizabeth Berrington while Ryan Pope and Graeme Hawley intriguingly play two blood-covered Belgians from the future – part of a time-travelling element that complements the gravelly voiced narration recorded by American singer Tom Waits.

Boldly directed by Matthew Dunster, this gothic fable is told against the haunting backdrop of Andersen’s attic, filled with near life-size puppets, all strikingly designed by Anna Fleischle and uncannily lit by Philip Gladwell. It contributes to an unforgettably grotesque vision that borders on nightmare, leaving you unsettled and uncomfortable despite the pleasure of the play’s broad comedy.