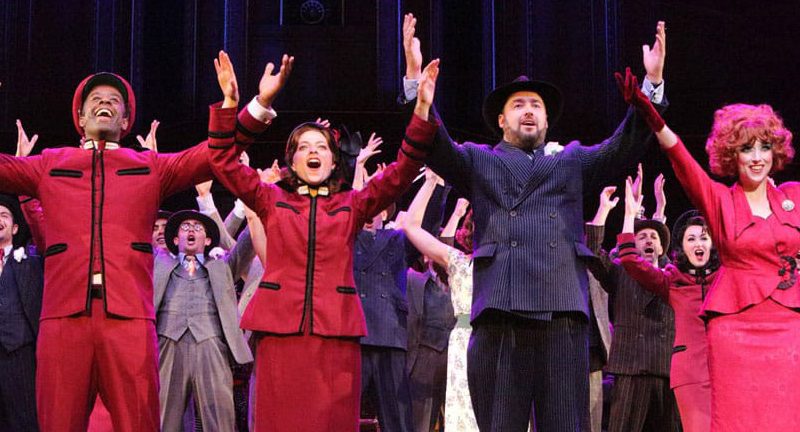 There have been some phenomenal productions of the classic Broadway musical Guys and Dolls in Britain, from Richard Eyre’s unforgettable version at the National Theatre in 1982 to Chichester Festival Theatre’s acclaimed staging four years ago. Filled with showstoppers and joy, they were clearly missing one thing: a full orchestra to lift Frank Loesser’s music to new heights.

With the Royal Philharmonic Concert Orchestra, choreographer and director Stephen Mear has created a semi-staged production that distils the story, with characters and comedy intact, while emphasising the melodic richness of the music. Under musical director James McKeon, the arrangements combine the jazzy swing of the brass with the driving expressiveness of the strings to create the perfect sound for this mid-century urban fable.

Much of the choreography of a fully staged production has inevitably been lost, although the stage is no less populated with its 30-strong cast. But, with an accomplished choreographer like Mear on board, we are thankfully treated to some stunning dance sequences, chiefly by the ensemble of 16 “crap shooters” in the ballet sequence for Luck Be a Lady. Running at around two hours excluding interval, the abridged action is supplemented by narrator Stephen Mangan filling in the gaps with a Noo York accent in the style of Damon Runyon whose short stories were the basis for the show.

The period is captured beautifully by sharp, glittering costumes from designer Morgan Large and wigs and hair by Richard Mawbey, conjuring up late 1940s Broadway on a mostly prop-less stage. The world of gamblers and hoodlums has been transformed into romance by Jo Swerling and Abe Burrows’s book, brought to life with rugged charm by the fantastic cast. Adrian Lester is the charismatic Sky Masterson, a professional gambler who meets his match in the emotionally guarded Mission “doll”, Sarah Brown, played by Lara Pulver. As their rocky romance blossoms, fellow gambler Nathan Detroit navigates his way round town trying to arrange a major crap game while avoiding marriage to Adelaide after 14 years of engagement. His treatment of his fiancée could be seen as cruel but he is a loveable rogue in the hands of comedian Jason Manford while cabaret star Meow Meow is a revelation as Miss Adelaide – very funny and often heart-breaking in her deep devotion to the man she loves, most notably seen in the show-stopping Adelaide’s Lament that showcases her vocal abilities. Other highlights include her glittering, saucy performances at the Hot Box club, accompanied by six dancers, in A Bushel and a Peck and Take Back Your Mink. The action may be male-led but Mear makes sure Adelaide and Sarah are fully formed independent women who have their own personal stories.

Clive Rowe stands out as Nicely Nicely Johnson, particularly in another showstopper, Sit Down You’re Rockin’ the Boat, while Sharon D Clarke shines in the small role of Mission boss General Cartwright. With Paul Nicholas as Sarah’s grandfather Arvide Abernathy, Joe Stilgoe as Benny Southstreet and other talented musical theatre performers in the cast, every role matters in this masterful production. As ever with the Royal Albert Hall’s musical theatre concerts, it is just a shame it had only three performances.