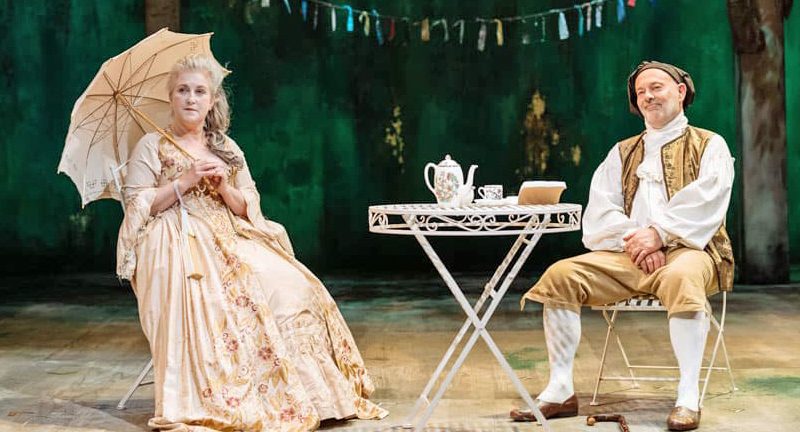 In Nick Dear’s 1986 play The Art of Success, he explored the role of the artist in society through the painter and engraver William Hogarth in a broadly comic, near-farcical story full of energy and incident. In its sequel, The Taste of the Town, we re-join Hogarth in the twilight of his years, more contemplative and less energetic but just as impassioned about his craft. Although the new play can be viewed as a stand-alone piece, it has received its world premiere as a companion to a revival of the earlier play, expanding on many of its themes while exploring new ones, all written in the same vernacular, often anachronistic style.

Despite the thematic echoes, few of the same characters have survived. While Dear originally presented us with Hogarth in his exuberant early 30s around 1730, more than three decades have passed and he is now settled in his grand out-of-town house in Chiswick with devoted wife Jane and her irascible mother. Despite success from his engravings such as A Rake’s Progress and Marriage A-la-Mode, he yearns for respect for his abilities as an oil painter, hoping for recognition through his latest magnum opus, Sigismunda Mourning Over the Heart of Guiscardo. His status as an outsider of lowly birth, touched on in The Art of Success, troubles him more now, with critics dismissing him as just a “sign writer” and “Hogarth of Smithfield Market”. “I used to be at the centre of things,” he laments. “I’m now just a smudge in the margin.” His concerns about leaving a legacy have become even more pressing as he and Jane have no children.

At the heart of the play is his anger at a scathing critique by the writer, Horace Walpole – the son of his sometime ally in the first play, prime minister Robert Walpole. Hogarth’s progress sees him embark across the countryside to the younger writer’s nearby gothic home, Strawberry Hill, to confront him in his ornate lair. While The Art of Success pondered who owns a piece of art – the artist, the subject or those who buy copies – The Taste of the Town also looks at who controls a work of art: its creator or the buyer.

Social mobility is explored through Hogarth’s friendship with the actor and playwright, David Garrick, who has also risen from a lower middle class background. More at ease with his ability to rub shoulders with the elite, “Davey” has also been an agent of artistic change through his efforts to introduce realism into acting. What drives Hogarth is an urge to establish an English or British style of art equal to that in continental Europe, which feels especially timely as our national identity comes under the Brexit spotlight.

Social change is also at the heart of Jane’s progress through the play. Perhaps as a response to the misogyny expressed by characters in The Art of Success, we see her move out of the shadow of her older husband and away from the traditional values of her overbearing mother into the proto-feminist world of the educated, intellectual women of the Blue Stockings Society.

In this respect, this second play is more about the Hogarths’ progress, with Susannah Harker impressive as she takes Jane on the journey towards greater independence while still very much in love with her husband. Keith Allen excels as a grumpy older Hogarth, still filled with fiery passion as he faces competition from a younger generation led by the portraitist, “Josh” Reynolds. Sylvestra Le Touzel is very funny as Jane’s mother, Lady Thornhill, snapping with witticisms like a cross between Lady Bracknell and Downton Abbey’s Dowager Countess, later balanced by a more touching, sombre tone.

All the cast of the first part of the double bill return for The Taste of the Town, with Mark Umbers suitably magnificent as the charming, grandiloquent Garrick and Ruby Bentall and Emma Cunniffe memorable as a pair of “bluestockings”. Ian Hallard makes an amusing appearance as Horace Walpole, a foppish privileged aesthete who clearly has genuine admiration for the artist who has taken against him.

Again directed by Anthony Banks, The Taste of the Town is inevitably a more sedate, reflective piece, infused with the imminence of decline and death, but it is just as sharply written with plenty of comedy to match. Alongside Andrew D Edwards’ set and costumes, the production makes good use of Douglas O’Connell’s striking video projection, evoking a rural escape to contrast with the frenetic urban setting of The Art of Success. As a pair, the two plays are an intelligent and very funny exploration of what it means to make art – ideally seen as a double bill over one day.