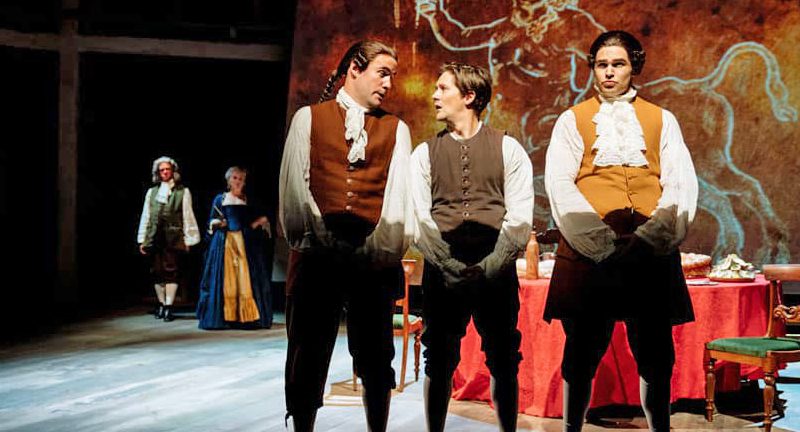 All the chaotic energy of 18th-century London bursts onto the stage in the spirited revival of Nick Dear’s 1986 play The Art of Success. From brothels to Vauxhall Pleasure Gardens to Newgate prison, it follows the progress of the great English engraver and painter William Hogarth, mostly over the course of just one day. With a cast of characters ranging from prostitutes to the prime minister, it has the black comic reach of some of his most famous moral works from A Harlot’s Progress to Gin Lane – what the novelist Henry Fielding referred to as “comic histories”.

There are wigs, wit and Georgian costumes but this is no respectful period piece. It is obscene, scatological and full of anachronistic language that emphasises how many of Will Hogarth’s concerns resonate today. As an artist, he struggles with the timeless tension between wanting to create what he wants and needing to earn money as well as his desire to gain the adulation of the upper classes while appealing to a wider audience including the less educated. His passion for creating an English or British style of art equal to that in continental Europe feels especially timely as our national identity is under the Brexit spotlight.

Inspired by the real-life portrait of murderess Sarah Malcolm, Will’s efforts to draw a famous convicted prisoner lead to questions about who has the rights to their own image – the painter or their subject – and where the value lies in a work of art when it can be turned into a mass-market print. With copies of Hogarth’s work on the walls of homes across 18th-century Britain, we are reminded that he led the campaign for copyright legislation to encompass the visual arts.

Coming from a lower middle-class background, Will’s talent has catapulted him into the world of aristocrats and politicians but, in Dear’s play, this social mobility is uneasy. He is still a “mongrel” outsider whose work dares to satirise and condemn the society that provides him with a living. Played brilliantly by Bryan Dick, Will is a man doing his best to navigate the vagaries and complexities of modern life, not least his society’s ingrained misogynism and disregard for the poor.

Ruby Bentall is very funny as his wife Jane, discovering the possibilities of her own independent mind and the joys of sex. They are complemented by a rich cast of sharply drawn characters, from Mark Umbers’ bombastic prime minister Robert Walpole and Ian Hallard’s puffed-up aristo Oliver to the proudly individualistic prisoner Sarah, powerfully played by Jasmine Jones, and prostitute Louisa in a touching performance by Emma Cunniffe. With a faint West Country burr, Jack Derges is charming and funny as the idealistic Fielding who comes up against the state with his own satirical works – his writing is often credited with being the trigger for 250 years of theatre censorship.

Will Hogarth’s world is brought to colourful life by Douglas O’Connell’s video projection and James Whiteside’s clever lighting design as part of the spare but expansive set devised by Andrew D Edwards, soundtracked by Olly Fox’s driving musical score. The Art of Success will be a particular joy for anyone interested in 18th-century culture and history (like myself) but, directed by Anthony Banks, this comic history has an exuberant charm that is hard to resist.