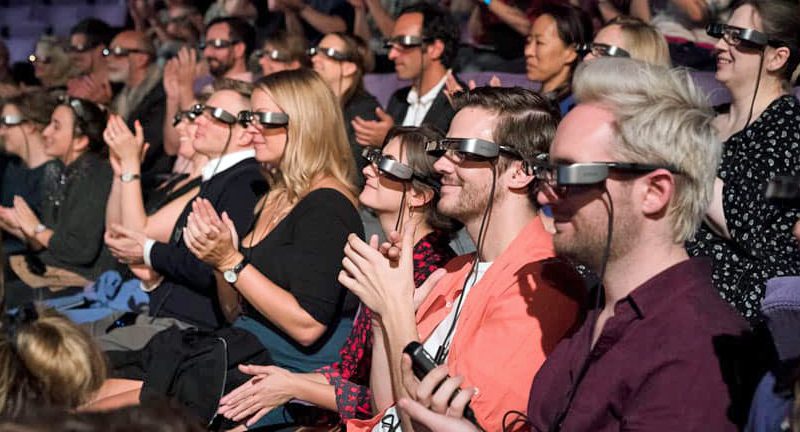 Mark Ludmon tries out the new smart caption glasses launched by the National Theatre for people with hearing loss.

The National Theatre has opened up access for people who are deaf or hearing impaired with the launch of high-tech “smart” glasses that allow wearers to see captions for any performance.

After four years of research, development and testing, the revolutionary technology allows people to see a transcript of dialogue and sound transmitted via Wi-Fi directly onto the lenses of the glasses.

The captions respond to the actors’ speech, lighting, sounds, video and other cues to provide a synchronised service without people needing to look at a caption screen above or next to the stage.

They can be booked out for free from this week, initially providing captions for Exit the King and Hadestown in the Olivier but, by the end of this month, for all shows across the venue’s three theatre spaces, such as Antony and Cleopatra and David Hare’s I’m Not Running, and over 95% of all future productions.

The glasses will also be tested during the UK and Ireland tour of Rufus Norris’s production of Macbeth in January, including Glasgow Theatre Royal, Nottingham Theatre Royal, Hull New Theatre and the Marlowe Theatre in Canterbury in Kent.

The service will also be available at Leeds Playhouse in 2019 through a collaboration with the National Theatre as a first step to making the technology available in other theatres across the UK. It will be offered at the Leeds theatre’s productions of Around the World in 80 Days, Be My Baby and Hamlet starring Tessa Parr in the title role.

The National’s executive director, Lisa Burger, said: “A huge priority for us at the National Theatre is opening up the National to everybody and offer lots of opportunities to see performances and engage with what we do. One of the areas we were aware we really hadn’t made much progress was for people with hearing loss apart from focusing on providing live captioning but only two or three performances and never on press night.

“We want people with hearing loss to be able to come to the National with family and friends to any performance and sit where they like, like everybody else.”

She stressed that it was an additional alternative for people with hearing loss and that the National Theatre would continue to offer open captioned performances, audio described performances, pre-show touch tours, BSL signing, relaxed performances, cast lists in large print and Braille and an infrared audio loop system with both headsets and neck loops.

The technology is also being extended so that it can be used for live captioning for events such as talks with theatre directors and actors and drama workshops for younger performers and families. The National Theatre also hopes to use it in the future to provide translations of productions, such as for non-English speakers.

The Open Access Smart Capture technology for the Epson Moverio BT-350 glasses was developed by the technical department at the National Theatre, led by technical director Jonathan Suffolk, with experts from the Accenture Extended Reality group.

They worked with Professor Andrew Lambourne, a renowned specialist in live subtitling, and StageText which provides theatre captioning. Over the past year, the technology has been tested with audience members with hearing loss.

One of those involved was Dave Finch who experienced sudden hearing loss around seven or eight years ago. “As a result, I virtually stopped going to the theatre,” he said. “It was just too much hassle.” It also led to him giving up his front-of-house role at the Hazlitt theatre in Maidstone in Kent.

He had troubled experiences of using infrared audio systems which sometimes did not work properly, especially as the small amount of hearing left to him meant he could often make out only “a mish-mash of noise”.

“Captioned performances are excellent but of course you are looking at screens, looking from side to side, sometimes to the top. You are certainly missing some of the movement, some of the facial expressions and gestures from the performers.

“As soon as you put the glasses on, you can tell it’s a major advance from what I have been using in the past. Everything is centre stage and you can focus forward. In future I will be able to attend any performance. StageText are very few and far between.

“You can sit anywhere in the theatre. You can sit with your friends. I will never get my hearing back but the glasses are the next best thing for getting that involvement in the performance again.

At present, the National Theatre has 90 pairs of the glasses across the three spaces, which need to be booked in advance via nationaltheatre.org.uk/smartglasses but, in the future, they hope to make them available without pre-booking in the same way as infrared audio systems. They are also investigating if it is possible to use the glasses to offer BSL signing.

We were given a chance to try out the new smart caption glasses at a presentation of the first 15 minutes of Exit the King in the Olivier Theatre, starring Rhys Ifans and Indira Varma.

The first time you use them, theatre staff explain how they work and recommend you go through a short tutorial using the glasses’ small wired control touchpad – with a “help” option to summon someone to your seat before the show if you are having problems.

You can adjust the size of the text, whether it’s aligned centrally or from the side and where it appears from top to bottom. There are six colours, from white to red, yellow, green, purple and blue. I found it worked best in white at the bottom although of course it depends on your head position where the text appears overlaid on the action.

Text can be seen one line at a time or scrolling across three lines. The latter was certainly the best option, especially as you sometimes get a slight lag which means text appears quickly. If an actor should (dare I say it) skip a few lines, the technology very quickly recognises where they have jumped to in the text and speeds through to that point.

You can adjust all of these at any time so, if a scene change produces a background with the same red that you’ve chosen for your text, you can quickly change it to a more suitable colour.

The glasses can be worn over existing glassware. They have been cleverly designed so that the text appears the equivalent of about seven metres away so that the eyes aren’t having to deal with extreme differences between close-up text and a distant stage.

The batteries currently last just over four hours – long enough for most theatre productions. And most of all, the glasses are lightweight and adjustable so that they don’t cause any discomfort on the bridge of the nose.

We referred to these new smart caption glasses at the start as “revolutionary” as they are indeed a fantastic piece of technology which, if rolled out, will open up theatre for so many more people.