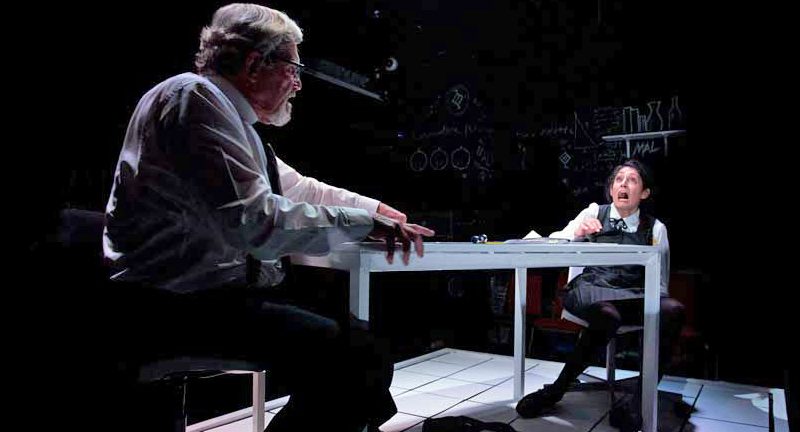 The Lesson begins straightforwardly enough: a young woman turns up at the home of a learned professor eager to be tutored ahead of some exams. But this is the world of Eugène Ionesco, the master of French absurdist theatre, and nothing is ever that simple.

First performed in 1951, it was one of the most notable examples of a new experimentation in form and characterisation that Ionesco more famously explored in later plays such as Rhinoceros and Exit the King (currently playing at the National Theatre). As the professor takes his pupil through topics from mathematics to linguistics, the lesson becomes an exploration of power, taking a horrifying turn as he starts to use his position and knowledge to dominate and oppress her. It hints at a political dimension, drawing comparisons with the relationship between demagogues and the populace – a theme that remains topical 67 years on.

Reflecting Ionesco’s delight in the meanings of words, the increasingly surreal lesson leads you to question the fundamentals of language and communication. In maths, the pupil prompts us to realise that numbers are more than just a unit but have shape and other qualities, that three really could be greater than four. In philology, the professor confidently dazzles us with his bewildering thesis that words are the same in all languages but with different meanings depending on geography – given extra resonance by this being translated from French.

Using the classic translation by Donald Watson, director Matthew Parker demonstrates a masterful understanding of Ionesco’s work in this fresh, lively production. Against Rachael Ryan’s pristine white set, the play takes us down a murky path with an unsettling, disturbing soundscape designed by Simon Arrowsmith. For all its more chilling elements, Parker’s production is genuinely funny, picking up on plenty of opportunities for laughs – even when you know you should be horrified.

Roger Alborough is excellent as the professor, riding the ebbs and flows of Ionesco’s language as he shifts from avuncular charm to something more threatening. As his eager young pupil, Sheetal Kapoor captures the broad, absurd comedy of a teenage girl who can multiply billions but can’t count beyond 16. The strong cast is completed by Joan Potter as the maid whose relationship with the professor offers a further layer to the play’s examination of power. In the hands of a director who clearly grasps the peculiar demands of Ionesco’s writing, this production is an unmissable opportunity to see an absurdist classic done well.