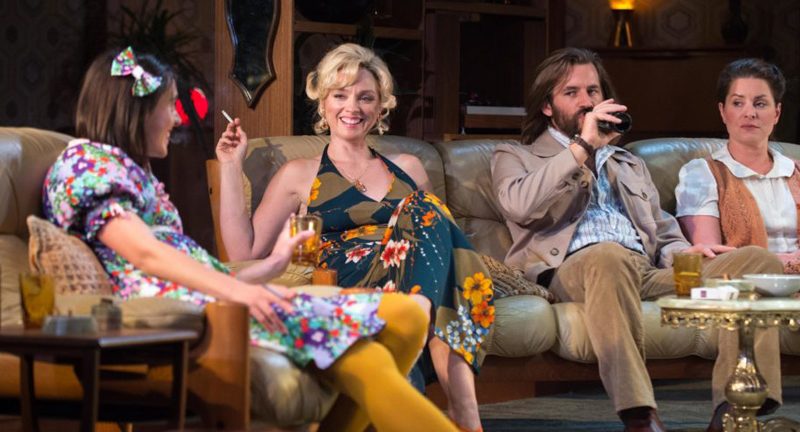 With new productions at the Queen’s Theatre Hornchurch and Hull Truck Theatre this month, Mark Ludmon examines the continuing popularity of Abigail’s Party for BritishTheatre.com

With its dissection of marriage and social mobility to the sounds and tastes of the Seventies, Abigail’s Party was very much a play for its day when it was first staged in 1977 at London’s Hampstead Theatre. Attitudes to class and the impact of “women’s lib” and other changes in society were played out in the painfully awkward drinks party hosted by Beverly and her husband Laurence for their neighbours, young couple Ange and Tone and Sue, escaping her 15-year-old daughter Abigail’s eponymous party down the road.

After it was adapted for BBC1 later that year, it was such a hit that it was broadcast several times, with one repeat gaining 16 million viewers (boosted by storms and an ITV strike), putting it firmly on the path to becoming a modern TV classic. Despite being rooted so firmly in the 1970s, it has continued to resonate with audiences over the decades, with regular revivals, including this month’s new production at the Queen’s Theatre in Hornchurch in east London which will transfer to Derby Theatre and Salisbury Playhouse. Later this month, another new production opens at Hull Truck Theatre, directed by Amanda Huxtable as part of Arts Council England’s Change Makers programme to support the development of black, minority ethnic and disabled cultural leaders.

Much of the play’s success is down to Leigh’s script, developed through improvisations with the original cast, capturing everyday speech and injecting it with comedy and a satirical sparkle. At the heart of this is Beverly, who has become a genuinely iconic character of British comedy, a social-climbing monster driven by insecurity and a desire for a better life. Originally played by Alison Steadman, she has been brought to the stage more recently by actors including Elizabeth Berrington, Jill Halfpenny, Hannah Waterman, Amanda Abbington and even Hollywood star Jennifer Jason Leigh (see below).

As well as being simply “a damn fine play”, it is Beverly and the other characters that contribute to its enduring appeal 41 years on, says Douglas Rintoul, director of the new production at the Queen’s Theatre which is located near the London-Essex border where the action is set. “It still elicits an extraordinary response from audiences because its rich, recognisable characters and their struggles with, then, new societal ‘norms’ still ring true.” He points out that Abigail’s Party was unusual for its time. “It looked to the suburbs and shone a light on a New Britain – one of individualism and materialism, one that ushered in Thatcherism. Four decades later, the consequences reverberate on. Leigh’s play gives us a mirror to reflect on our times.”

Proving this point, Derby Theatre commissioned a “response” to the original play from writer Atiha Sen Gupta, part of its artistic director Sarah Brigham’s Retold series of new one-woman plays inspired by classic works. Set in 2018 and featuring Abigail’s grand-daughter, Abi picks up on themes and motifs to explore the experience of a 15-year-old girl of mixed heritage growing up in the suburbs of east London. “It looks at the consequences of the previous generations’ choices and how, four decades on, they still influence young people’s lives,” Rintoul adds.

Running as a companion piece to Abigail’s Party at the Queen’s Theatre until September 22, Abi starring Safiyya Ingar will join the main play in its transfer to Derby Theatre from 29 September. In her notes to Abi, Brigham highlights some of the reasons that Abigail’s Party is still relevant 41 years later. “There are a lot of similarities between 1977 and 2018, the most striking being that, in 1977, we were two years from deciding to join the EU and now we are two years from deciding to leave. With Atiha, I posed the question: what do the 15-year-olds have to inherit? We have mined the text of Abigail’s Party, picked up the themes and considered what is to be said about this today.” Yet another new production is scheduled for April next year at The Orchard Theatre in Dartford in Kent starring Jodie Prenger as Beverly.

Hull Truck’s new production, with Katharine Bennett-Fox as Beverly, runs from 27 September to 20 October, aiming to provide a “new take” on the well-loved play, according to director Amanda Huxtable. “As we move into a new era for Britain, questioning who we have become and who we would like to be, I think it’s well worth taking the time to venture back and explore our journey to where we find ourselves today,” she explains.

In an interview in The Guardian in 2009, Leigh tried to explain the continuing popularity of the play. “It still hits a nerve about the way we live,” he said. “It’s about aspirationalism and materialism, love and relationships. Like much of my work, it’s about the disease I call ‘The Done Thing’ – basically, keeping up with the Joneses.” After visiting Salisbury Playhouse from 30 October to 17 November, Rintoul’s new production ends its run from 27 to 29 November at the Grand Theatre of Les Théâtres de la Ville de Luxembourg, which is run by UK-trained actor Tom Leick-Burns. After the play’s homecoming to its spiritual roots in east London, it will be interesting to see what the people of Luxembourg make of Beverly and her cheesy-pineapple snacks on a stick.

Published on BritishTheatre.com on September 9, 2018