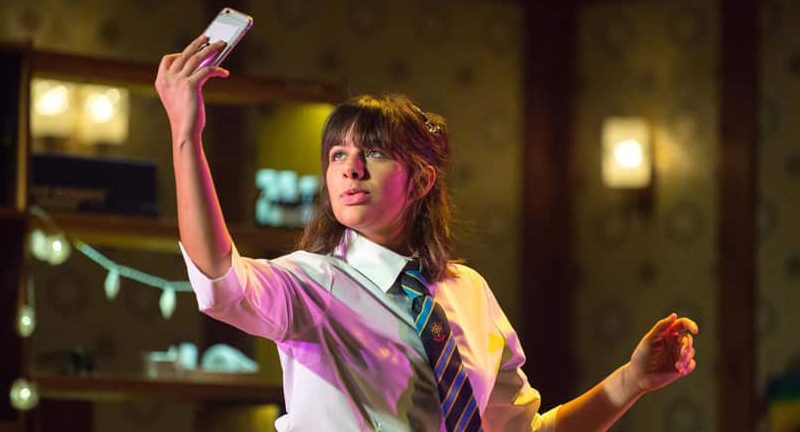 It is 41 years since Mike Leigh first gave us the unforgettable characters of Abigail’s Party. The TV drama, based on the original hit stage production, is as popular as ever so it was surely only a matter of time before somebody pondered what happened next. Atiha Sen Gupta’s new piece, Abi, isn’t exactly a sequel but more a contemporary “response”, echoing many of the themes and motifs and referencing some of the characters. It explores what it means to be a teenage girl on the brink of adulthood in 2018 through the character of Abisheera, or Abi – the grand-daughter of the 15-year-old Abigail whose house party drove her mum Sue to seek refuge in the house of her neighbours Beverly and Laurence.

Abi was commissioned by Derby Theatre as a companion piece to Douglas Rintoul’s new production of Abigail’s Party at Queen’s Theatre Hornchurch, near Romford, on the border with Essex where the original play is set. It is part of Derby Theatre’s Retold series of one-woman plays that respond to classic works from a female perspective. In 2018, Abi is a confident 15-year-old “half-Asian” girl looking forward to having her own friends round for a house party in her nan’s house. Beverly’s cheesy-pineapple snacks may have been replaced by Cheese & Onion Pringles and there is now a modern bright-red sofa, but the backdrop is largely still the same 1970s living room, designed by Lee Newby for Rintoul’s production. It’s not clear if Abigail moved into Beverly and Laurence’s old house or if this simply represents her own Romford home but it reflects how Abigail – now 56 and laid up in hospital – is haunted by the Seventies and her teenage years.

Like Beverly, young Abi loves to dance, although 1970s disco hits have been replaced by Rihanna and Bruno Mars. Just as Abigail’s Party is concerned with the roles of men and women in relationships in the age of “women’s lib” and social change, Sen Gupta’s new play looks at the impact of dating in a digital age of Instagram and WhatsApp, where young people can develop a relationship online before even meeting in real life, or “IRL”, as Abi puts it. Her house party is a chance for her to finally get together for the first time with a mysterious older man, Luke, whom she has been “dating” digitally, picking up on Leigh’s exploration of masculinity in Abigail’s Party. Alongside these echoes of the 1977 play, Sen Gupta also focuses on the complex bonds between mothers and daughters and the experience of being a girl of mixed heritage in modern Britain.

The strength of this new 60-minute solo show owes much to a powerful, often funny performance by Safiyya Ingar, under the direction of Sarah Brigham, artistic director of Derby Theatre, creating a much more likeable character than many found in the world of Mike Leigh. From childlike exuberance to more thoughtful insights, she engagingly plays a girl navigating the challenges of growing up at a time of new opportunities and new dangers. While Abi and her family are haunted by the past and the events of a Saturday night in April 1977, its legacy emerges as a positive force thanks to inspirational, independent female role models like Abigail. Abi may not have the subtle brilliance of Leigh’s writing, or indeed Demis Roussos, pilchard curry and cheesy-pineapple snacks on a stick, but it is a must-see for any fans of Abigail’s Party that will make you look at the original play in a new light.