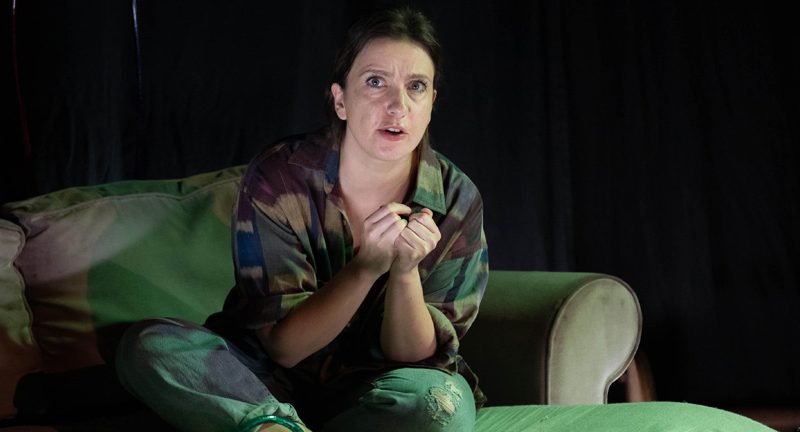 Sat hungover on a shabby sofa-bed, Brenda is stuck. She is finding it as hard to escape the place where she grew up as she is to get over the break-up of her last relationship. In her new play Drip Feed, Karen Cogan tells the story of a lost soul living in the close-knit city of Cork in the 1990s, lurching from a dull dead-end job to drunken nights-out with her best friend Veronica. At 34, Brenda is finally confronting what her life has come to and how she can move on.

Directed by Oonagh Murphy, Drip Feed is full of dry, dark humour, with a strong, engaging solo performance by Cogan herself. Brenda’s story starts with her hiding outside her ex-girlfriend Olivia’s house, balanced precariously on a wheelie bin, and it is this kind of vivid detail that lies at the heart of the story’s appeal. There is rugged beauty to the writing, edging into a poetical lyricism while talking with brutal honesty about the ups and downs of Brenda’s life.

Produced by Soho Theatre and theatre company Fishamble, Drip Feed is very funny while dealing in an understated way with darker themes such as obsession, mental illness and loss. Brenda touches on her queer identity and the occasional homophobia she encounters but this is more about a woman facing up to change and trying to find a more hopeful future for herself.